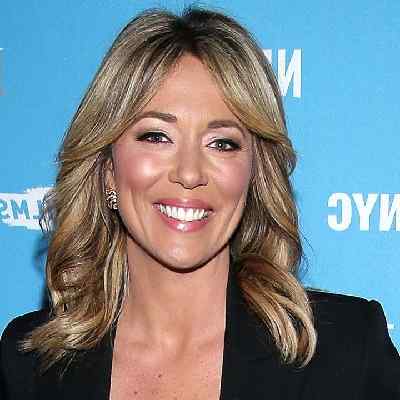 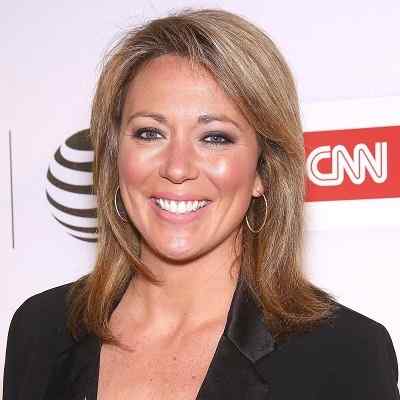 Brooke Baldwin is an American journalist as well as a television host who has been on CNN since 2008. Brooke Baldwin hosts CNN Newsroom from 2 pm to 4 pm ET.

The CNN anchor Brooke Baldwin tested positive for COVID-19 in April of 2020. CNN’s Global staff has also shared a personal essay covering here story of Covid-19. She anchors the 2-4 p.m. edition of CNN Newsroom. Based in New York, she got recently diagnosed with coronavirus. It took her a full two-week beating on her body. She went to some very dark places, mainly at night. Evenings bring on a weird sadness, which was individually odd for her.

However under the influence of coronavirus, as each day came to a close, she often cries, unable to stave off the sense of dread and isolation. Baldwin stated the illness frequently brought her to tears. She even uploaded many pictures of herself during her self-isolation and sickness ultimately on social media handles. She remembers how bad she felt, physically, and emotionally. However, she is quite fine currently.

She remembers how she felt when the pandemic was first taking hold of the country and her beloved adopted hometown of New York City. She had a job to do. As a journalist, her focus and sense of purpose galvanized during times of pressure. She felt a deep responsibility to tell the stories of this pandemic, to connect with the viewers to show them the human faces facing this crisis right along with them.

In the few days, before she got sick, she even interviewed former Vice President Joe Biden. He talked about the urgency of flattening the curve. And also interviewed a woman named Michelle Bennett who had just said her last goodbyes through FaceTime to her COVID-infected mother. And she spoke with a nurse at Lenox Hill Hospital in New York City, Emily Fawcett who was buoying each other’s spirits between difficult shifts serving patients fight the virus. 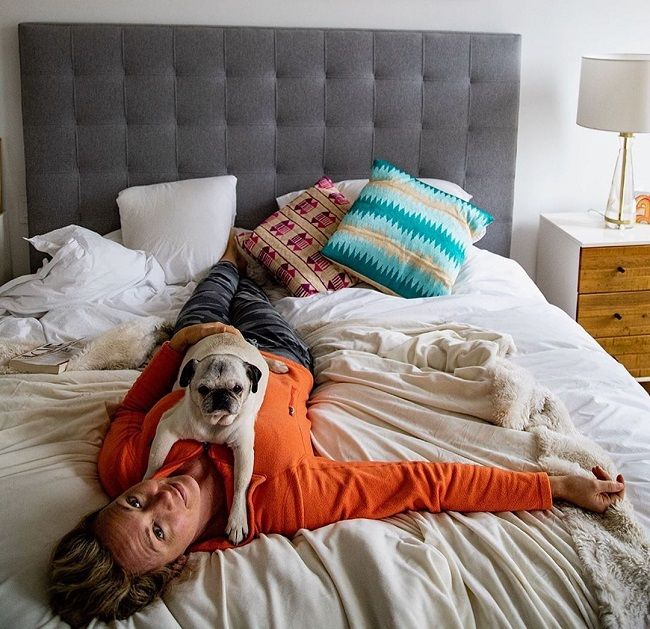 Caption: Brooke Baldwin on her photo captured during her sick days in self-isolation with her pug (Source: Instagram)

How fighting coronavirus taught Brooke Baldwin about the gift of connection

With a pass of time, she started getting sick and lost her ability to do a job. She was too sick to even extend the Instagram series from her bedroom. She was suddenly cut off from her purpose, and even isolated from her husband, left to experience the virus firsthand all by herself. Like so many others.
she began sleeping in separate bedrooms and using separate bathrooms. Her husband did his best to care for her. Slowly, she started losing her taste ability.

On darker days, she didn’t want to talk to anyone. After days of trying to stay physically apart from her husband, it just became impossible. Her husband hated to see me suffer and he couldn’t take care of her. Even he started to hold her in those darker moments and let her cry, whispering: “Everything’s going to be all right.”  These simple acts of connecting with her and hugging her were therapeutic beyond measure. She felt isolation might be worse than the body aches. She endlessly feels grateful that she has a selfless husband who is also lucky enough to have remained well while she was ill.

Today, she truly considers herself one of the lucky ones. Her version of coronavirus did not take suffocating hold of her lungs the way it has with thousands of other patients. She never felt struggled to breathe. Even though her body constantly gave her the middle finger, her lungs did not. And most of all she is grateful for the reminders this virus provided to her. Firstly the clarity comes from being quiet and listening to our feelings and second, the connection is more vital to our health and happiness than we might care to admit.

Brooke Baldwin is 42 years old. She was born on July 12, 1979, in Atlanta, Georgia. Her father’s name is Steven Robert Baldwin and her mother’s name is Christine King Fulton.

Moving toward her educational background, she attended Westminster Schools, a private college-preparatory school. In 2001, she was certified with a bachelor’s degree in Spanish from the University of North Carolina at Chapel Hill. Further, she graduated in journalism from the university’s Hussman School of Journalism and Media. As an undergraduate, she has also studied abroad at the Universidad Iberoamericana in Mexico City. 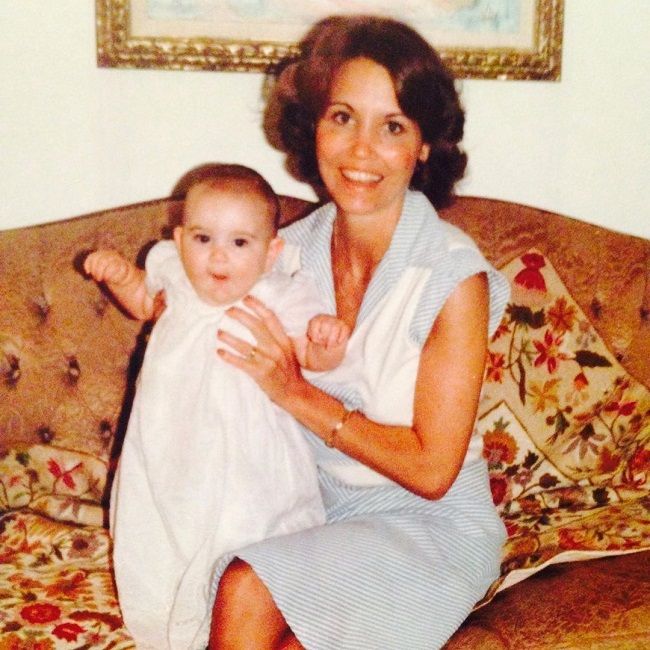 Caption: Brooke Baldwin in her childhood photo clicked with her mother (Source: Instagram)

Talking about Brooke Baldwin’s career, she is a journalist. She started her career in 2001 when she was hired by ‘WVIR-TV,’ an ‘NBC’-affiliated TV station based in Virginia. She becomes the morning anchor for the channel ‘WOWK-TV’ in the Huntington and Charleston areas. Later, she switched to ‘WTTG,’ a ‘Fox’-owned-and-operated news channel licensed in Washington, DC. Similarly, she also worked as the lead reporter for the channel’s 10 pm bulletin and led the coverage of the shooting massacres at both ‘Virginia Tech’ and the ‘West Nickel Mines School.’

Later she joined ‘WOWK-TV’ in the Huntington and Charleston areas, as the channel’s morning anchor, and covered stories such as the ‘Sago Mine collapse and Martha Stewart’s release from federal prison. In 2008, she entered the ‘CNN’ and ‘Headline News networks and contributed to the channel’s award-winning coverage of the 2008 presidential election. Also, in 2009, she executed a report on the discovery of the Mayan City of Mirador.

In 2011, She co-anchored ‘CNN’s exclusive coverage of the final launch of ‘Space Shuttle Atlantis’ (STS-135) from the ‘Kennedy Space Center.’ In the following year, she released her documentary, ‘To Catch a Killer,’ which even won the ‘Silver World Medal’ for the ‘Best Investigative Report’ at the ‘New York Festivals International Television & Film Awards.’

In 2013, she performed the live coverage of the ‘Golden Globe Awards red carpet. Similarly, in the following year, she covered then-President Barack Obama’s second presidential inauguration. In April 2013, she also credited the extensive special coverage of the ‘Boston Marathon bombings. She covered the New York protests after Eric Garner’s chokehold death in 2014 and received an ‘Emmy nomination for the same. 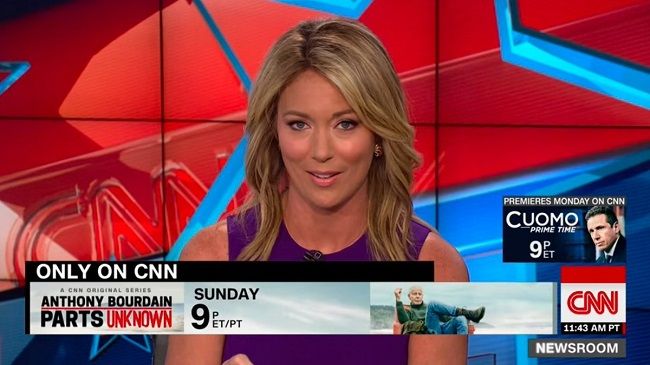 Caption: Brooke Baldwin was captured during her show running on CNN (Source: Coed)

In 2015, she became the ‘Peabody Award finalist for her conference on gun violence in Washington, DC. She also became a member of the ‘Peabody’-winning team that reported the oil-spill disaster in the Gulf, and the collapse of the ‘Upper Big Branch Coal Mine’ in West Virginia. She has reported living from the tornado debris in Moore, Oklahoma. The adventurer journalist has even covered the release of three women who were in captivity for a decade in Cleveland. She covered the presidential inauguration of Donald Trump on January 20, 2017. Moreover, she along with ‘CNN’s Jake Tapper covered the historic government shutdown from ‘Capitol Hill’ in 2018.

Along with hosting ‘CNN Newsroom,’ she has even co-hosted ‘CNN’s annual ‘New Year’s Eve Live.’ In 2018, ‘CNN’ launched her eight-part digital video series, ‘American Woman.’ The series was hosted by her with the highlights lives of some of America’s most famous women from several professional fields. She is also credited for writing articles for the ‘CNN digital portal.

Some of her other publications are ‘Conquering Mount Kilimanjaro: 10 essential lessons’ (2015), and’Brooke Baldwin: I’m reporting on a world at war. He’s fighting in one (2016), ‘4 flights, an aircraft carrier, and a helicopter (2016),  ‘Brooke Baldwin: There’s been a shooting … again’ (2015), and ‘Brooke Baldwin: Speaking like this to women in 2017? No way (2017). In 2017, she appeared in an article titled ‘Women Surge to Top of TV News in Face of Sexism,’ published in ‘Variety’ magazine. Moreover, she dropped her ‘Newsroom’ segment suddenly after sports journalist Clay Travis made a sexist remark while reviewing the Jemele Hill controversy.

Brooke Baldwin hosted the AK100 Club event for the travel agency Abercrombie and Kent and delivered a speech, based on her March 2015 climb up Mount Kilimanjaro. Also in 2016, she presented an award at L’Oréal Paris 11th Annual Women of Worth Celebration.

On May 14, 2017, she gave the commencement address at The University of North Carolina at Chapel Hill.

Speaking on Brooke Baldwin’s earnings, she is a journalist who has earned a decent sum of money through her profession. She is a highly talented, and seasoned American TV news anchor and journalist for her hard work and dedication. Therefore, she achieved a net worth of $1.5 Million.  This CNN reporter receives an annual salary of $59,679.

Reflecting on Brooke’s personal life, she is a married woman. In July 2017, she revealed her engagement with English producer James Fletcher. The duo married on May 5, 2018. They share a very special bonding which is showcased through her essay on her COVID encounters. Currently, she has not given birth to her baby to date. 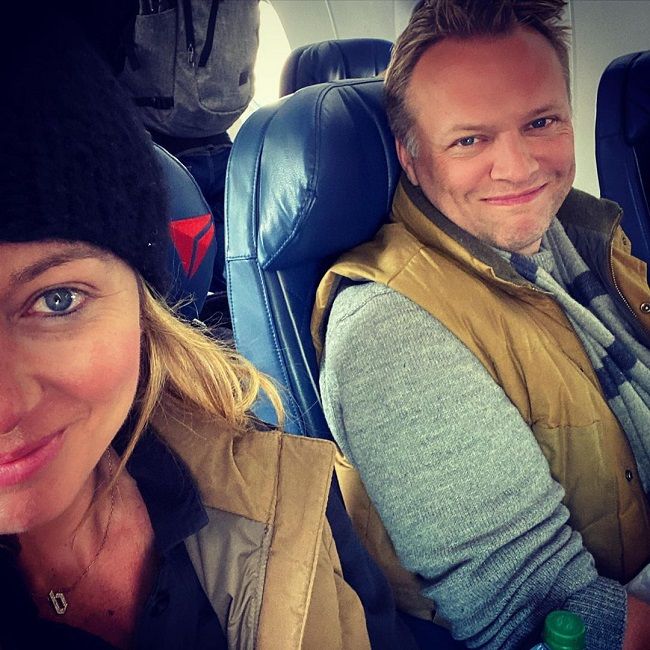 In 2015, During the Baltimore riots, she was subjected to criticism for accusing veterans of being responsible for the quarrel. She even announced that the police officers returning from the war “are coming back from war, they don’t know the communities and they’re ready to do battle.”  She defended herself, saying she had just repeated when criticized for her comments and what she had been told by a city official.

Later she apologized, both on ‘Twitter’ and air, for her misleading statements. Her apology got appreciation and was highlighted as an example of how a senior journalist should behave.

This CNN reporter Brooke Baldwin has a good height of 5 feet 7 inches tall. She looks beautiful and has a bold charming personality. Further, there is no other information regarding her weight, body statics, etc. She has a pair of bright blue eyes with blonde hair color.