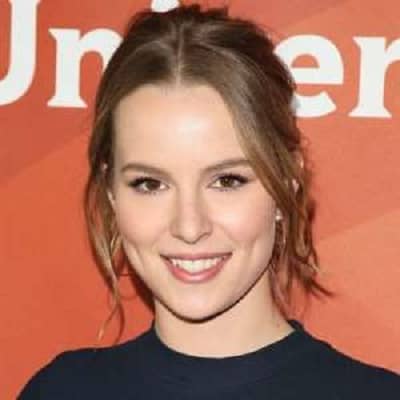 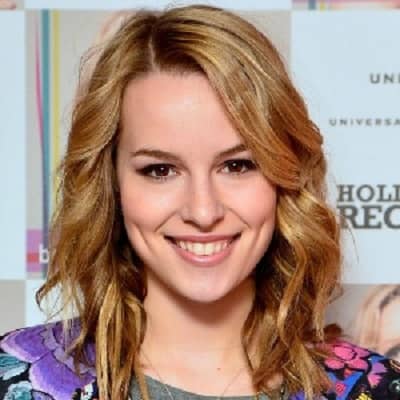 Bridgit Mendler was born on 18 December 1992 (age 28 years old) in Washington DC, United States. Her parents were Sandra Ford Mendle(who has a doctorate in public policy) and Charles Mendler. She has a younger brother named Nick. Mendler is the niece of psychologist Christine Blasey Ford. Her nicknames are Bridge, Bile, Bride, B, and so on.

She moved to the west coast, just outside of San Francisco when she was 8 years old. That is when she expressed her feeling for acting and wanted to become an actress since then. Her Nationality is American. Her zodiac sign is Sagittarius. Acting singing, Travelling, Meeting new people are some of the hobbies which later on became her career option as well. At age of 11, she hires an agent to help her get an acting job. 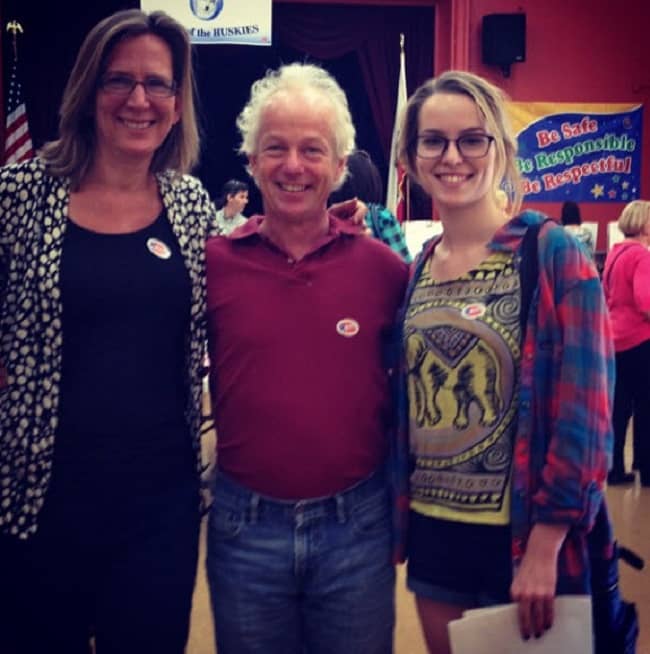 Bridgit Mendler with her parents (Source:Dis411)

Talking about education she was a brilliant child. As per reports she studied at the University Of Southern California (USC) in Los Angeles, California, and got a degree in Anthropology. She decided to join the arts after two of her band member decided to study at USC. In 2012 she joined the Anthropology class and year 2013 she studied Medieval Visual Culture and Medical Anthropology.

Although, in an interview, she stated that she choose this study as her career path is not as formulaic. In the year 2016, she graduated from USC as an anthropologist. She decides to join a doctorate as inspired by her mother; Who is a doctorate in public policy. In the year 2017, she announced to participate in MIT Media lab’s Director fellow, and in 2018 she started her graduate program at Massachusetts Institute of Technology(MIT) intending to improve social media. In the year 2020, she completed her graduate degree at MIT and began preparing Ph.D. with MIT’s center for constructive communications and social machines group.

Bridgit Mendler started her career at a very early age. As acting has always become her passion she made it a career option as well. In 2004 she started her acting career as ‘Lucy’ in an India Animated movie ‘The Legend Of Buddha’. At the age of 13 years, she got the guest role in the soap opera ‘General Hospital’. She portrayed the role of the dream character ‘Lulu Spencer’. Furthermore, she has been a part of different movies. In the year 2007, she played the role of Pamela Jones in the movie ‘Alice Upside Down’. In the year 2008, she landed as ‘Kristen Gregory’ in the movie ‘The Clique’. Similarly, in the year 2009, she appeared in ‘Alvin the Chipmunks  The Squeakquel as ‘BeccaKingston’.

She has done voice role le as ‘AppolinEnglishovie ‘Beverly Hills Chihuahua 2’.Similarly, in the same category is the English dub as ‘Arrietty’ in n ‘The Secret World the Of Arrietty’.In 2014 she was been as ‘Minnie,’ in an extended version of the movie ‘Muppets Most Wanted’.Likewise, in the same year, she portrayed the role in a documentary of herself in ‘Lennon or McCartney’.

Moreover, in the year 2018, she was seen portraying the role of ‘Meredith’ in ‘Fatheaf the Year’ which is originally titled portrayed you think would win?’ She has been a part of television as well.  In 2009 she portrayed the role of ‘penny’ in the episode ‘wrong song’ in the series ‘Jonas. She was part of one of the famous Disney series Wizards of Waverly Place;(from 2009-2012) as Juliet Van Heusen in seasons 2-4 in at least 10 episodes in different times as recurring roles opposite famous stars like Selena Gomez.

Afterward, she has become one of the powerful actresses in her generation. She has also appeared in another Disney Series ‘Good Luck Charlie’(from 2010-2014) as ‘Teddy Duncan’ as the main role. This was one of the career-changing opportunities for her. Likewise, she was seen as ‘Olivia White’ in the Disney Channel original movie ‘Lemonade Mouth’ in 2011. In the same year, she was seen as herself and as a participant in ‘Disney’s Friends for change games’ in episodes and part of the yellow team.

Similarly, she portrayed herself in the series ‘pranksters in episode ‘secret Agent’ and ‘herself’ in ‘Extreme Makeover: Home Edition. Moreover, in 2012 she was seKingstonouse’ as ‘Callie Rogers’ in episode: ‘Runaways’.likewise, in the same year, she played herself in ‘Austin Mahone Takeover’ in ‘episode: Jingle ball with sean Kingston and Enrique  Iglesias’.However, she was seen in Violetta as herself in an episode; A celebrity, a song.

In 2013 she played  Jessie in ‘Teddy Duncan’ in Episode; ‘Good Luck Jessie: NYC Christmas’.Likewise, her career is unstoppable now. Her wonderful acting has grabbed her many projects. From 2015-2016 she wasLet’sn in the series Undateable as Candace as the main role in seasons 2-3. She also portrayed the character o Ashley Willerman’s infamous series Nashville in episode: ‘Let’s Put it Back Together Again’.Which was quite popular as well. Also, she was able to grab the main role of ‘Emmy Quin’ in ‘Merry Happy Whatever’. so her filmy career was full of excitement and the wonderful character she portrayed has always become the center of attraction.

Mendler is also a beautiful singer. Her voice style is mezzo-soprano and she loves to play guitar, keyboard, and keytar. She has recorded two songs for studio albums; One is single and another is collaboration. Her first soundtrack Lemonade Mouth was on number 4 on a billboard on 200. It is a great achievement for a career startup. In addition, her first single album Somebody reach number 89 in US Billboard Hot 100 and sold about 6,000 copies in the first week in the United States.

She has emerged as one of the multitalented person as well as her popularities knew no boundaries. Her second single Determinate reach at 1 in US Billboard Hot 100 and charted in two more countries. She made her first Hollywood debut album Hello My Name Is….. in 2012 which peaked in number 30 on US Billboard 200.

Her single debut album ready or not had become an international hit on number 40 and was certified as gold in Norway, Platinum in New Zealand United States, and Canada and peaked at number 49 on US Billboard 100. As per reports her second album was Hurricane and was released on April 12 2013 which was shot in London. It had been certified as gold in the USA.

Likewise, on 2 July 2201, it was said that she has left Hollywood singing. Her many albums are yet to be announced and her fan is always waiting for her another release. Some of the unreleased songs include Starry Eyes, You are Beautiful, Your Song, Talk to Me, Give Love a Try with nick and joe jones. She had her inspiration from Beyonce Ellie Goulding Taylor Swift, Katy Perry, Adele, and many more. 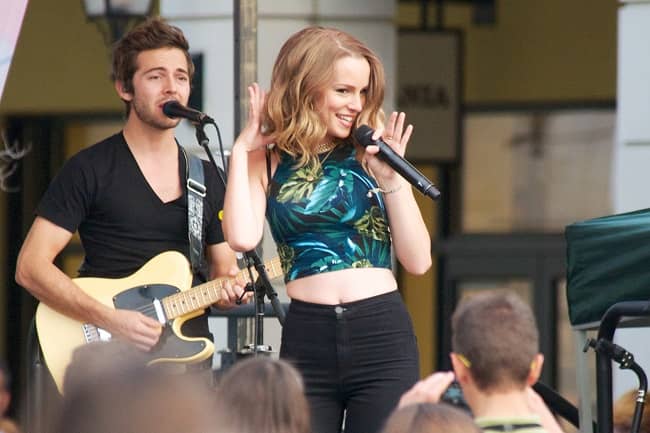 Bridgit Mendler with her co-singer(Source: wikimedia.org)

She is a great social activist as well. Her kind nature and warm personality are very enduring. In the year 2010, Mendler became ambassador to First Book, which is a campaign that provides emphasis to the people who are needy and want to study.in 2011, she became part of Disney’s friends to change a pro-social ‘green’ initiative to raise awareness among people about the environmental burning issues.

On that note, she also released a promotional song ‘We can change the world’ raising $250,000 for Disney’s worldwide conservative fund. She participated in the Disney channel Olympic-based game as a yellow team and got a donation of $12,000 donation to UNICEF. Likewise, she is a social activist as well. She raises a strong voice against bullying feminism, Women empowerment as well. Likewise, her neverending work the society has been a great boost up to the people and herself.

She has achieved so much as a person that the awards and nominations are just a small package for her. Her recognition is worldwide. She won Common Sense Media as Role Model in the year 2012. Likewise, She got a nomination with Do Something Awards for Celebs Gone Good in the year 2014. Moreover, She was nominated with Kids Choice Awards in Favourite TV Actress for her work in Good Luck Charlie. Likewise, she got the nomination for MTV Europe Music Awards for the category of Artist on the Rise in the year 2013.

Similarly, she won Radio Disney Music Awards for Ready or Not in the category Best Acoustic Performance and get nominated in the Best Music Video category in the same year. Moreover, she get nominated with Short awards for Herself as Best Singer, Ready or not as Best Song, and Good Luck Charlie as Best Actress in the year 2013.

She got nominated for her performance in Wizards of Waverly Place as Young Artist Awards in the category Best Performance in TV series/ Recurring young actress 17-21. Furthermore, she got nominated for World Music Awards in the years 2014 and 2015 for her music album Hersel and Ready or Not. She is an inspiration to everyone out their and hope she has more bright future ahead.

The multitalented young actress is one of the leading ladies of Hollywood. Her net worth is around 2 million dollars. Moreover,  her income has emerged from movies her albums and other different works.

As per the relationship status, the Disney actress has happily married Griffin Cleverly. The duo had their engagement in April 2019  and after 6 months they decided to marry each other. Their marriage took place in October 2019 as they are happily together. talking about her past relationships Bridgit Mendler was in a relationship with her co-star from the movie Good Luck Charlie(2010) Shane Harper. They met on the set of a movie and began dating. They dated for almost  4 years. 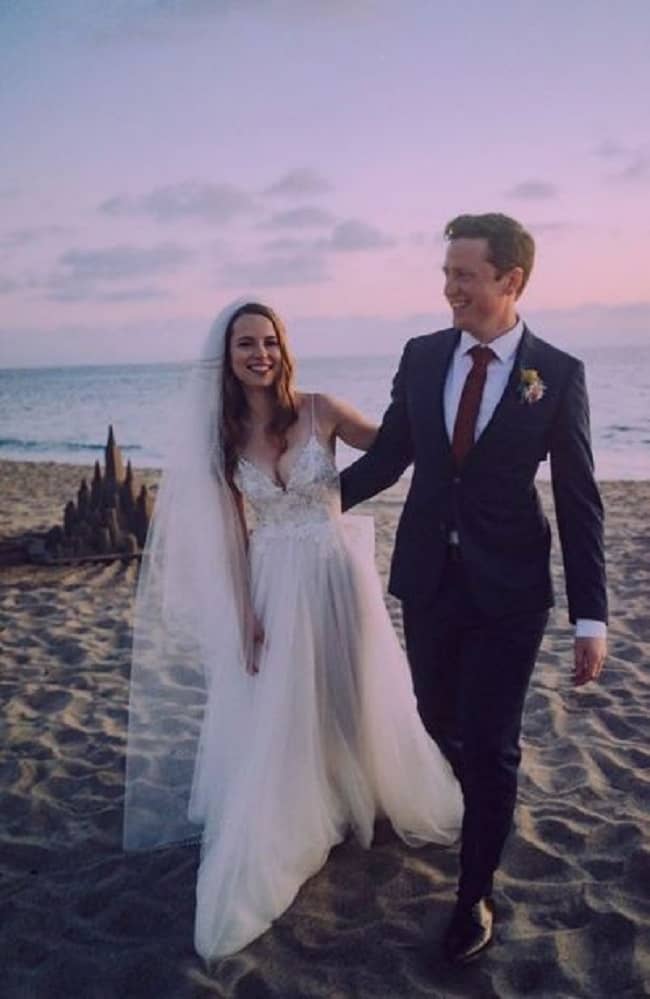 The beautiful Disney star has a charming body that would die for. Bridgit Mendler is a blonde with dazzling light brown eyes. She is about 5  feet 7 inches tall and is about 5 kg. Her bra size is 32C and her shoe size is 7(us) and her body measurement includes 34-25-35 inches. She has banana shape body with a cute dimple smile which adds more beauty to her soul and personality.

Her incredible work in cinema has increased her viewers in the best possible ways. Her works and her performance always fascinated her fans. She has huge followers on social media as well. She has around 4.2 million followers on Twitter, around 1.97 million subscribers on youtube, and 1.6 Million followers on Instagram.