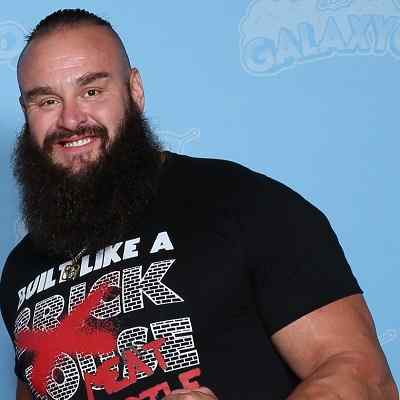 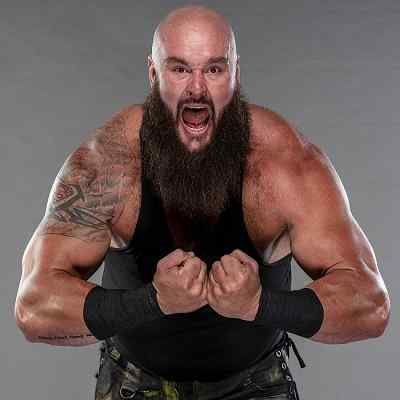 Braun Strowman is a Professional American wrestler and strongman. Braun Strowman signed with WWE in May of 2013. Likewise, he joined the wrestling group known as The Wyatt Family in August of 2014.

Braun Strowman was born on September 6, 1983, in Sherrills Ford, North Carolina, USA. He is 38 years old and is under the zodiac sign, Virgo. He holds an American nationality. Likewise, his real name is Adam Joseph Scherr.

His father’s name is Rick Scherr but his mother is not available until now. He also has a younger sister and her name is Hannah. Likewise, his father is widely regarded as one of the greatest slow-pitch softball players of all time and is a USSSA Hall of Fame member. He still holds the All-Time World Series records in home runs (101), hits (166), and RBIs (202). Other than this, nothing much about his other family members is available to date. It seems as if he likes to keep his personal and family life private and away from the limelight and the public eye.

Regarding his educational background and qualification, he studied at Bandys High School. He was good in various sports, such as football, track, and wrestling. He graduated in the year 2001 and then enrolled in a community college. And, for the next four years, he played semi-professional football for the Hickory Hornets. Moreover, he even worked as a doorman and a mechanic. Strowman was not able to turn a professional, even though he attended the NFL Scouting Combine in the year 2007.

Braun Strowman started his career as a strongman in the late 2000s. He earned his Strongman Corporation (ASC) Professional Card in the year 2011 after he emerged victorious at the NAS US Amateur National Championship. He even won the Arnold Amateur Strongman Championship, which was held the next year. Likewise, this victory earned him an invitation to the 2013 Arnold Strongman Classic. Strowman also took part in the SCL North American Championships, where he finished in 5th place. Moreover, he competed at the Giants Live Poland event as well, where he finished in 7th place.

He signed a contract with WWE in early 2013. He was assigned to the WWE Performance Center in Florida. Likewise, He then soon adopted the ring name Braun Strowman and made his professional debut in December 2014 in a match against Chad Gable, in which he defeated the latter. And, the year after that, he fought against an unidentified wrestler at a “Main Event” taping in a dark match. He won the match. Then, in August 2015, he made his roster debut in a match against Dean Ambrose and Roman Reigns. He was able to establish himself as a member of the Wyatt Family.

Moreover, his first televised singles match took place August 31 episode of Raw. He defeated Ambrose by disqualification in this episode. Then, in September, he took part in his first pay-per-event match at Night of Champions, where Ambrose, along with Reigns and Chris Jericho, was again beaten by the Wyatt Family in a six-man tag team match. Likewise, he also took part in the Royal Rumble in January 2016, where he managed to eliminate five opponents. But was eventually eliminated himself by Brock Lesnar.

He was drafted to the Raw brand as a part of the 2016 WWE draft. This separated him from Bray Wyatt and Erick Rowan. It even led to the start of his singles career. Likewise, in the following weeks, he defeated several local wrestlers quite easily. Moreover, after competing against several other wrestlers, he was going to fight Zayn, but the match never happened as they attacked each other even before the fight started.

Furthermore, Strowman even faced Zayn again for a spot on the Team Raw, in the Survivor Series five-on-five elimination match, where he eliminated the latter. However, during the actual event, he became the first man to be eliminated. Then, a match between Strowman and Zayn was announced on the 13th December episode of Raw. He then was given ten minutes to defeat Zayn, which he was unable to do. Eventually, he did defeat Zayn in a Last Man Standing match on the 2nd January 2017 episode of Raw. 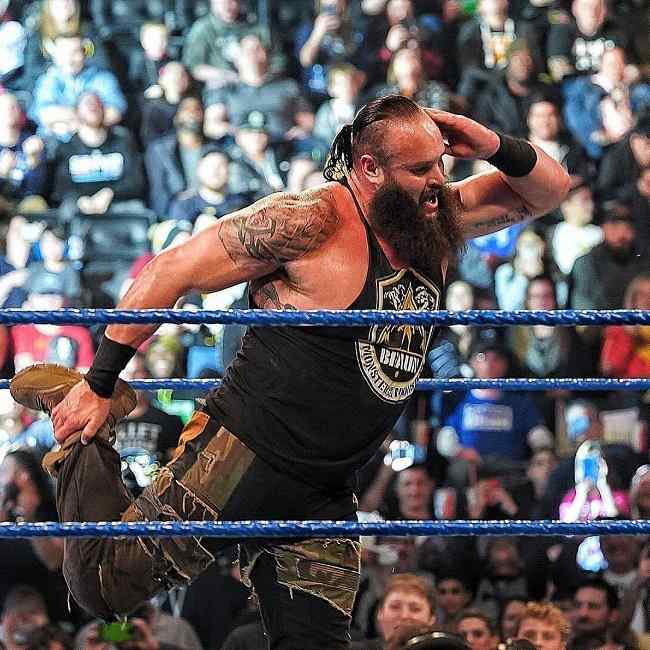 In early 2017, he started his pursuit of the Universal Championship. And, along with Reigns and Samoa Joe, he even challenged the champion Brock Lesnar in a Fatal 4-way match. However, he couldn’t beat Lesnar who retained his title. Likewise, despite several attempts, he was still unable to win the title. He also got a chance to earn the title again in a seven-man # 1 contender at the Elimination Chamber.

At Wrestlemania 34, Strowman got a chance to try for the Raw Tag Team Championship as long as he found a tag team partner. He then chose a young fan named Nicholas from the audience to be his tag partner and defeated Cesaro and Sheamus. This helped Nicholas become the youngest champion of any kind in the history of WWE. Then, in April 2018, he took part in the Greatest Royal Rumble, where he won the championship after 13 eliminations.

Braun Strowman is in a romantic relationship with Kamilla Kaine. Kamilla is an independent pro wrestler. The couple started dating each other over a year ago. However, many WWE fans don’t know that he has a girlfriend in real life. It seems as if Strowman has mostly kept her personal and love life private and away from the public. That might be the reason why most people don’t really know about his relationship. Likewise, talking about his past relationships, he dated Raw Women’s Champion, Alexa Bliss. 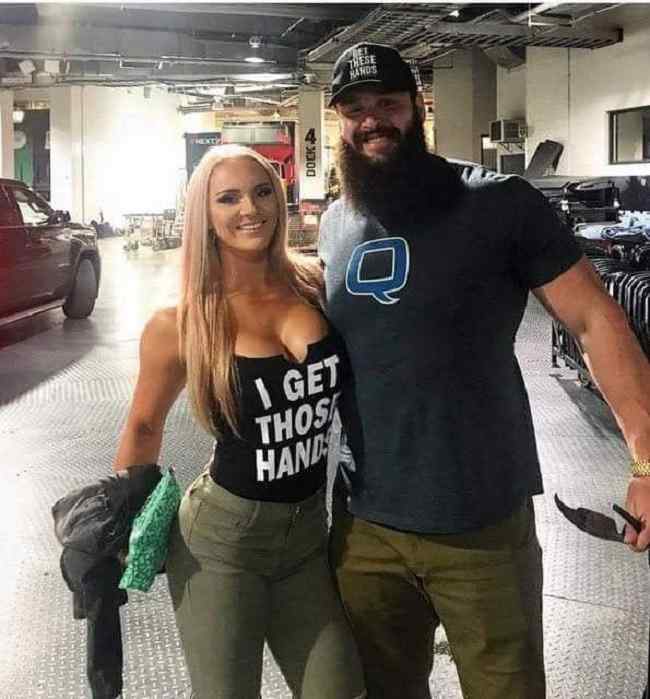 Braun Strowman has a height of 6 feet 8 inches and his weight is 175 Kg. And his other body measurements such as his chest size, waist size, and bicep size, are 62-42-24 inches respectively. Moreover, he has brown hair and brown eyes. He has a very physique body. He also has a beard and mustache as well. 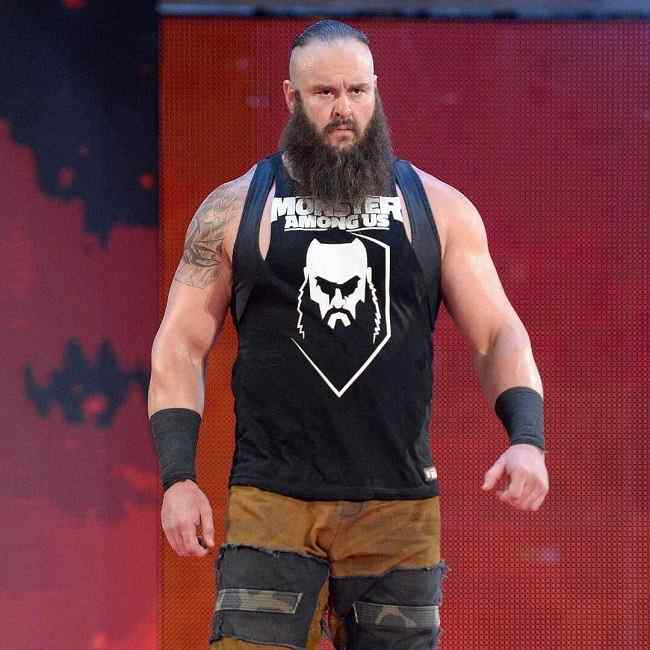 Talking about his earnings and income, he has a $1 million net worth and his main income source is his wrestling career.