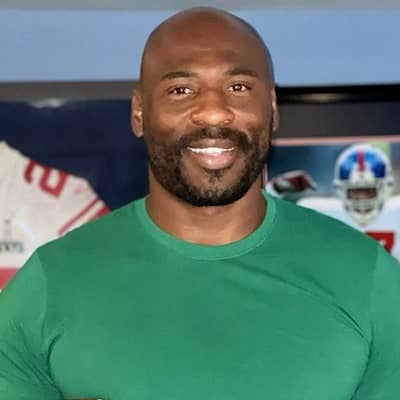 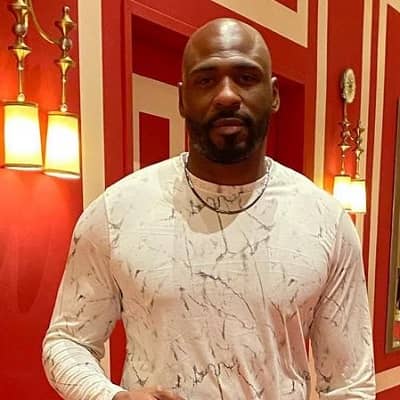 Brandon Jacobs is a retired NFL running back a player from the United States. Moreover, Brandon Jacobs spent the majority of his career with the New York Giants.

Brandon Christopher Jacobs best known as Brandon Jacobs was born on the 6th of July 1982, in Napoleonville, Louisiana, the United States of America. According to his birth date, he is 40 years old and holds an American nationality. 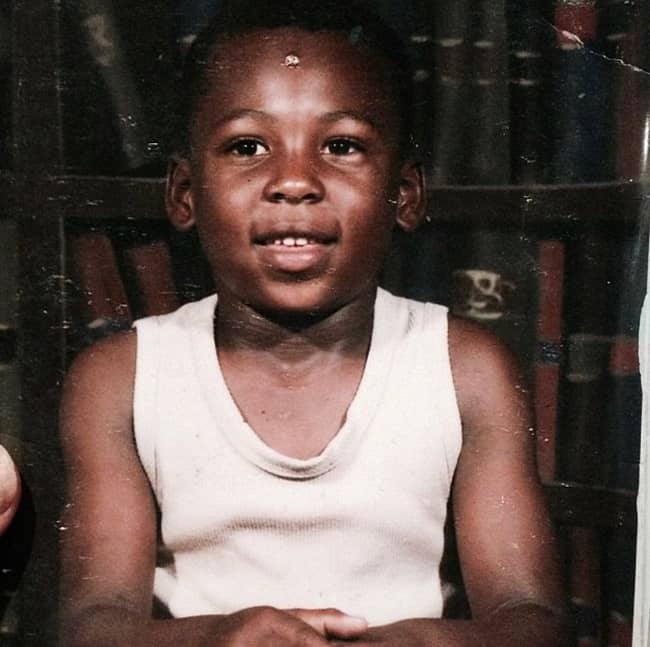 Moreover, he has a birth sign of Cancer and he believes in Christianity. This man has not disclosed information regarding his parents. However, he was raised by his mother, Janice Jacob along with his sibling whose name is Michael Jacobs.

Talking about his educational career, he studied at Assumption High School where he played basketball and football. During his senior years, he earned awards such as USA Today All-America, Orlando Sentinel All-Southern, Prep Star All-Region, and Louisiana Class 4A Most Valuable Offensive Player. During his final year, he ran for more than 3,000 yards and scored 38 touchdowns.

In addition, he was also recognized as CCC’s team MVP. He gathered 1,896 yards and 20 touchdowns on 267 carry for the Red Ravens in his sophomore season, averaging 7.1 yards per carrying. Jacobs was selected to the KJCCC All-Conference First Team and was awarded a JUCO All-American as a result of his accomplishments.

Furthermore, he attended Auburn University alongside first-round draft choices Carnell Williams, Ronnie Brown, and Jason Campbell. He was the backup running back to Carnell and Ronnie. Brandon rushed for 446 yards and two touchdowns for the Tigers in 2003.

He transferred to then-Division 1-AA Southern Illinois after the 2003 college football season. Further, he had another excellent year at Southern Illinois. He led the team with 150 carries for 992 yards (6.6 average) and 19 touchdowns. In addition, he was selected All-American first-team by The NFL Draft Report, All-Gateway Conference first-team, and Gateway Conference Newcomer of the Year.

He topped the league in scoring and was rated ninth in the country, averaging 9.5 points per game. He had eight catches for 83 yards (10.4 average), six kickoff returns for 140 yards (23.3 average), and five 100-yard running performances, including playoffs.

Talking about his professional career, he was graded the 11th best running back available in the 2005 NFL Draft by Sports Illustrated. He was expected to be taken early in the fourth round, and that is exactly what happened (110th overall).

He admits watching the footage of renowned power running back Eddie George before the 2006 season to improve his running technique. Eddie was a big, strong running back like him. Brandon ran the ball 96 times for 423 yards and nine touchdowns during the 2006 season, averaging 4.4 yards per carrying.

To that, he added 11 catches for 149 yards. In the 2007 season, he replaced Tiki Barber as the Giants’ starting running back when Tiki announced his retirement. He suffered a knee injury in the opening game vs the Dallas Cowboys, but four weeks later, he was able to play against the New York Jets and carry for 100 yards and a score.

Despite missing two more games due to a hamstring injury later in the season, he finished the regular season with 1,009 yards and four touchdowns on 201 touches. A further 23 catches for 174 yards and two scores were added by him. In the NFC Divisional Playoffs matchup with the Dallas Cowboys, he scored the game-winning touchdown. As the Giants won the Super Bowl XLII, Jacobs started each game throughout the postseason.

He had wrist surgery in the offseason of 2008. His knee continued to trouble him during the regular season, but he came back to play the whole preseason. He had 219 carries for 1089 yards and 15 touchdowns at the end of the regular season in 2008—the same number of carries as in 2007, but with much more scores.

He and Derrick Ward joined the other four teammates who had rushed for 1,000 yards in a single season in 2008. The Giants gave him the franchise tag on February 13, 2009.

A week later, he agreed to a four-year, $25 million contract with the Giants, and that year, he carried the most of the load. Due to a knee injury, he was put on injured reserve on December 31, 2009. He received a $10,000 fine after throwing his helmet into the Lucas Oil Stadium stands on September 19, 2010.

In addition, he was announced as the Giants’ top running back for their game against the Jacksonville Jaguars on November 24, 2010. He and the Giants took the field in Super Bowl XLVI at the end of the 2011 season. The Giants defeated the New England Patriots 21-17 due to his nine carries for 37 yards.

On March 28, 2012, he signed a contract with the San Francisco 49ers. After suffering a knee injury in training camp, he missed the first two months of the season and had little playing time after his comeback. He played in two games and carried the ball five times for a total of seven yards, essentially serving as the third or fourth backup tailback.

Following many posts by him on social media platforms criticizing his lack of playing time, including one in which he said he was “on this team rotting away,” the 49ers banned him for the last three games of the same season. On December 31, 2012, the 49ers released him. 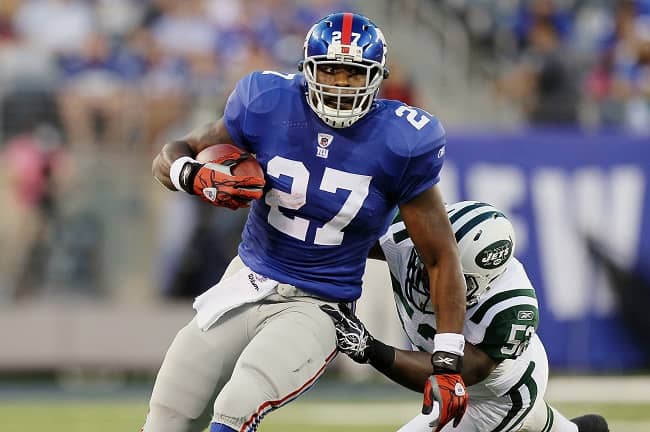 He made an appearance on episode #406 of ABC’s Shark Tank on October 19, 2012, together with Pro NRG creator Tania Patruno, to present the startup company’s protein supplement/energy drink and maybe secure some funding for the endeavor.

Additionally, during February 16, 2012, broadcast of Impact Wrestling, he made an appearance. In the episode, he drove wrestler Bully Ray through a table.

On September 10, 2013, he agreed to a one-year contract with the New York Giants. Overall he participated in seven games, running for 238 yards on 58 attempts for an average of 4.1 yards and four touchdowns. He announced his retirement after nine seasons on January 2, 2014.

In his NFL career, he has earned two Super Bowl champion (XLII, XLVI). In his NFL, he has helped his franchise with many victories.

As a former NFL player, he has a net worth of $8 million as of 2022 and he has not yet revealed his salary and income in public.

He married his girlfriend, Kim Jacobs in July of 2005 after dating shortly. Moreover, the couple has a son named Brayden. In addition, the couple first met each other at Auburn University. Kim has a Masters in early child development.

He stands 6 feet 4 inches tall and weighs around 122 kg. Moreover, Brandon is blad with brown eyes color and there are no other details regarding his other body stats. 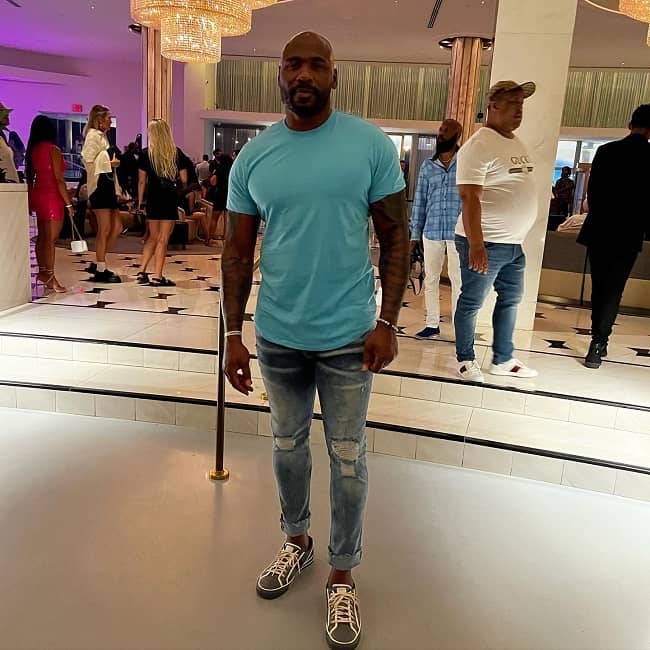