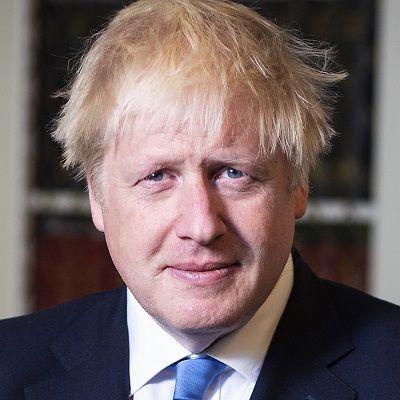 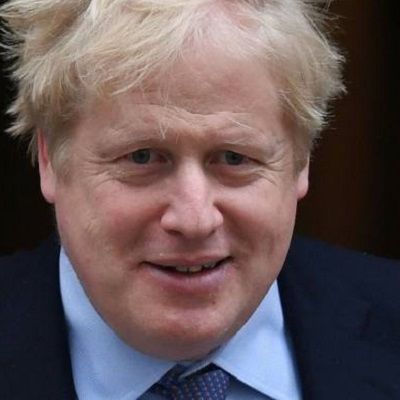 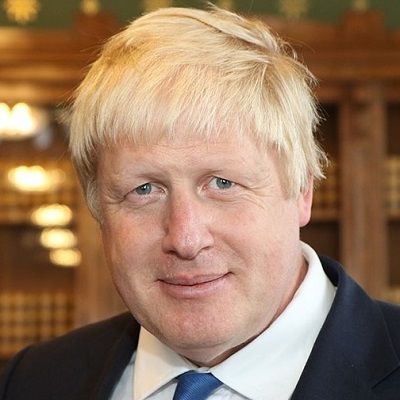 Boris Johnson is the present British Prime Minister since 2019. Boris Johnson is also a journalist, author, and politician. He is also the Leader of the Conservative Party since the year 2019. During the global pandemic of COVID-19 in 2020, Boris also experienced first hand the effects of the virus as he also needed to be admitted to ICU for further treatment!

Boris Johnson was born on 19 June 1964 and he is currently 55 years old. His full name is Alexander Boris de Pfeffel Johnson and he was born in Upper East Side of Manhattan, New York, United States. When he was born, his father was 23 years old and her mother was only 22 years old.

Likewise, his mother is Charlotte Fawcett, and his father is Stanley Johnson. Stanley was an Englishman who was studying economics at Columbia University. And his mother is an Oxford-born artist from a family of liberal intellectuals, and a daughter of Sir James Fawcett, a barrister.

Talking about his siblings, Boris has three of them. They are sister Rachel Johnson and brothers Jo Johnson and Leo Fenton Johnson. Leo is also a politician and he is a former Member of Parliament of the United Kingdom. Likewise, Rachel is a British journalist, television presenter, and author. She has also appeared on political discussion panels including Question Time and The Pledge. 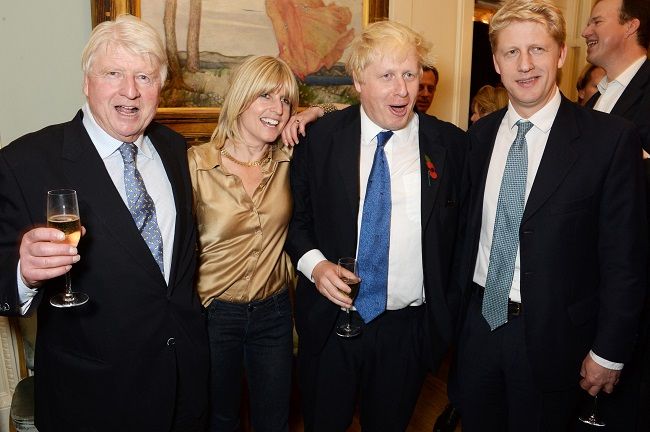 Caption: Boris Johnson photographed with his family members in an event. Source: The Irish Sun

Boris attended numerous schools due to frequent changes in the settlement of his family. He attended Winsford Village School in Nethercote. After that, the siblings were educated at Primrose Hill Primary School. Then Boris went to the European School, Brussels I in Uccle, Brussels. Here, Boris Johnson learned to speak French.

Moreover, Boris attended Ashdown House which is a preparatory boarding school in East Sussex. In this school, he developed a love of rugby and also excelled in Ancient Greek and Latin.

Later in life, Boris Johnson received a King’s Scholarship to study at Eton College. Eton is an elite independent boarding school near Windsor in Berkshire. There, Boris Johnson excelled in English and Classics. He also won prizes in both these subjects and also became the secretary of the school debating society. Alongside, Boris also became the editor of the school newspaper called The Eton College Chronicle.

Further, Boris won a scholarship to read Literae Humaniores at Balliol College, Oxford. It is a four-year course in Classics, ancient literature, and classical philosophy. He graduated from this college in late 1983. Moreover, when he was still in the university, Boris played rugby for Balliol and he also associated himself primarily with Old Etonians.

Professionally, Boris Johnson is a politician, author, and former journalist. He has served as the Prime Minister of the United Kingdom and Leader of the Conservative Party since the year 2019. Boris was the Foreign Secretary from the years 2016 to 2018. He was also the Mayor of London from the years 2008 to 2016.

Further, Boris Johnson was a Member of Parliament (MP) for Henley from the years 2001 to 2008 and he has also been MP for Uxbridge and South Ruislip since the years 2015. Ideologically, Boris identifies as a one-nation conservative.

After graduating, Boris began his career in journalism at The Times newspaper. From there, he was dismissed for falsifying a quotation. Later Boris became the Brussels correspondent for The Daily Telegraph newspaper. Here, his articles employed a strong influence on growing Eurosceptic sentiment on the British right. Later, he was promoted to an assistant editor from the years 1994 to 1999. He also worked for The Spectator magazine as an editor from 1999 to 2005.

After being elected MP for Henley in 2001, Boris served as a junior Shadow Minister under Conservative leaders Michael Howard and David Cameron. He largely stuck to the Conservatives’ party line. However, he adopted a socially liberal stance on issues such as LGBT rights in parliamentary votes.

In the year 2008, Boris was elected Mayor of London. He then resigned a month later from the House of Commons and was re-elected as Mayor in 2012. During his time as a Mayor, Boris oversaw the 2012 Summer Olympics, introduced the New Routemaster buses, a cycle hire scheme, and the Emirates Air Line cable car crossing the Thames. He also banned alcohol consumption on much of London’s public transport.

Then in the year 2015, Boris Johnson was elected MP for Uxbridge and South Ruislip. He then stepped down as mayor the following year. During this time, Boris became a prominent figure in the successful Vote Leave campaign for Brexit in the 2016 EU membership referendum.

Later on, Boris served as Secretary of State for Foreign and Commonwealth Affairs. This was during the earlier stages of Theresa May’s premiership. However, he resigned from the post two years later. It was due to the criticism of May’s approach to Brexit and the Chequers Agreement.

Journey as the Prime Minister

After Theresa May resigned in the year 2019, Boris got elected as the Conservative leader and he was appointed the prime minister of the country. The September 2019 prorogation of Parliament was ruled unlawful by the Supreme Court. Then in the 2019 general election, he led the Conservative Party to its biggest victory since 1987. It was also with the biggest percentage vote share of any party since 1979. During his time as the Prime Minister, the United Kingdom withdrew from the European Union under the terms of a revised Brexit withdrawal agreement.

Likewise, talking about his public image, Boris has been a controversial figure in British journalism and politics. His supporters praise him as an entertaining, humorous, and popular figure. It is with an appeal stretching beyond traditional Conservative voters and Eurosceptics. However, on the contrary, his critics accuse him of dishonesty, elitism, and cronyism. They also accuse him of using offensive language. Boris Johnson is also the subject of several biographies and fictionalized portrayals. 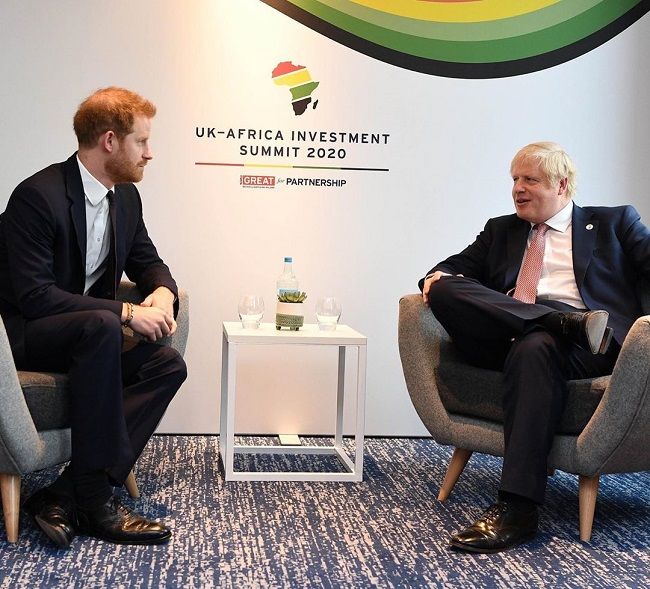 Caption: Boris Johnson hosted the UK-Africa Investment Summit, calling for the UK to be the investment partner of choice for African countries in January 2020. Source: Instagram

Boris Johnson married Allegra Mostyn-Owen in the year 1987. However, their marriage was nullified in 1993. Then after 12 days, he went on to marry Marina Wheeler. She is a barrister and the daughter of journalist and broadcaster Charles Wheeler and Dip Singh.

The couple’s families have known each other for decades. Moreover, Marina Wheeler was at the European School, Brussels, at the same time as Boris. The couple has four children altogether. Five weeks after marriage, Marina gave birth to Boris Johnson’s first child.

Between the years 2000 and 2004, Boris Johnson had an affair with Spectator columnist, Petronella Wyatt. It was when he was its editor. This affair resulted in two terminated pregnancies. Later in April 2006, the News of the World claimed that he had an affair with Guardian journalist, Anna Fazackerley. Though the pair did not comment immediately, Boris employed Anna shortly afterward.

Then in 2009, he fathered a daughter with Helen MacIntyre. Helen is an Arts consultant. Further, in 2013, the Court of Appeal discharged an injunction banning reporting of his daughter’s existence. The judge ruled that the public had a right to know about his reckless behavior. Boris has not disclosed how many children he has.

Later in September 2018, the wedded couple, Boris and Marina shared the news confirming that after 25 years of marriage they had separated several months ago. The former couple had a financial settlement in February 2020 and on 6 May 2020, the reports said that they were granted the divorce.

Moreover, in 2019, Boris was living with Carrie Symonds. Carrie is the daughter of Matthew Symonds and Josephine McAfee, a lawyer. She worked for the Conservative party since 2009 and she also worked on Boris’s 2012 campaign for Mayoral re-election.

Then on 29 February 2020, the lovers announced their engagement and they also shared that they were expecting a baby in early summer. They had their engagement in late 2019 and their son named Wilfred Lawrie Nicholas Johnson was born in London in the early morning of 29 April 2020.

The COVID-19 pandemic emerged as a serious crisis within the first few months of Boris Johnson gaining the 2019 majority. On 20 March, he requested the closure of pubs, restaurants, gyms, entertainment venues, museums and galleries that evening. He said with some regret, “We’re taking away the ancient, inalienable right of free-born people of the United Kingdom to go to the pub.”

Then on 23 March, the closure of public places followed with “stay at home” order throughout the UK. This order was applicable except for a few limited purposes backed up by new legal powers for a period of up to 2 years. The UK was among the last major European states to progressively encourage social distancing, close schools, ban public events, and order a lockdown.

Likewise, on 27 March, as per reports, Boris Johnson himself tested positive for COVID-19. Then on 5 April, he admitted to St Thomas’ Hospital in London for tests after his symptoms became persistent. The next day, Boris’s condition worsened and hence he was moved to the hospital’s intensive care unit (ICU). Dominic Raab was appointed to fill in for him.

He left intensive care on 9 April and left the hospital three days later to recuperate at Chequers. After a fortnight there, Boris returned to Downing Street on the evening of 26 April. He was chairing a government coronavirus “war cabinet” meeting. 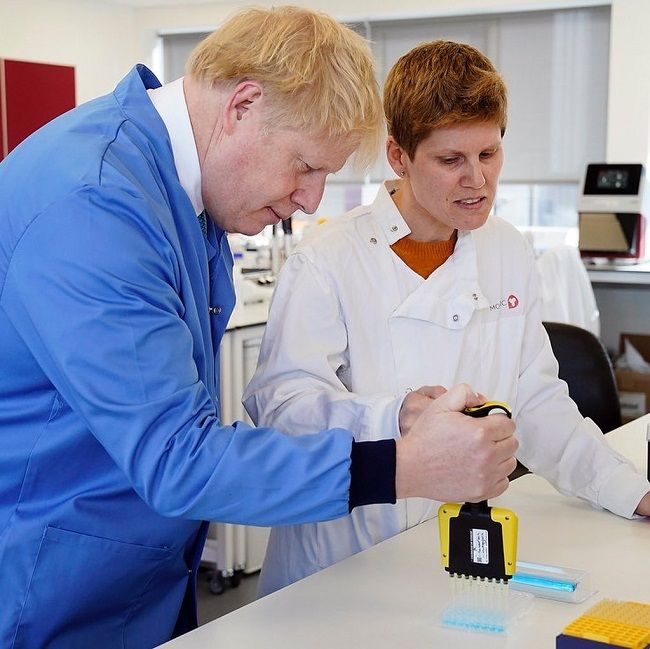 On Thursday, 28 May 2020, Boris Johnson outlined additional measures to relax England’s coronavirus lockdown. He made the announcement amid piling pressure to fire his closest aide over an apparent breach of the restrictions. He said in the government’s latest daily briefing:

“From June 1, primary schools will be able to reopen to more children, Secondary schools are set to begin some face-to-face contact time from June 15. Outdoor markets and car dealerships will be allowed to reopen from June, with more non-essential shops to follow on June 15.”

Boris also unveiled plans to allow more people to meet with family and friends outdoors. People in England could previously meet with only one other person from a separate household but they needed to maintain a six feet apart distance. However, from Monday onwards, six people can meet up. Johnson added:

“Those people will also now be allowed to meet in private backyards in addition to parks but are not permitted to be inside another person’s home “unless it is to access the garden.”