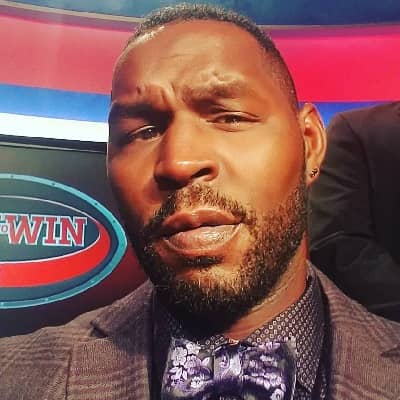 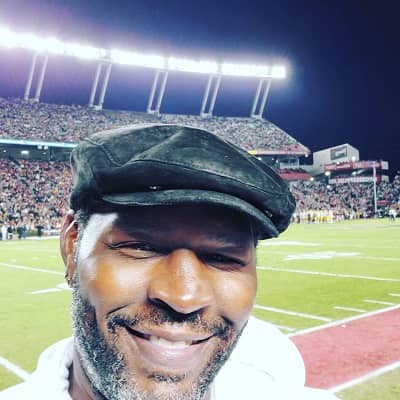 Bob Whitfield is a former American football offensive tackle in the National Football League. Bob Whitfield is the founder and C.E.O. of Patchwerks, Inc., which operated PatchWerk Recording Studios in Atlanta, GA. He also serves as a guest analyst for the UK’s NFL Coverage on Sky Sports as well as contributing to local Atlanta television and radio.

Bob Whitfield was born on October 18, 1971, in Carson, California. He is an American by nationality. Likewise, he is 49 years old and his horoscope is Libra. Whitfield played high school football at Banning High School in Wilmington, California, where he was teammates with Mark Tucker. He then played college football at Stanford University, where Dennis Green served as head coach. Whitfield won a starting position as a true freshman and following his junior season, he declared his eligibility in the NFL Draft. Caption: Bob Whitfield when he was young (Source: Instagram)

Bob Whitfield was in the first round (eighth overall) of the 1992 NFL Draft by the Atlanta Falcons. He was in the game for the Falcons from 1992–2003. He then played for the Jacksonville Jaguars for the 2004 season. Whitfield started for the New York Giants at left tackle during the 2006 season filling in after starter Luke Petitgout went down with an injury. His time as a starter was marked by two episodes of him losing his cool and drawing costly personal fouls, twice on headbutts in key spots against the Dallas Cowboys, and later in a Week 16 loss against the New Orleans Saints.

These actions lead to him receiving the nickname “Head-butt Bob” from many Giant fans as well as local columnists. Due to these actions and general inconsistent play, Whitfield was benched for the final game of the season against the Washington Redskins and the subsequent playoff game against the Philadelphia Eagles. On February 12, 2007, he announced his retirement on Sirius NFL radio. Whitfield is the founder and C.E.O. of Patchwerks, Inc., established in 1993, which operated PatchWerk Recording Studios in Atlanta, GA.

Offering recording, production, mixing, and mastering services, the studio has recorded and/or mixed more than 500 gold and platinum albums, including portions of OutKast’s ATLiens, and Goodie Mob’s Still Standing. The studio has also worked with the likes of T.I., Nelly, 50 Cent, Snoop Dogg, Missy Elliott, Beyoncé, 112, Busta Rhymes, TLC, Whitney Houston, Ras Kass, Toni Braxton, Sting, Cher, Madonna, Annie Lennox, and many more. The studio was divested from the parent company in 2009 in order to focus on investment in film and television.

Whitfield also serves as a guest analyst for the UK’s NFL Coverage on Sky Sports as well as contributing to local Atlanta television and radio. On November 11, 2011, Whitfield was inducted into Stanford University’s Hall of Fame and in an interview. Whitfield admitted he was considering a return to his alma mater to complete his degree. Whitfield returned to Stanford in 2012 and received a degree in economics during a commencement ceremony held on Father’s Day with his kids present. Caption: Bob Whitfield at a show with his colleagues (Source: Instagram)

Whitfield was the wife of The Real Housewives of Atlanta cast member Sheree Whitfield. Bob was a football player for the Atlanta Falcons from 1992 to 2003, but we meet a couple of years after he has stopped playing pro ball. Sheree alleged that during their marriage he was abusive. They have two children, Kaleigh and Kairo, who were born in 1996 and 1999. He pays Sheree child support for both children but was not forced to pay alimony by the courts. Because of her lack of formal education and no skilled trade or profession, she appealed the decision of no alimony but lost the case, as well as her home they shared together.

The last time Sheree Whitfield was on The Real Housewives of Atlanta, she was dating Tyrone Gilliams. Their relationship was a long-distance one as Tyrone was in federal prison serving a 10- year sentence. When the RHOA album appeared on Watch What Happens Live with Andy Cohen: @ Home on Sunday (May 10), she offered an update on that friendship. Andy also wanted to know how things currently are with her ex-husband and dad to two of her kids, Bob Whitfield. The pair divorced in 2007 and later opened up about their difficult past during Season 9 of RHOA. The March 19 episode of Real Housewives of Atlanta was chockful of the show’s usual shady shenanigans. But the episode was also the final nail in the coffin for the relationship between castmate Sheree Whitfield and her ex-husband. Bob Whitfield, who has spent much of season 9 trying to rebuild their relationship after a messy and painful divorce years ago. The couple had an emotional sit-down during the cast trip to Maui. There Sheree accused him of never really acknowledging the struggles that he put her through after the divorce.

“I feel like me being able to talk about it and release it, it’s going to do something for me,” she said during her confessional. “But as far as he and I, it’s over”. The saga that is Bob and Sheree Whitfield’s past has been a storyline since the very first season of the popular franchise in 2008. By the time the first episode aired the divorce proceedings surrounding their seven-year marriage as coming to an end. “We started out really good friends then things changed”, she said during the first-ever episode of the hit reality show.

Much of the drama between the exes that played out on the show was based on accusations. He was refusing to pay child support for the couple’s two children Kairo and Kaleigh. Sheree was often accused of marrying him for his money. From throwing drinks to court appearances, the duo endured their emotional turmoil on camera. By the taping of the most recent season, Sheree says they had developed a friendship. By this point, she had left and made her comeback on the popular show. The couple had already learned to be cordial for the sake of their children.

The show’s recent episodes have revealed that abuse was also a big factor in their marriage. During the getaway to Maui, Sheree awkwardly confronts him about being physically abusive to her and choking her. He clumsily denied her claims and went on to make crass jokes about the ordeal. Which was heartbreaking to fans. This car scene was the catalyst that forced Sheree to decide that a new relationship with her ex would never work.

Talking about his presence on social media platforms, he is quite active there. He is active on Instagram only. In other words, he does not use Twitter nor Facebook. On Instagram, he has 5,216 followers. His social media account is full of his career and achievements related posts.