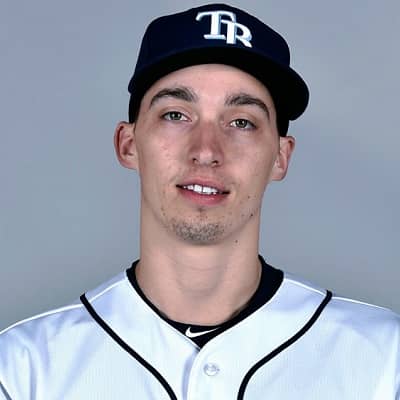 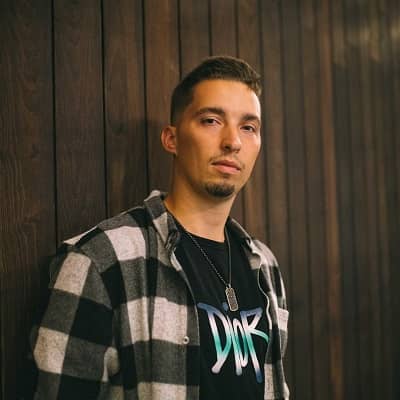 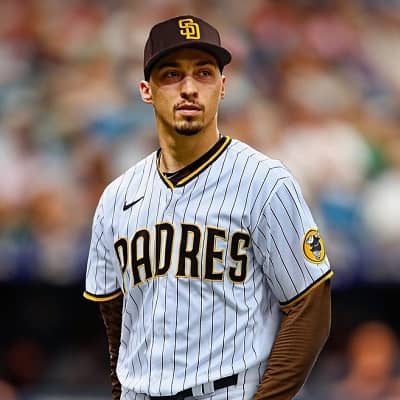 Blake Snell is a young and prominent American baseballer. Blake Snell plays as a professional pitcher for the San Diego Padres of Major League Baseball (MLB).

Blake Snell was born on December 4, 1992, and he is currently 29 years old. Likewise, Blake is originally from Seattle, Washington. His full name is Blake Ashton Snell and his star sign is Sagittarius.

Talking about his family, Blake’s father is Dave Snell and he is a former minor league baseball player/pitcher. It was his father’s encouragement that helped Blake grow into MLB All-Star. Likewise, he also has a brother named Dru Snell. 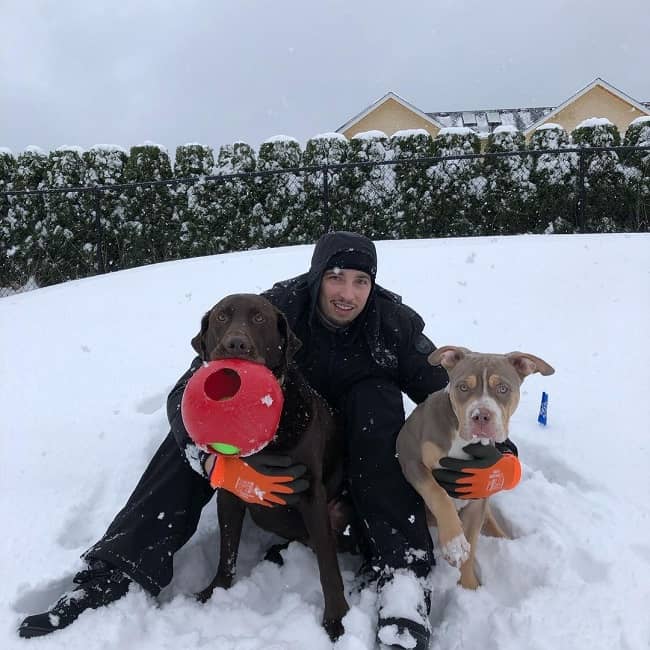 Caption: Blake Snell posing for a photo with his pets in the snow. Source: Instagram

Talking about his educational journey, Blake Snell attended Shorewood High School in Shoreline, Washington. There, Blake Snell played for the baseball team. Later on, Blake committed to the University of Washington.

Previously in high school, Blake trained at a facility that his father owned. Then in his senior season, Blake Snell recorded a 9–0 win-loss record. At the same time, Blake also recorded a 1.00 ERA with 128 strikeouts in over 63 innings pitched.

He has earned a decent amount of money throughout his career. Moving on, Blake has a net worth estimation of approximately $7 Million as of 2021.

Professionally, Blake Snell is a prominent baseball player. He plays as a pitcher for the “San Diego Padres” of Major League Baseball (MLB). Blake then made his MLB debut with the “Tampa Bay Rays” on April 23, 2016. It was at Yankee Stadium.

The young baseballer also won the “Cy Young Award” in the American League (AL) in the year 2018. Back then, Blake was an All-Star and led the league in both wins and earned run average (ERA). Moreover, he was the second player to win in the franchise’s history after David Price. He was also the second from the AL East to win it in the past 15 years. 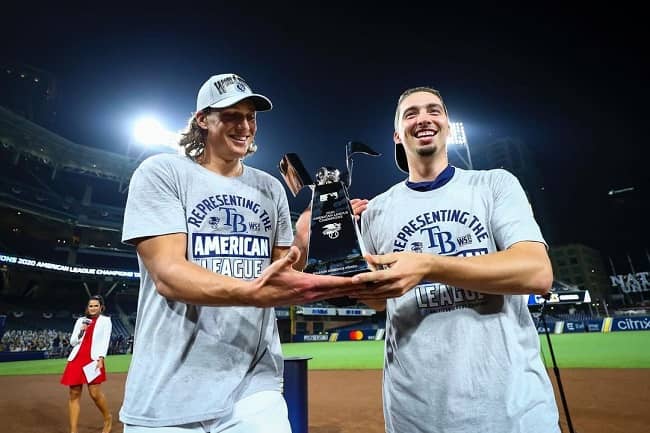 Caption: Blake Snell posing for a photo with the trophy. Source: Instagram

Additionally, Blake Snell is the first 20-game winner in the majors since 2016. The young player has the fewest innings of any 20-game winner in history with 169 and counting with two starts left. Before him, Jared Weaver had 188⅔ in the year 2012.

Similarly, the same year, he also had a chance to be the seventh pitcher in the live-ball era since 1920 to win 20 with a sub-2.00 at age 25 or younger. Prior to him, Tampa’s Dwight Gooden for the Mets had this chance in the year 1985. 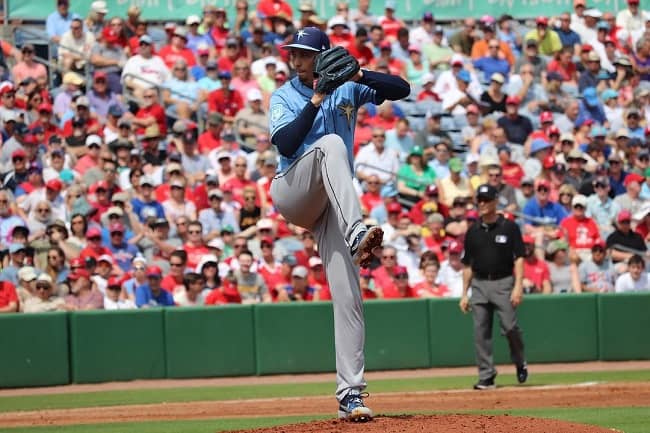 Additionally, Blake Snell is the sixth AL pitcher in the past 20 years to win 20 at age 25 or younger. He is also the first to win 20 from a 2011 draft class. Others to win this includes Gerrit Cole, Trevor Bauer, Jose Fernandez, and Kyle Hendricks. Among all, only 13 pitchers taken in that draft have 20 career wins.

Moreover, Blake is the second 20-game winner born in Washington state. The first on the list is Vean Gregg. Vean won 20 in 2011-13 for the “Cleveland Naps”. Also, Blake was suddenly discovered by the national media. He was doing TV interviews with MLB Network and ESPN’s Scott Van Pelt.

Blake Snell shared an Instagram photo on 14 September 2020 and its caption was “Happy Birthday Queen ?”. It is an adorable photo of an unnamed girl. Moreover, in this photo, we can see that both Blake and the girl are wearing matching shoes. Hence, we can only assume that the girl in this photo is his lover. However, other than this photograph, Blake has not shared any verified information regarding his love life and affairs. 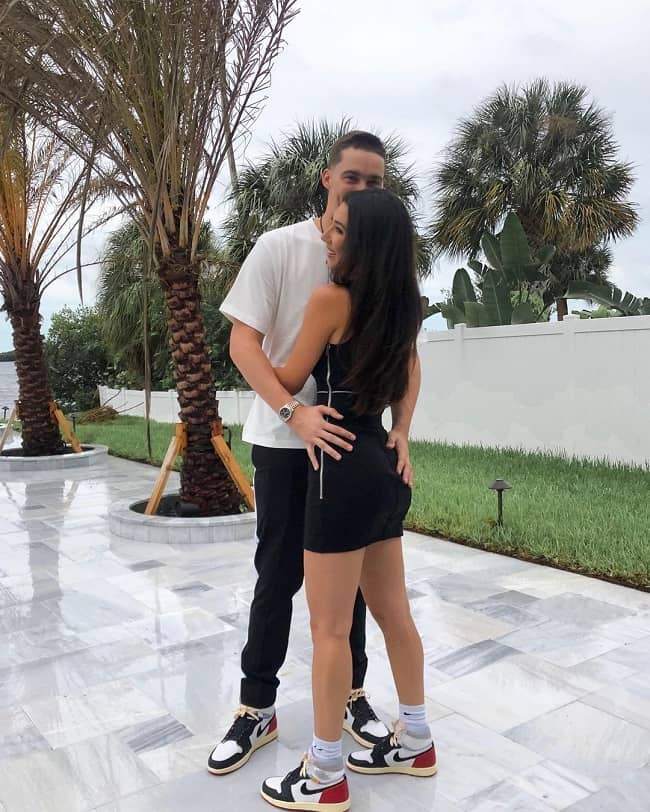 Blake Snell’s height is 1.93 meters or 6 feet 3 inches and his weight is approximately 98 kg. As a teen, Blake Snell was 5 feet 6 and wore shoe-sized 13. Later, by the time Blake was a junior at Shorewood, he was already 6 feet 3 inches. Moreover, Blake has brown hair and eyes of the same color.

Blake joined Twitter in February 2011 and so far has over 41K followers on his @snellzilla4 account. He is also available on Instagram under the username @snellzilla4. As of February 2021, Blake has earned more than 110k followers.

Further, the baseball player is also active on Twitch. His username on this platform is @Classiclyfamous and he has earned over 38.4K followers on this account.