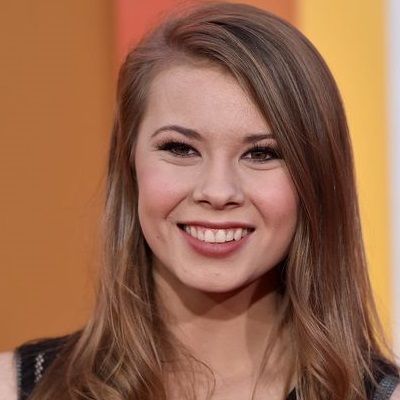 Bindi Sue Irwin was born on 24 July 1998 in Buderim, Queensland, Australia. She is 25 years old as of 2022. Similarly, her family includes father Steve, mother Terri, brother Robert, and grandfather Bob Irwin. All the family members are well known for their work with wildlife and nature. Moreover, the family also owns Australia Zoo, located on the Sunshine Coast, Queensland.

She holds dual nationality, an Australian and an American. Furthermore, she also stated in an interview with the ‘Brisbane Times about being able to vote in both countries. Caption: Bindi Irwin in the childhood photo posing with her family (Source: Instagram)

Until 2014, she was homeschooled and hence is good friends with her teachers. Later, she joined ‘TAFE Queensland East Coast’, completing a Certificate III in Business. As mentioned on Wikipedia, she is currently studying Tourism to obtain a Certificate III in this faculty.

Irwin started appearing on television in her father’s shows from an early age. She also appeared in the 2002 movie The Wiggles: Wiggly Safari. Furthermore, Bindi Irwin has starred in nine television programs; including Bindi’s Bootcamp, Crikey! It’s the Irwins, and Bindi the Jungle Girl, among others.  In the same way, Irwin has starred in three movies (2002, 2010, and 2013).

Irwin also participated in Dancing with the Stars with Derek Hough, a professional dancer. They won the first position in season 21. Likewise, she has also starred in famous TV shows like Late Show with Letterman and The Ellen DeGeneres Show. Along with acting and dancing, she has also tried her hand at singing and rapping. She has also published a few fitness DVDs for kids and released music albums. In March 2014, she made an appearance on Good Morning America with her family, where she announced a partnership with animal theme park company SeaWorld.

On 1 April 2019, she made an appearance as a guest judge during week 7 of Australian Dancing With The Stars season 16.

In the year 2008, she received an award ‘Most Popular New Female Talent Logie Award’. The same year, she also won a Daytime Emmy Award titled ‘Outstanding Performer in a Children’s Series. Likewise, Irwin also won the Dancing with the Stars Season 21 with Derek.

Similarly, in 2006, she became the youngest person to appear on the cover of ‘New Idea’, an Australian magazine. Furthermore, she was also appointed as a ‘tourism ambassador’ at a young age.

On 25 March 2020, Bindi and Chandler married in a private ceremony at the Australia Zoo. There was no guest due to the COVID-19 pandemic.

On 11 August 2020, she announced through Instagram that she and Powell were expecting their first child together in 2021. On 22 September 2020, the duo revealed that they are expecting a girl. Chandler Powell is a professional wakeboarder from Florida, USA. The couple started dating in 2013 and got engaged on her 21st birthday.

Bindi Irwin has had her set of controversial issues. One of them is her involvement with SeaWorld Orlando. Despite being an advocate for wildlife, she signed up for SeaWorld’s Youth Ambassador in early 2014. It became controversial due to the Blackfish documentary which highlighted SeaWorld’s treatment of its Orca whales.

Likewise, another controversy ignited in 2014 with Irwin’s tweet about how she wanted young girls to dress their age, cover up and try not so hard to appear older. These opinions clashed with that of co-star Caitlin Stasey hence escalating into a scandal. It re-ignited in 2015 due to the Instagram posts where Irwin wore make-up and fitting clothes, contrary to her statement back in 2014.

Net Worth and Charity

Bindi owns a house on Sunshine Coast, Queensland with her boyfriend. The couple moved into the house in 2018. Similarly, they also own a boat named ‘Croc One’, which they keep on the jetty.

She has an estimated net worth of $2 million, 10% of which she commits to Wildlife Warriors, a charity her family founded in 2002.

Moreover, Bindi Irwin is a natural blonde with brown eyes. She wears clothes sized 6, shoes sized 8, and bras sized 32C, all according to the U.S. standard. Furthermore, she also revealed that dancing helps her fit and stay in shape.

She has personal accounts on various platforms. She has 4 million followers on Instagram, 650 thousand on Twitter, and over 590 thousand on Facebook. Likewise, she is also very active on these platforms sharing her life events as well as her profession.