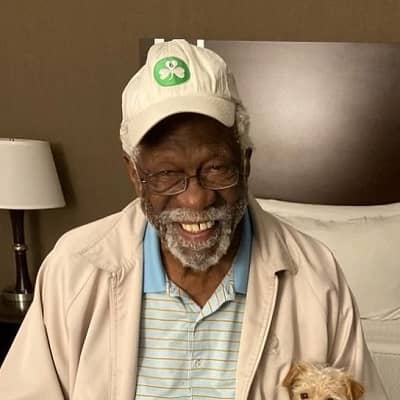 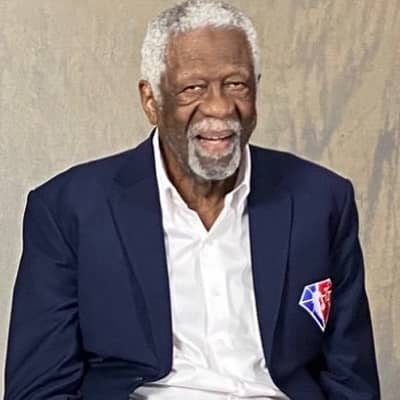 Bill Russell was a professional basketball player and civil rights activist from the United States. Moreover, Bill Russell played as a center for the Boston Celtics in the NBA from 1956 to 1969 and was a five-time NBA Most Valuable Player and a 12-time NBA All-Star, he was the centerpiece of the Celtics dynasty that won 11 NBA championships.

William Felton Russell best known as Bill Russell was born on the 12th of February, 1934 in Monroe, Louisiana, the United States of America. At the age of 88 years old, he passed away and holds an American nationality. Moreover, he has a birth sign of Aquarius and believes in Christianity.

He is the son of Charles Russell (father) and Katie Russell (mother). Moreover, he grew up in an area where there was racial discrimination, and his family frequently experienced widespread acts of racism. He was raised in poverty and had a rough childhood. When he was only twelve years old, his mother passed away.

Talking about his academic career, he attended McClymonds High School and began playing basketball there. George Powles, his coach, encouraged him to improve his talents and become a good player. He received a scholarship from the University of San Francisco (USF). He was happy to earn this scholarship because it allowed him to escape a life of poverty and racism.

Moreover, he succeeded at USF under Coach Phil Woolpert, who helped him develop his defensive technique. He became the focal point of a USF team that developed into a formidable college basketball team.

Bill Russell was chosen by the Boston Celtics in the 1956 NBA Draft because of his defensive toughness and rebounding skills. He was named captain of the United States national basketball team that competed in the 1956 Summer Olympics, and he also helped the team earn a gold medal. In December 1956, he began playing for the Celtics in the 1956-1957 season.

He appeared in 48 games and averaged 14.7 points and 19.6 rebounds per game. The Celtics were already a high-scoring team, but the emergence of Russell accentuated their strengths. In his debut NBA playoff game against the Syracuse Nationals in 1957, he had 16 points, 31 rebounds, and 7 blocks. 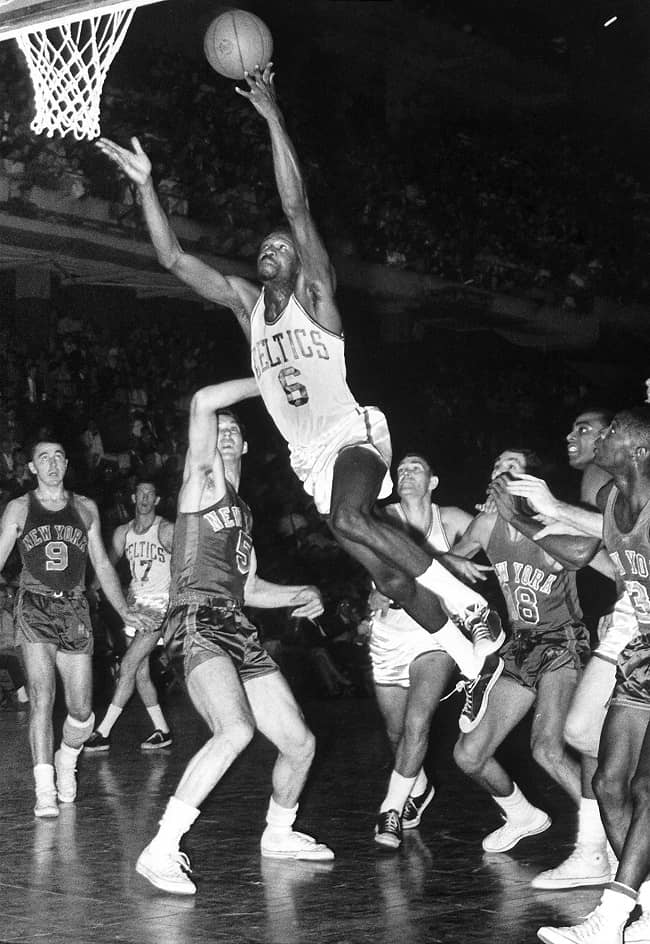 The Celtics defeated the Nationals 108-89 and swept them in three games. At the start of the 1957–1958 season, the Celtics won 14 straight games. He received the award for that season’s Most Valuable Player in the NBA. In the 1958–59 season, he continued his incredible play, averaging 16.7 points and 23.0 rebounds per game. The 52 wins of the Celtics set a league record.

In November 1959, the Celtics faced up against the Philadelphia Warriors. Since both Wilt Chamberlain and Bill Russell were outstanding centers, the game was mostly seen as a contest between them. By a score of 115–106, the Celtics won. He led his team to a 57-22 record in the 1960–61 season with averages of 16.9 points and 23.9 rebounds per game.

The Celtics became the first team to win 60 games in a season the following year, and he was once again selected as the NBA’s Most Valuable Player. During the 1963–1964 season, he averaged 24.7 rebounds and 15.0 points per game. He continued to perform well during the 1964–1965 season, helping the Celtics win a league-high 62 games.

Coaching Career and other works

Red Auerbach, a Celtics coach, left his position before the 1966–1967 season. He was allowed to work as a player coach, which he accepted, making him the first NBA coach of African American descent. Moreover, he was getting older and more worn out, and during the 1967–1968 season, his numbers were gradually getting poorer. He continued to average 12.5 points and 18.6 rebounds per game.

At the age of 35, his playing career was over. After retiring, he worked as the head coach of the Sacramento Kings from 1987 to 1988 and the Seattle SuperSonics from 1973 to 1977. Bill Russell joined NBA on ABC in 1971 and provide commentary for the Game of the Week. Throughout the 1970s and into the middle of the 1980s, he worked as a color commentator for CBS and TBS, became a vegetarian, and picked up golf. However, he found broadcasting to be uncomfortable.

He hosted Saturday Night Live on November 3, 1979, and he also took part in several sports-related sketches.   In addition, j penned books, generally in collaboration with a published author, such as 1979’s Second Wind, and appeared as Judge Roger Ferguson in the Miami Vice episode “The Fix” (aired March 7, 1986).

He was one of the most successful basketball players to ever play in the United States. In 13 seasons as a player with the Boston Celtics, he won 11 NBA titles. He was the first NBA player to average more than 20 rebounds per game for a whole season and only the second player to ever make 51 rebounds in a single game.

He was chosen three times for the all-NBA First Teams and received five MVP honors during the regular season. Barack Obama awarded him the Presidential Medal of Freedom in 2011 in honor of his contributions to the Civil Rights Movement both on and off the court. 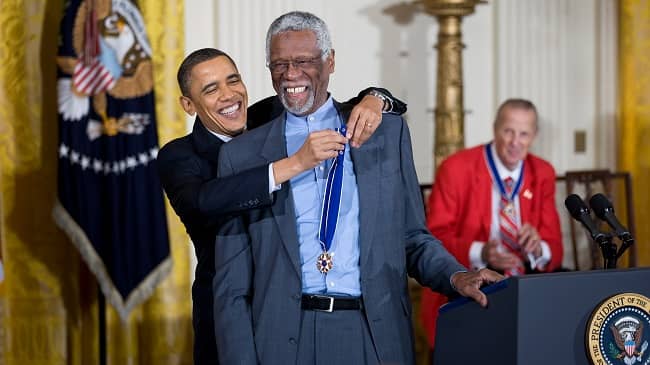 Caption: Bill Russell received the Presidential Medal of Freedom in 2011 in honor of his contributions to the Civil Rights Movement both on and off the court from Former American President Barack Obama (Source: Obama White House Archives)

At the time of his death, Bill’s net worth was estimated around $10 million. Apart from that, there is no other information regarding his earnings and income.

Bill Russell married three times in his life. Firstly, he married s college sweetheart Rose Swisher in 1956. With the marriage, the couple has three children; daughter Karen Russell, the television pundit and lawyer, and sons William Jr. and Jacob. However, the couple divorced in 1973.

After that, he married Dorothy Anstett, a white woman who was once Miss USA, in 1977. They divorced in 1980, ending their short marriage. Marilyn Nault was his wife from his third marriage, which lasted till 2009. However, Jeannine Russell and Bill married in 2018 when he was 84.

Bill stands 6 feet 8 inches tall and weighs around 100 kg. Moreover, he has white hair with brown eyes color and there is no other information regarding his other body measurements. 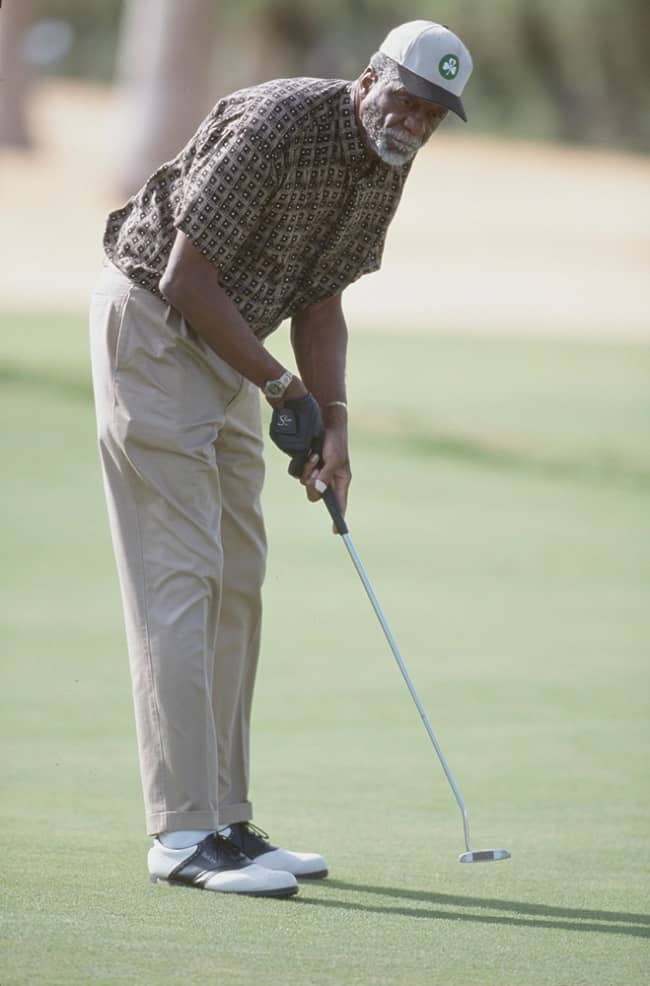 At the moment, Bill is no more in this world. Due to this, he is not present on social media such as Instagram, Twitter, and Facebook.