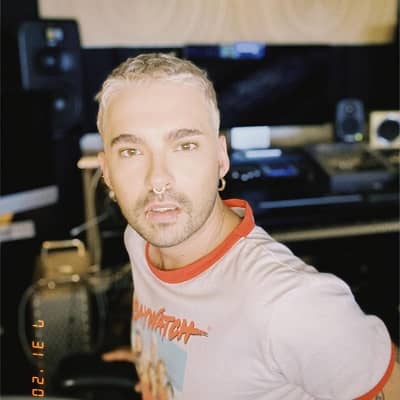 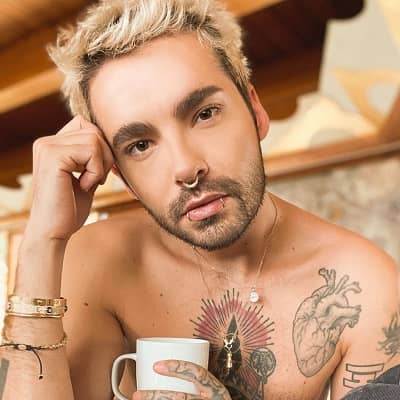 Bill Kaulitz is a prominent voice-artist, model, singer-songwriter, and also designer. Bill Kaulitz is famously known as the main singer of his band, Tokio Hotel. In the band, he performs together with his guitarist brother, Tom. Also, Georg Listing is the bassist and Gustav Schafer is a drummer in the band.

The musician, Bill Kaulitz was born on September 1, 1989. His birthplace is in Leipzig, East Germany. Also, he was born to Simone Kaulitz, and Jorg W. Simone Kaulitz is a freelance tailor. Bill’s biological parents separated later on. Then, her mother married Gordon Trumper. Gordon Trumper is the guitarist of the rock band Fatun. 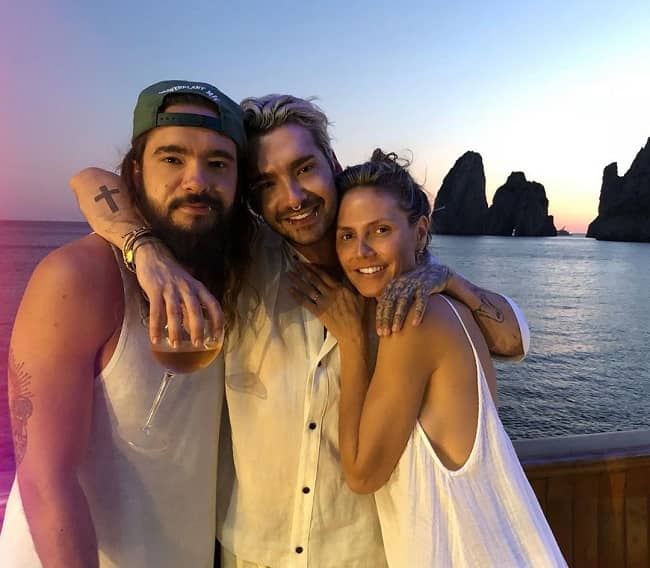 Caption: Bill Kaulitz with his brother and sister-in-law (Instagram)

On top of that, he has a twin brother, Tom. As for now, Bill is 31 years old. He has a birth sign as Virgo. And his nationality, as well as ethnicity, is German. Surprisingly, when he was just ten years old,  he and his brother, Tom used to perform live in Magdeburg.

In the year 2006, Bill had lent his voice to the role of Arthur for the German version of the flick, Arthur and the Invisibles. In the month of May 2012, Kaulitz got featured on the track, If I Die Tomorrow for Far East Movement’s album Dirty Bass. Talking about the year 2016, Bill came up with his solo project, I’m Not OK under the moniker Billy.

After two years performing live in Magdeburg, he and Tom created the band Devilish also with Georg Listing and Gustav Schafer. It was unfortunate that the band did not earn much publicity and fame in their initial phase. Till the year, 2005, they could not achieve much success. Latterly, the band made a contract with Interscope Records.

After a certain time, Kaulitz and his group started performing with the name, Tokio Hotel. Then, they released their debut album, Schrei (Scream). And, the album had featured the single Durch den Monsun (English title- Through the Monsoon). The second album of his band was Zimmer 483. It featured the singles Users Ende der Welt, Spring night, An Deiner Seite (Ich bin da ), and Helig.

With the success of the band, they decided to re-record several songs from their albums. The name of the albums is Zimmer 483 and Schrei. Amazingly, the band members went on their USA tour. After that, they then moved to Europe for their 1000 Hotels Tour. It was commenced in March 2008. 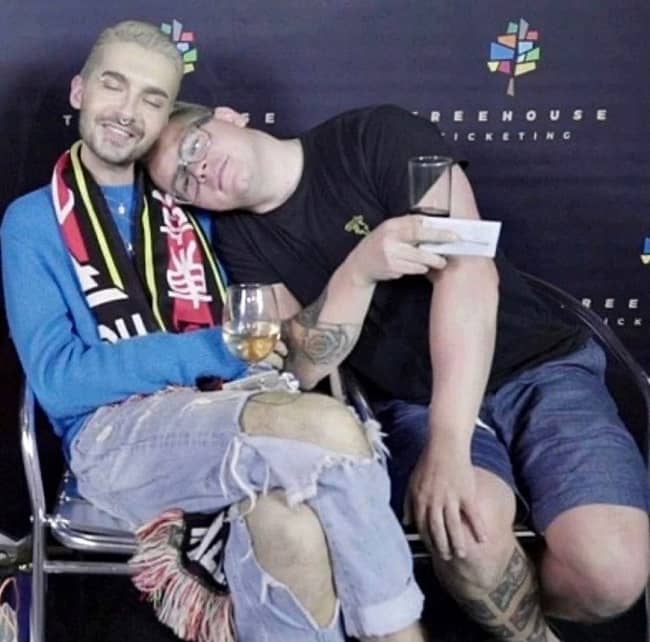 Not only this, but Tokio Hotel also released its third studio, Humanoid in 2009. And it featured the tracks, Automatisch, and Lass uns laufen. Eventually, they collaborated with Kerli to record the track, Strange. It was for the film, Alice in Wonderland and its accompanying soundtrack, Almost Alice. In 2014, the band released their fifth album, Kings of Suburbia. Further albums are Dream Machine and Boy Don’t Cry.

Due to the COVID-19 pandemic, The LATAM leg of the Melancholic Paradise tour got canceled on March 12, 2020. In August 2020, he announced that the singles “Durch den Monsun” and “Monsoon” would be re-recorded and released early October 2020 to celebrate the single’s 15th anniversary, as well as more songs from the upcoming album, and more from his solo career.

Bill wrote his first autobiography, “Career Suicide: Meine ersten dreißig Jahre” (“My first thirty years”). Written in German, and will release on January 4, 2021. Also, An English version of the book is in production.

Individually, Bill has not achieved awards and nominations. However, his band, Tokio Hotel has received five awards and one nomination.

In 2005, his band was the winner of the Bambi Awards for Pop-National. In Golden Camera 2008, the band won the Best Music National award. Similarly, the band could be able to achieve the award of Biggest Fans in 2013 and Best Inter Act in 2007. These were the awards of the MTV Europe Music Awards.

Additionally, Tokio Hotel was nominated for Best Pop Video of  Ubers Ende der Welt in MTV Video Music Awards in 2008. In the same year and the same award, it won for the title, Nest New Artist.

On the basis of some latest research, Bill Kaulitz’s net worth is estimated to be more or less about $30 million. Nevertheless, the singer’s details such as personal belongings, endorsements, salary are not revealed in public. They are kept a low profile. But it is known that his main source of income is through his albums and songs.

The famous artist has been in several previous relationships. Earlier, it was said that he was together with Kim Paradise in the year, 2008. But the truth was not cleared and claimed. Nevertheless, he had dated Rach L. in the same year.

Surprisingly, he also dated Natalie Franz after a certain time of separating with his previous partners. Nonetheless, he is most probably single for now. Currently, he has not been spotted with anyone. It seems as if he wants to focus on his career instead of staying in a relationship with anyone. Therefore, he is not dating anyone for the time being.

Besides, there are certain controversies and scandals which Bil had to go through. During the time of early 2009, several women stalked him and his brother. In Germany, the women followed Tom Kaulitz to their parent’s home and attacked their mother.

Secondly, Tom had hit one of the stalkers in the month of April 2009 at a gas station and also drove off. Conversely, the girl herself charged him fro assault. On top of that Tom also filed a complaint against that girl for the reason of stalking. Ultimately, the charges against Tom were lifted in December of the same year. Also, there has been a rumor about Bill Kaulitz’s sexuality. Various questions were raised in regard to this topic. Many sources claimed that he is gay.


Further, the handsome singer is 6 feet and 4 inches tall. Likewise, his weight is approximately 80 kg. And, his shoe size is 11(US). However, he has not revealed his dress size and other details about his exact body measurements. Besides, his eyes are dark brown in color and have black colored hair. 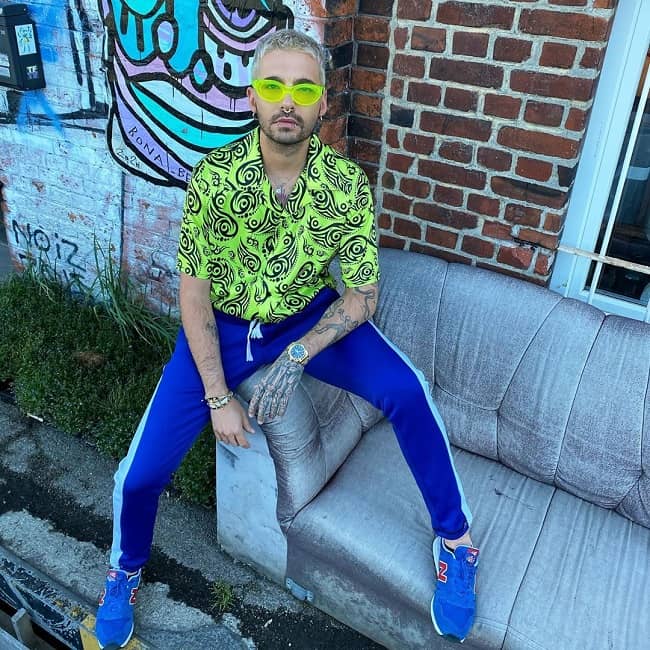