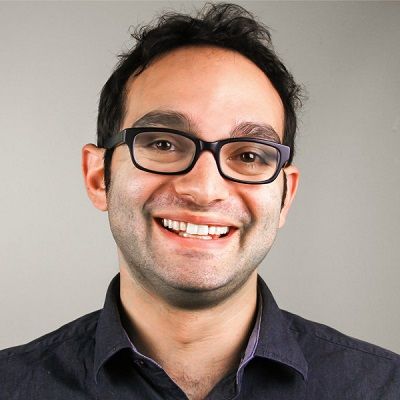 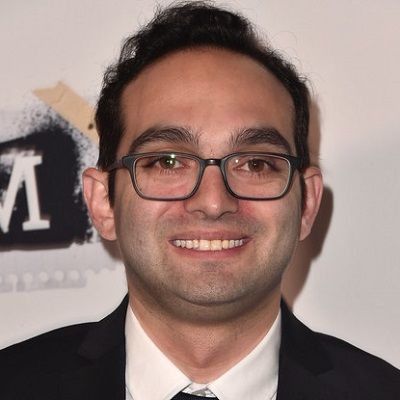 Benny Fine is a famous American web-content creator and producer. Benny and Rafi are popular for their reaction videos posted on their official YouTube channel ‘FBE.’ Moreover, he is one half of the YouTube comedy duo known as the Fine Bros alongside his brother Rafi Fine.

Benny Fine was born on March 19, 1981, in Brooklyn, New York, USA. As of 2021, he turns 40 years old and his birth sign is Pisces. He was born to Yehuda Fine and Ellie J. Fine. His father is a writer, speaker, and educator who acted in many of their React videos like “Elders React to Ghost Elevator Prank”. And his mother is a Democrat.

He grew up in an orthodox Jewish family in Brooklyn. Benny has two siblings, a brother named Rafi Fine and a sister named Dorah Fine. Benny started college at the young age of 15. And they spent their teenage years were in Sullivan County, New York mostly. 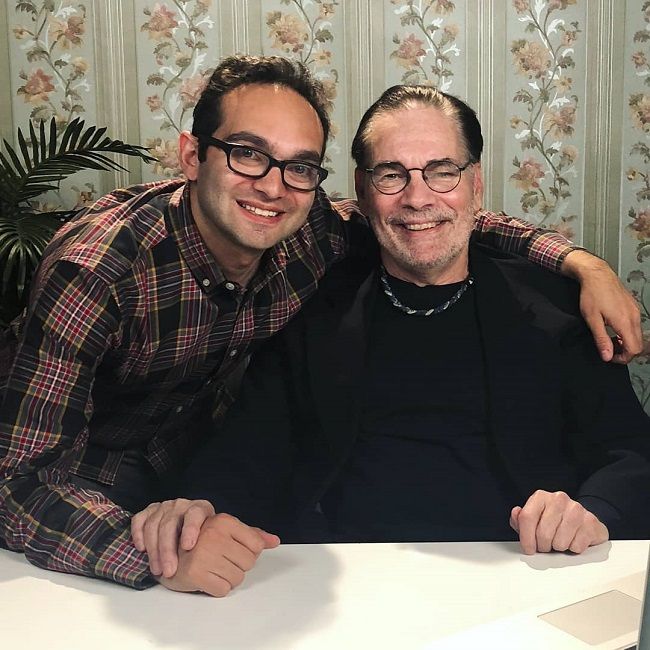 Benny and Rafi initially made comedy sketches. And, they began recording the sketches soon after they got their first video camera Benny and Rafi created a live-action feature that was screened at various comedy film festivals in 2000.

The amazing reception of their film inspired them to create a feature film each year. This helped them pave their way to Hollywood. The Fine Brothers also won a few awards for young filmmakers. However, Benny and Rafi soon realized that creating comedy sketches would not be enough to reach Hollywood.

Soon, Benny and Rafi decided to step into the social media arena. In 2003, they launched their first website. They uploaded their first web video the following year. Benny and Rafi also made a few alterations to their video-making style. They used the web video segment extensively to earn their film debut. Their earlier videos contained mature social satire and humor.

And in 2004, Benny and Rafi created a feature-length live-action comedy, ‘G.I. Joe: The Epic Saga.’ Following this, they uploaded more sketch comedies and entertaining content on websites such as ‘MySpace.’ In 2007, the two launched their official ‘YouTube’ channel, ‘FBE’ (formerly ‘TheFineBros’ and ‘Fine Brothers Entertainment’).

The channel originally hosts reaction videos that feature people of all ages reacting to various incidents. This is the most popular segment on their channel, and it later became their trademark. Additionally, Benny and Rafi created a narrative web series and a timed spoiler series, too.

Their main channel hosts some of their most popular scripted, narrative, and unscripted series, including their award-winning and notable reaction series. On October 16, 2010, the Fine brothers published the first episode of their most-viewed video segment, ‘Kids React.’ The series later become a notable ‘React’ franchise on YouTube. The videos titled ‘Kids React to Gay Marriage’ and ‘Teens React to Bullying (Amanda Todd)’ are the two most-viewed videos on ‘FBE.’ One of the most popular series in the ‘React’ segment is ‘Celebs React,’ which features the reactions of famous people.

Ultimately, the Fine brothers gained a foothold in the YouTube community as comedy content creators. The Fine brothers launched their second YouTube channel, ‘TheFineBros2’ (now FBE2) on May 14, 2009. The channel is essentially dedicated to funny behind-the-scenes clips filmed by the Fine brothers. In the channel, Benny and Rafi take an effort to introduce their staff to the audience. They also use the channel to interact with their reactors and take suggestions from their viewers. The channel also has several clips from their news podcast, ‘All We Know.’

Benny and Rafi launched their third YouTube channel, ‘REACT,’ on July 30, 2013. As the title of the channel suggests, this initiative was their way to expand the reach of their ‘React’ content. The channel features video segments on gaming, food, music, and game shows.

The Fine brothers soon joined ‘Maker Studios’, a California-based multichannel network. They prepared a project with Shane Dawson, a popular “YouTuber” and one the most prominent collaborators of ‘Maker Studios.’ Benny and Rafi led the production and the creative divisions of the project.

And apart from Shane Dawson, the Fine Brothers have collaborated with a number of popular social-media celebrities, such as ShayCarl and KassemG. Moreover, some of the most popular YouTube channels, such as ‘Smosh’ and ‘PewDiePie,’ have been featured on ‘FBE’s react video segment. They were the guest judges in the second season of the online video-making talent competition ‘Internet Icon.’

On January 24, 2008, Benny and Rafi launched a show titled ‘Lost: What Will Happen Next?’ A parody show based on the TV series ‘Lost,’ it was the first long-running series on the ‘FBE’ channel. The Fine Brothers also collaborated with the famous comedy duo ‘Rhett and Link’ to create a parody song of ‘Lost.’ Benny and Rafi worked with ‘Maker Studios’ till 2009.

The Fine Brothers made the venture a success. They also worked on creating and popularizing multichannel networks (MCNs). Benny and Rafi have always shown their gratitude toward ‘Maker Studios’ for their professionalism and ethical treatment of their creators. 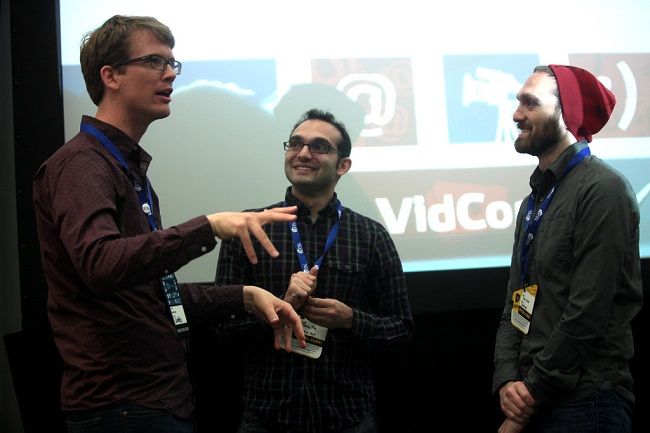 Something more about their career

Furthermore, the YouTube partner program regulates all of the Fine Brothers’ YouTube channels. It also allows Benny and Rafi to earn from ad revenues on their videos. Further, Ford and Comedy Centra have also sponsored the duo. In December 2013, Benny and Rafi ended the contract they had with the former San Francisco-based multichannel internet TV network ‘Revision3.’

They then signed a deal with ‘Fullscreen,’ an American entertainment company and a global network. They simultaneously maintained their terms with YouTube multichannel networks and featured the network in their vlog series, ‘Fine Time,’ where they discussed various ways of navigating such networks.

On April 30, 2014, the Fine brothers announced that a spin-off of the ‘Fine Bros’ React’ series, titled ‘React to That,’ would be aired on ‘Nickelodeon.’ Despite venturing into TV, the duo continued creating videos for ‘YouTube.’ ‘React to That’ continued for only 12 episodes. Benny and Rafi are also credited for creating the 2015 ‘TruTV’ series ‘Six Degrees of Everything,’ a show that also featured them as hosts.

In 2016, Benny and Rafi created ‘Sing It!,’ an American situation-comedy web series. The series premiered at the ‘Tribeca Film Festival’ and had an online release on May 25, 2016, on ‘YouTube Red,’ a paid service of the original streaming series. Benny stated that the series would not return for a second season on December 3, 2017. Moreover, some of the most famous works of the Fine brothers have been featured on the websites of ‘The Wall Street Journal,’ ‘Time,’ ‘Variety,’ and ‘MSNBC.’

They are credited for launching ‘MyMusic,’ a sitcom show featuring celebrity guests. The show has also featured several members of both ‘Kids React’ and ‘Teens React.’ ‘MyMusic’ bagged nine ‘Streamy Award’ nominations in the third installment of the event, of which the Fine brothers earned three.

On December 5, 2017, the Fine brothers released ‘F the Prom’ (also known as ‘F*&% the Prom’), a teen comedy that was released as a direct-to-video film. Benny had produced the film. He had also written the script of the film, along with Rafi and Molly Prather. 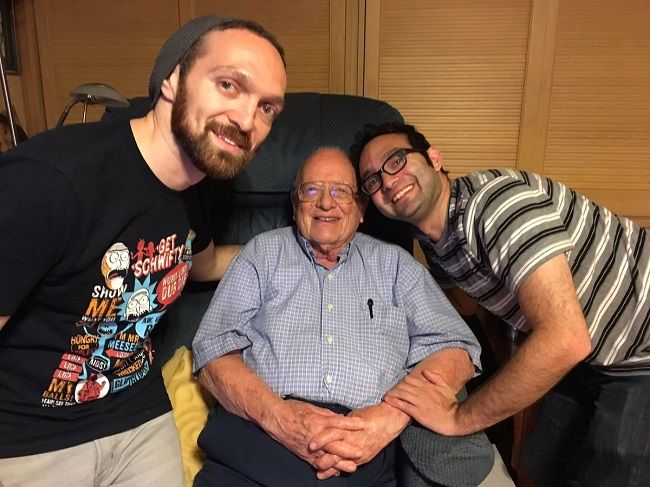 Caption: Benny Fine clicking a photo with his grandpa and brother. Source: Twitter

The Fine brothers announced that they would license and trademark their most popular and successful video series, ‘React’ on January 26, 2016. They stated that other creators must pay them to create reaction videos. They also claimed that ‘The Ellen DeGeneres Show,’ one of the most popular TV shows of the time, had copied their content. The statement, however, backfired and caused the Fine brothers a considerable number of subscribers.

Later, on February 1, the Fine brothers withdrew all ‘React’ trademarks and trademark applications and discontinued the ‘React World’ program. Additionally, the duo deleted their original ‘React World’ announcement video that had started the controversy.

Benny has a height of 5 feet 7 inches and weighs around 70kgs. He has maintained a fit and healthy body physique. He has brown hair and eyes of the same color. Benny probably has an amazing personality. His other body measurements are not provided.

No doubt, he pockets a huge amount of money through his profession. Fine Brothers earns a very good amount of money However, their estimated net worth is around $10 million.