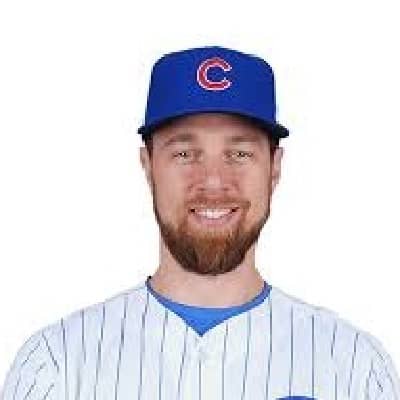 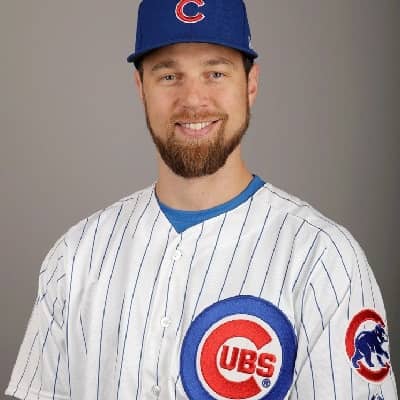 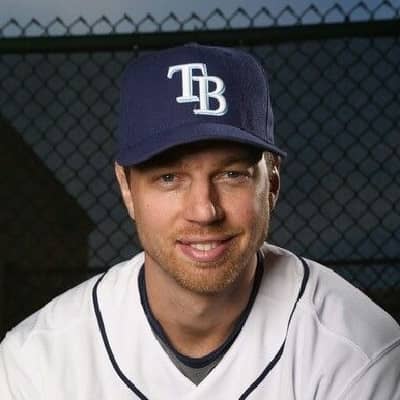 Ben Zobrist was born on the 26th of May, 1981, in Eureka, Illinois, USA. Ben is 41 years old as of 2022. He was born to parents  Cynthia “Cindi” (née Cali) and Tom Zobrist. His father Tom is senior pastor of Liberty Bible Church in Eureka. Ben started playing baseball at the age of 8. Ben and his friends built a Wiffle ball field behind his house.

He grew up as a St. Louis Cardinals fan. He grew up with 4 siblings-Serena Zobrist, Jessica Zobrist, Peter, and Noah Zobrist.

He finished high school at Eureka High School in 1999. By the time he graduated, no professional scouts or college recruiters considered him and he thought baseball was over for him.

After he was scouted or recruited, he thought of attending Calvary Bible College in Kansas City, Missouri. His high school coach encouraged him to spend $50 and participate in an annual summer event that showcased seniors in Peoria, Illinois. After he played in the showcase, he was offered to play college baseball at Olivet Nazarene University. He pitched and played shortstop and second base during his time at Olivet.

He was named to the all-CCAC and all-Region VII First Teams in 2002, as well as earning NAIA Honorable Mention All-America honors. In 2003, he receive Chicagoland Collegiate Athletic Conference Player of the Year, first-team All-Region VII, and first-team NAIA All-America. For his senior year, he transferred to Dallas Baptist University, he played shortstop and batted.378 with a.590 slugging percentage.

Ben’s career started when he started playing for the Twin City Stars of the Central Illinois Collegiate League (Now Prospect League) in 2002. He then played for the Wisconsin Woodchucks of the Summer Collegiate Northwoods League in 2003. He won team MVP and led his team to the League Championship.

Houston Astros drafted him in the sixth round of the MLB draft in 2004. Zobrist and right-handed pitcher Mitch Talbot were traded to the Tampa Bay Rays for first baseman/designated hitter Aubrey Huff and cash on July 12, 2006. On August 1, 2006, he made his MLB debut with Tampa Bay. He played shortstop & struggled in his first two seasons with Tampa Bay.

Ben met a “swing mechanic” (batting coach) who helped him to improve and it proved evident after his performance improved in 2008 and he went to his first World Series as a player with the Rays. He played right fielder and a backup shortstop for the 2008 season. During the 2009 season, he was placed in the right field and starting-second baseman after Akinori Iwamura’s injury.

In 2009, he hit three grand slams, leading the Rays and he was also among the league leaders in slugging percentage. He was also selected for his first All-Star Game in St. Louis in 2009. He was named MVP of the Rays for 2009 by the Tampa Bay Chapter of the Baseball Writers’ Association of America. In 2009, he led all hitters in the majors for wins above replacement with 8.6.

He signed a deal potentially worth a $30 million, three-year contract extension through the 2013 season, with a team option for 2014 and 2015 on April 23, 2010. He batted .238, with a .353 slugging percentage in 2010. Ben led the American League in WAR with 8.8 in 2011. He played in various positions during the 2012 season. He played 42 games as a shortstop since his rookie season, he also played as an outfielder and second baseman. Ben finished the season with 20 home runs, accomplishing the feat for the second time in a row.

Ben was selected as an All-Star for the second time in his career. In the 2013 season, he had a .275 batting average, his highest since 2009. He recorded his 1,000th career hit in the game against the New York Yankees in Yankee Stadium on  September 10, 2014. He and his teammate Yunel Escobar were traded to the Oakland Athletics for John Jaso, Daniel Robertson, and Boog Powell on January 10, 2015.

Ben hit a two-run home run in his first at-bat at the debut match for Athletics. On April 25, 2015, he tore the medial meniscus in his left knee which put him on the 15-day disabled list. The surgery kept him out of action for 4–6 weeks.

He was traded to the Kansas City Royals for Sean Manaea and Aaron Brooks on July 28, 2015. He played a total of 59 games for Kansas and he finished the season with a batting average of .284, with 7 home runs, 37 runs scored, and 23 RBIs. The Royals won the AL Central Division and advanced to the ALDS, where they faced the Houston Astros, with Zobrist starting all five games.

After defeating the Toronto Blue Jays in six games to win the American League, the Royals proceeded to the World Series. After defeating the New York Mets in four of the five games, the Royals won the 2015 World Series. In every game of the 2015 Royals postseason, he played at second base and batted second. In the 2015 postseason, he hit .303 with 66 at-bats, 15 runs scored, 20 hits, two home runs, and six RBIs.

He also received  World Series Most Valuable Player and became the eighth player in Major League Baseball(MLB) history to win consecutive World Series championships on different teams. He played a total of 159 games and batted .232/.318/.375 in 2017. Ben played at various positions and only made three errors. He also had a fielding percentage of .991. In 2017, he also became a finalist for Gold Glove Award at second base.

Ben had a career-high batting average of .305 in 2018. On August 14, 2018, he got elected for the first time in his career by home plate umpire Phil Cuzzi. In 2019, Zobrist began the season by appearing in 26 games before being placed on the restricted list on May 6 due to a family matter. He returned in late July 2019 and began rehab assignments with the South Bend Cubs and Myrtle Beach Pelicans.

In September 2019, Zobrist made his Major League pitching debut, striking out Yadier Molina. Ben batted .260/.358/.313 with one home run in 150 at-bats in 2019. Jon Heyman reported in February 2020 that Zobrist would not be playing in the 2020 season. On March 6, Zobrist announced his retirement and stated that he was open to returning to the Cubs in a non-playing capacity “down the line”. 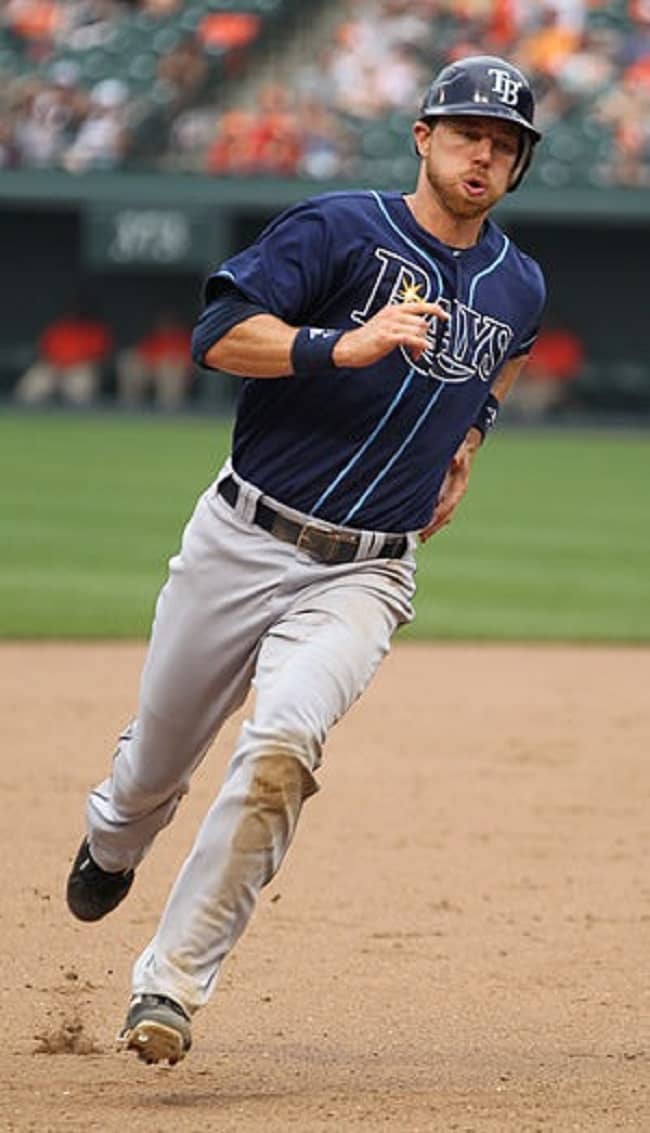 He paused his participation in the 2019 MLB season due to marital problems. In June 2021, he sued his former pastor, Byron Yawn, in Tennessee, alleging that Yawn defrauded Zobrist’s charity, Patriot Forward, of millions of dollars. Yawn had a year-long sexual affair with Julianna Zobrist, according to the lawsuit, which began in the spring of 2019.

He also worked as a former counselor for Camp of Champions USA, a Christian summer day camp in Central Illinois. He speaks about his early life and accomplishments at church events and he credits it all to God.

Ben also appeared in a cameo where he played himself in the 2013 film Ring The Bell, released by Provident Films, along with Rick Sutcliffe, John Kruk, Mark Hall (also playing themselves), and Ryan Scharoun, Ashley Anderson McCarthy, and Casey Bond. He currently lives in Franklin, Tennessee with his children. 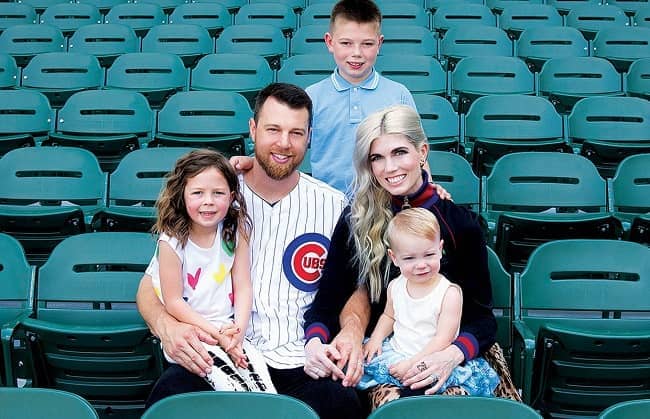 Caption: Ben with his children and ex-wife Julianna Source: Parade

Ben has a height of 6 ft 3 inches and he weighs 95 kg. Zobrist has dark brown hair and his eyes are blue in color. Ben has a brown beard.

Ben Zobrist accumulated wealth from his baseball career. Zobrist has a total net worth of $52 million.