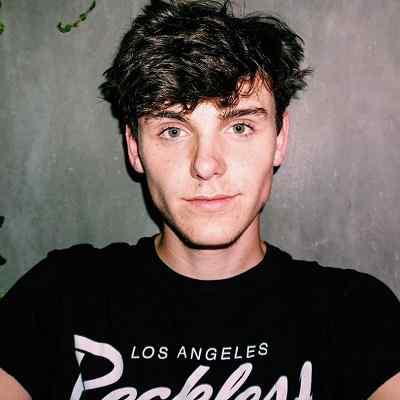 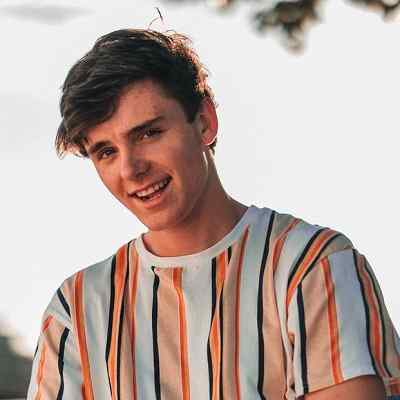 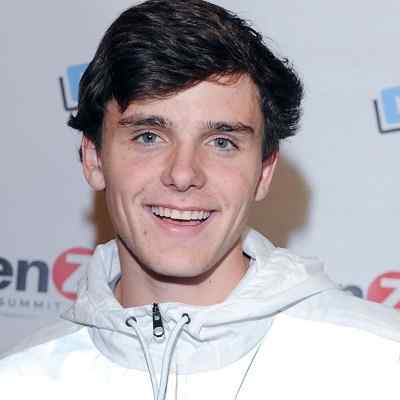 Aydon Holley is a viral TikTok sensation who earned more than 60 million views for a video captured in slow motion and in reverse of him doing a flip-off of a swing set. Aydon Holley is often seen doing flips in addition to posting comedy sketches and pranks.

Aydon Holley is 25 years old. He was born on August 1, 1997, in the United States, under the astrological sign of Leo. There is no information available regarding his family background, parents, siblings, and so on. Other than that, he is from Texas.

Talking about his educational background, he might currently be a University/College student concerning his age. Moreover, he holds an American nationality, and his ethnic background is not available at the moment. He used to play high school football. 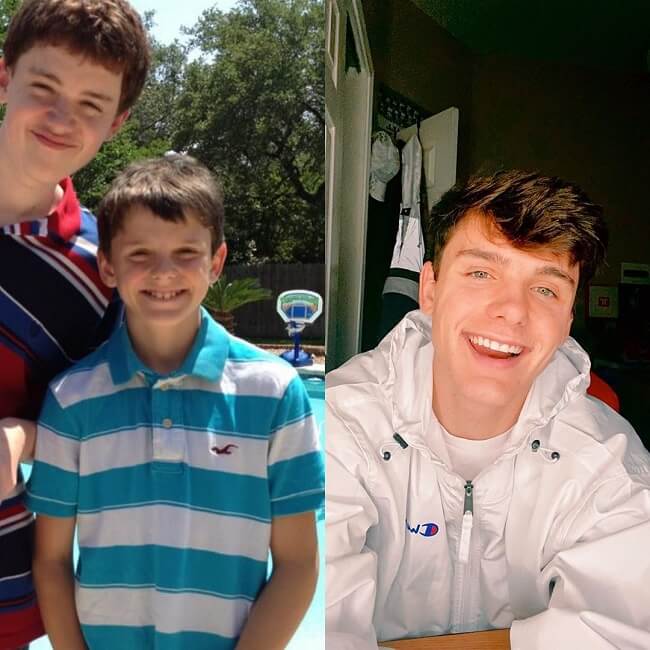 Caption: Aydon Holley in then vs now photo posted on his social media handles (Source: Instagram)

Aydon Holley is a famous social media personality. He has gained fame on the platform TikTok with the username @aydonholley through his viral video which earned more than 60 million views for a video captured in slow motion and reverses of him doing a flip off of a swing set. He was previously known on TikTok by the username of Aydon. h.

Initially, he started using the lip-sync content-creating platform TikTok in early 2019. He used to post his flipping video since then. He started garnering a decent fan following from his early presence through his flipping talent.

His let’s TikTok video on the platform dates back to February 22, 2019. He captioned the video as “Sunflower? #foryou #flips
.” Within very few days, he got viral on the platform. He made the video flipping in the river from the top and put the sound Sunflower – Spider-Man: Into the Spider-Verse – Post Malone & Swae Lee. 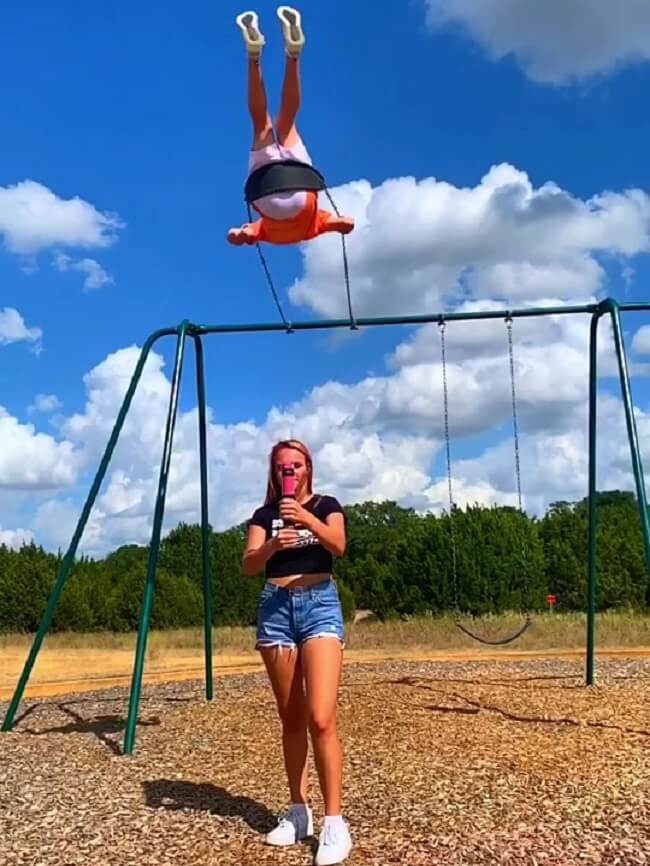 Caption: Aydon Holley on one of the famous TikTok videos captured by his fellow TikTok star (Source: TikTok)

He’s one of the videos posted on November 11, 2019, and has garnered more than 138 million views. He shared his Behind scenes of the recent last post, with the sound Candy – Doja Cat. However, the video successfully garnered more than 7.5 million likes ad 10.9K comments.

In addition to flip, he also posts comedy sketches and pranks filled with creativity and has attracted lots of followers to his account. As of now, his TikTok account has garnered more than 8.7 million followers, with almost 261.7 million likes. Similarly, he reached the 1 million fan mark in June of 2019.

Furthermore, he is also popular on the photo-sharing platforms Instagram with the username @aydonholley. So far, the platform has 76 posts, with more than 250k followers to date. He shares his first photo on the platform back on June 25, 2017.

Speaking on Aydon Holley’s earnings, he is a social media influencer on TikTok who has made a quite considerable sum of money. He has not discussed his net worth, earnings, salary, etc. However, his earnings are assumed from his salary and income as a TikTok Star plus attainable promotions he has gained through his following on social media platforms. However, his main source of income is his social media activities.

Reflect on Aydon Holley’s relationship status, he seems to be dating. On June 15, 2017, he uploaded his first Instagram posts with She goes with the username @rileyyyjane on TikTok and @rileypetcosky on Instagram. 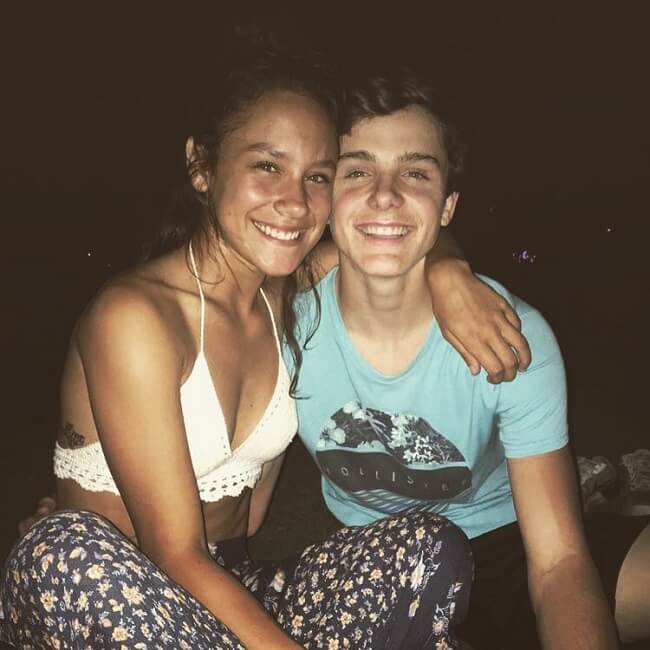 Caption: Aydon Holley posing for a photo with her girlfriend, Riley (Source: Instagram)

The duo looks very cute together.  Further, there is no news regarding his prior linkups. However, his good looks have attracted many girl fans toward him, and have a crush on him without a doubt.

Besides, this TikTok star has not involved himself with any sort of controversy and kept himself away from rumors as well. Conclusively, he has kept a good profile and is focusing more on his social media career right now.

The TikTok star Aydon stands a good tall height and fits body physiques. He stands at a height of 5 feet 6 inches tall. Besides, his weight is around 55 kg. He has got a lean body type. Other than that, his body statics like bicep size, shoe size, etc are all unavailable at the moment. He has a dashing look which reflects on his social media platforms. He has blue color eyes and brown hair color which suits his skin complexion.

Being a social media star, Aydon is active on several social media platforms like Instagram, TikTok,  Twitch, etc. On Instagram, he goes by the handle @aydonholley with almost 250k fan followers. His TikTok account has garnered more than 8.7 million followers, with almost 261.7 million likes. Likewise, he has 446 Followers on his Twitter account. He also has his merch.