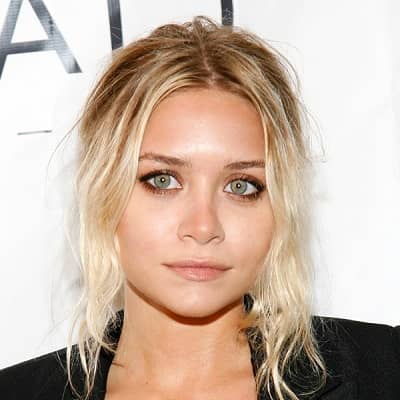 Ashley Olsen is a talented American fashion designer and former actress. Ashley Olsen appeared in a number of TV shows sharing the roles with her twin sister Mary-Kate Olsen.

Ashley Olsen was born on 13 June 1986 and she is 36 years old. She hails from Sherman Oaks, California, and her zodiac sign is Gemini. Likewise, her full name is Ashley Fuller Olsen.

Talking about her family, her parents are Jarnette “Jarnie” Olsen (née Jones) and David “Dave” Olsen. Likewise, she has five siblings namely Trent, Mary-Kate, Elizabeth, Taylor, and Jake. Taylor and Jake are her half-siblings from her father’s 2nd marriage. Whereas, Mary-Kate Olsen is her twin sister.

Later on, her parents divorced in the year 1996. Olsen has Norwegian ancestry whereas her mother is of French, German, and Italian ancestry. 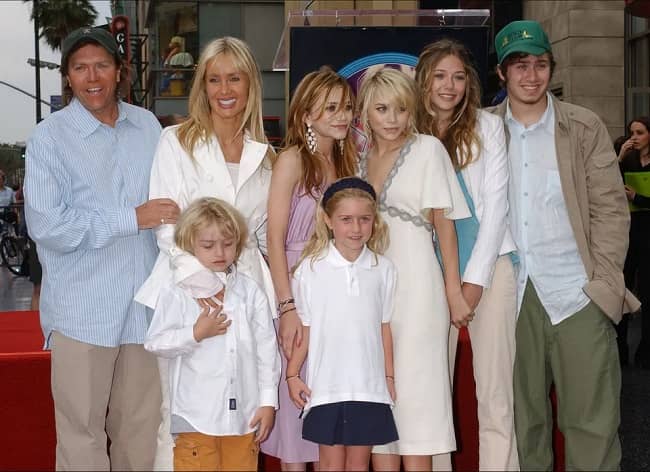 Caption: Ashley Olsen posing for a photo with all her siblings, father, and stepmother. Source: Huff Post

Regarding her education, this personality attended the Campbell Hall School in Los Angeles and graduated in 2004. She attended New York University’s Gallatin School of Individualized Study along with her twin sister Mary-Kate.

Professionally, Ashley Olsen is a popular fashion designer. Besides, she is also famous as a former actress who started acting at the age of 9 months. At such a young age, she shared the role of Michelle Tanner with her twin sister Mary-Kate Olsen in Full House from 1987 to 1995. The Olsen twins starred in numerous other films together.

Then in the year 1993, the production company Dualstar Entertainment Group produced a long string of TV movies and direct-to-video releases featuring the Olsen twins. As such, the twin appeared in Passport to Paris in 1999, Our Lips Are Sealed in 2000, Winning London and Holiday in the Sun in 2001, and So Little Time from 2001 to 2002.

Similarly, Ashley also starred in Getting There and When in Rome in 2002, and The Challenge and Charlie’s Angels: Full Throttle in 2003. The last film this former actress worked on with her twin sister was New York Minute in 2004 the year. Ashley then continued with her acting career independently and appeared in a few guest-star roles in films and in a music video. 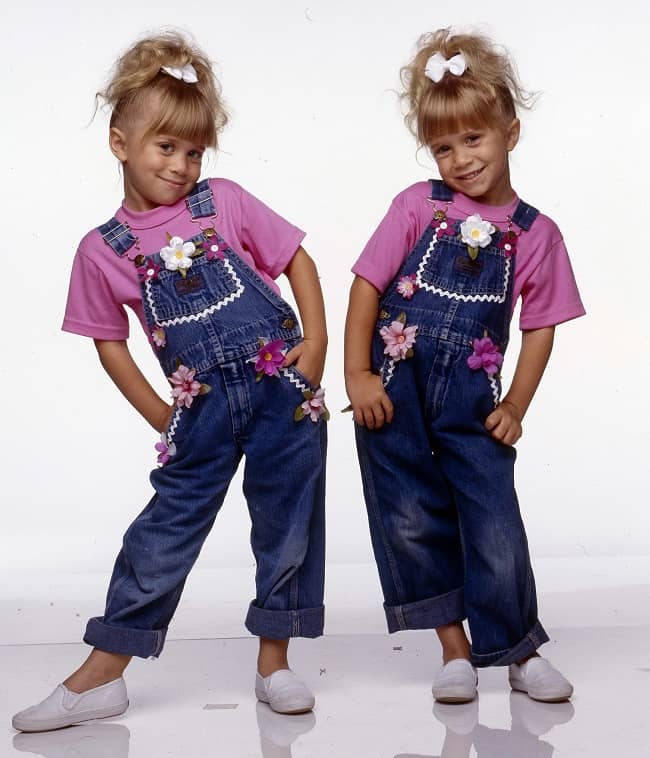 Caption: Ashley Olsen and her twin Mary-Kate posing for a photo while working on Full House. Source: Glamour

Further, in March 2012, both Mary-Kate and Ashley officially indicated their interest to retire as actresses. The reason behind this was the twins’ will to focus on their careers in the fashion industry. Further, the Olsen twins then co-founded luxury fashion brand – The Row. They also co-founded the lifestyle brand – Elizabeth and James – and more affordable fashion lines – Olsenboye and StyleMint.

Similarly, the twins also co-authored a book titled Influence. This book features interviews with fashion designers that have inspired the twins’ fashion lines. These interviewees are members of the Council of Fashion Designers of America.

In the year 2011, the Olsen twins collaborated with TOMS Shoes to design footwear for children without shoes in more than 20 countries worldwide. Further, the twins designed an Olsenboye change purse in the same year and donated the money to “Pennies From Heaven”. Likewise, in October 2012, the Olsen twins won the WSJ magazine Innovator of The Year Award.

Further, in early 2013, Ashley and her sister launched an Elizabeth and James perfume. Additionally, the Olsens are members of the Council of Fashion Designers of America, CFDA. The aforementioned is a not-for-profit trade association of over 450 prominent American fashion and accessory designers. The twins are now the creative directors for the Italian fashion shoe brand “Superga”. 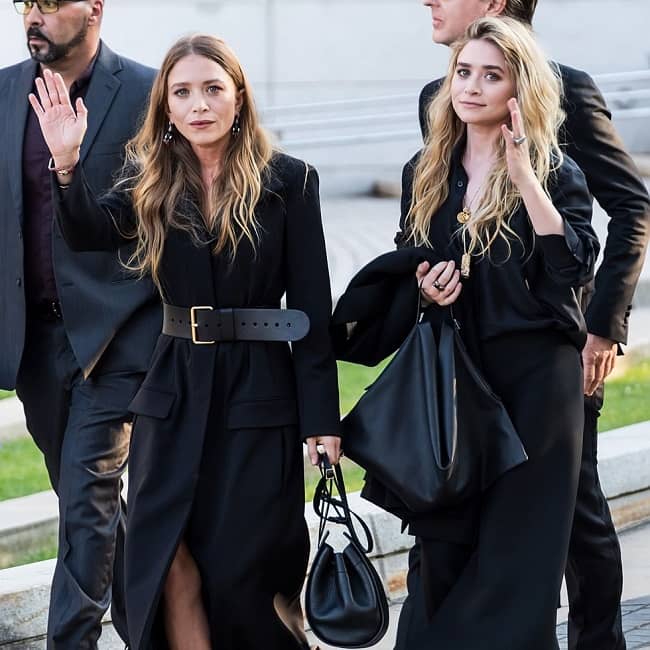 Caption: Ashley Olsen is on a shopping spree with her twin sister Mary-Kate. Source: Elle

Similarly, in 2007, Forbes ranked the Olsen twins as the 11th richest women in entertainment. The same platform also estimated their combined net worth at $100 million in 2007.

Furthermore, Forbes also included the Olsen twins on their 30 Under 30: All-Star Alumni list in the year 2017. As of 2022, Ashley alone’s net worth is estimated at around $250 million US dollars.

Ashley Olsen is in a romantic relationship with artist Louis Eisner. Eisner and Olsen have been dating each other since October 2017. Her lover is the son of Eric Eisner – former president of The Geffen Company and a noted philanthropist who founded the Young Eisner Scholars. In July 2019, this personality sparked engagement rumors after she was spotted wearing a ring on her finger. 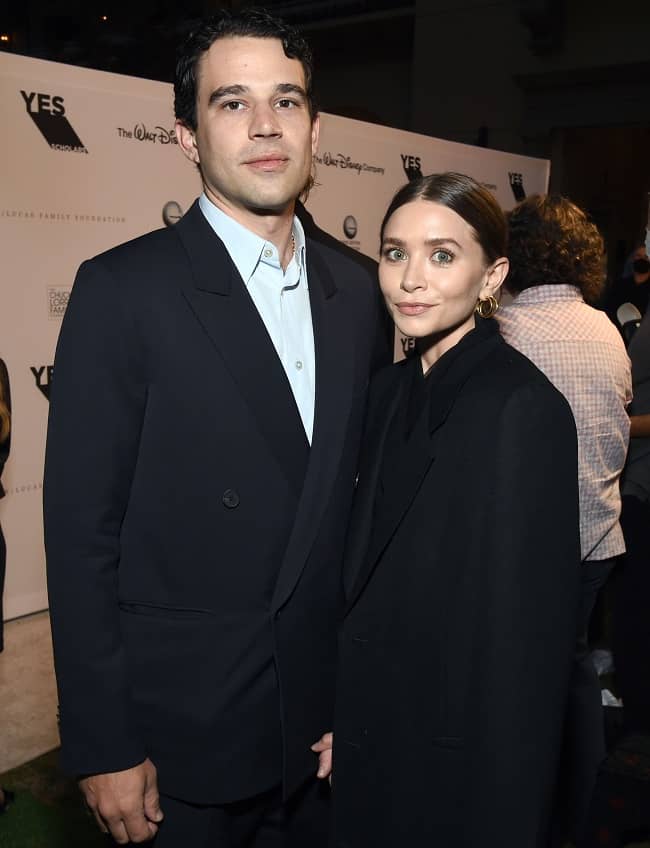 Caption: Ashley Olsen posing for a photo with her lover Louis Eisner at the charity event in Beverly Hills in September 2021. Source: Elle

Ashley Olsen stands tall at an approximate height of 5 feet 1 inch or 155 cm and her weight is around 54 kgs or 119 lbs. Similarly, Olsen’s chest-waist-hip measures are 34-24-35 inches respectively. Moreover, Ashley has mesmerizing green eyes and blonde hair.

Moving on, along with her sister, Ashley jointly ranked #3 on the VH1 program 100 Greatest Child Stars. Likewise, the Olsen twins’ success has been marked by their inclusion on every Forbes The Celebrity 100 list since the year 2002.