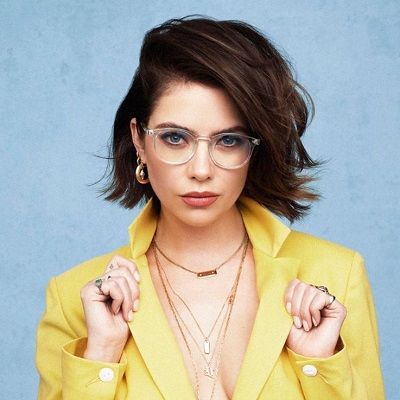 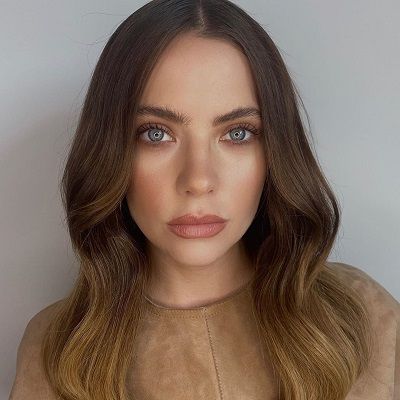 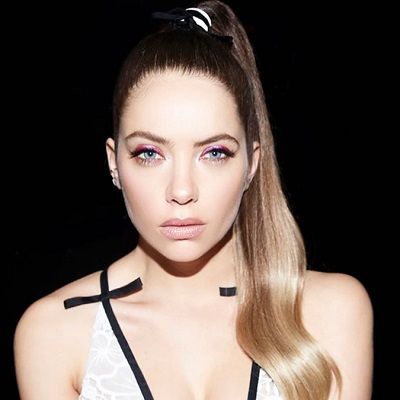 Ashley Benson is currently single. She was in a relationship with the English model and actress Cara Delevingne from May 2018 to April 2020. The lovers had been together for almost two years now. The duo confirmed their relationship only after a year of being together on June 14, 2019, via Cara’s Instagram post. Let’s have a look at the history of the lovers’ relationships from the very beginning.

Cara and she kept their relationship fairly private for a year before confirming it during Pride Month of 2019. The “Pretty Little Liars” star she and model and actress Cara Delevingne were dating for over a year although they did not publicly confirm their relationship until Pride 2019. 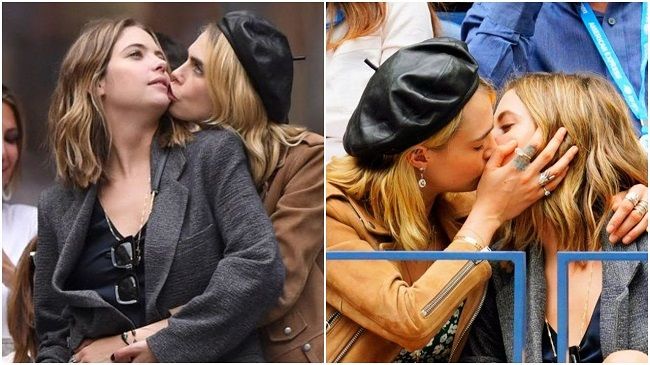 Caption: Ashley Benson and her lover Cara Delevingne are seen kissing in public at the U.S. Open. Source: Youtube

How did their relationship begin?

The duo started as co-stars while filming the punk-rock drama “Her Smell” in 2018. In June, Delevingne confirmed she was dating Benson and the two reportedly moved in together. They are no longer shy about posting each other’s pictures on their respective social media accounts.

In April 2018, the two began filming the movie ‘Her Smell’. It is a punk-rock drama that began filming in April 2018. It stars Delevingne, Benson, and Elisabeth Moss. On May 3, 2018, Benson posted her first Instagram photo with Delevingne with the caption, “After 50 tries…we got a blurry one @caradelevingne ???”.

The duo was photographed holding hands with each other in late May 2018. Pride magazine commented on the pictures, noting that one photo showed Delevingne hugging Benson and appearing to kiss her neck. Other photos showed the two holding hands.

Similarly, in early August 2018, some fans speculated that Benson was wearing jewelry with her and Delevingne’s initials on it. She posted an Instagram selfie that showed off some of her jewelry, including a necklace with the letters “C” and “A.” According to Page Six, some fans began speculating that the letters stood for “Cara” and “Ashley.” Moreover, on August 14, 2018, the two were photographed kissing at London’s Heathrow Airport. As per Daily Mail, the two were spotted kissing shortly after they arrived there together.

On 18th August, Benson attended Delevingne’s 26th birthday party. Delevingne’s star-studded party included a photo booth where Benson took photos with the model and some of their friends, including Suki Waterhouse and Zoe Kravitz.

That same month, Benson told People Now that she keeps her relationships private and wouldn’t confirm or deny if she was dating Delevingne. The “Pretty Little Liars” star said she wouldn’t confirm or deny the reports that she was dating Delevingne, but she did open up about how she tries to stay out of the public eye. She said:

“I think it’s the best way in any relationship. I’ve always been very private about them and I think it’s just better … I just kinda try to keep myself as private as possible.”

Additionally, in January 2019, the pair and some of their friends went to the Maldives. But the pair were spotted alone together a few times. Also, in February, Cara Delevingne visited her in Los Angeles where they were spotted getting lunch with friends and kissing.

Then in March, the two spent time in Paris together and with Delevingne’s sister. The duo was in Paris for Fashion Week and stylist Jamie Mizrahi, a friend of Benson’s, posted an Instagram of the cozied-up couple. She captioned the picture, “Post-show cuddle puddle.” That same day, Benson posted a photo of herself with Delevingne’s sister, Poppy, and Mizrahi.

Later in June, Cara Delevingne confirmed their relationship status. She mentioned that she and Benson were dating and the two reportedly moved in together. Cara captioned the post, “#PRIDE ?❤️??❤️? @ashleybenson”. It was a video clip from the “Her Smell” movie where she is kissing Ashley.

Later, Cara Delevingne told E! News why she wanted to go public with their relationship after a year of secrecy. She said:

“I don’t know, because it is Pride, it’s been 50 years since Stonewall happened and I don’t know. It’s been just about our one year anniversary so, why not?”

Cara also gave a speech at the TrevorLIVE Gala that seemed directed at Benson, who was also in attendance. She went on:

“I also have another very special woman in this room to thank and you know who you are. She’s one of the people who help me love myself when I needed it most and I really needed it. She showed me what real love is and how to accept it, which is a lot harder than I thought.”

That same month, Us Weekly reported that the pair had moved in together in Los Angeles, California and that she had sold her house to live with Delevingne. In late June, the now-confirmed couple was photographed attending actress Zoe Kravitz and Karl Glusman’s rehearsal dinner and wedding in Paris, France.

Additionally, in July, people noticed that she had a ‘CD’ tattoo and that Delevingne had an ‘A’ inked in the same spot. Although it’s not clear what the tattoo stands for or when she got it, many fans point out that “CD” could stand for Cara Delevingne’s initials. Similarly, Cara Delevingne also has the letter “A” tattooed in the same spot that she has “CD”. It could stand for “Ashley,” although it’s also unclear when she got the ink and what it stands for.

On October 14, 2019, Delevingne received the 2019 Girl Up #GirlHero award for her advocacy for the LGBTQ community. Cara also said she is the ‘luckiest girl in the world’ because she has Benson in her life during her speech.

On Valentine’s Day 2020, Cara shared a photo of the lovers kissing and captioned it, “A kiss with a cause. This Valentine’s Day when you share a photo of you and a loved one— a significant other, a friend, a pet—you can also raise awareness and help create a future with more survivors thanks to the @su2c #KissCancerGoodbye campaign.”

In a rare public appearance, the couple arrived at the fall 2020 Boss show at Milan Fashion Week. During the show, they sat in the front row. In March, Delevingne shared a video of her and Benson recreating a scene from ‘Keeping Up With the Kardashians’.

Talking about her childhood, she was born two months early weighing 2 pounds 8 oz. She was in ICU for a month and the hospital told her parents would need heart surgery on Christmas Day. Her parents went on Christmas Day and the doctors said that her heart had closed up. Then she never needed any surgeries. She was released to go home at 4 1/2 pounds after being hospitalized for two months. And, she has been healthy ever since.

Similarly, she has also been involved in competitive since she was 2 with hip hop, jazz, ballet, tap, and lyrical. Likewise, she has been singing since she was about 5 and she hopes to pursue that, along with her acting. She began modeling at the age of 5 for dance catalogs. The Ford Modeling Agency then pursued her at the age of 8.

She worked steadily in print and is still with the Agency. At the age of 10, she wanted to pursue acting. She then went on to do 35 commercials, and then on to theatrical roles. Acting was now her passion. She put all her focus into acting, which left little time for modeling and dancing, anymore. 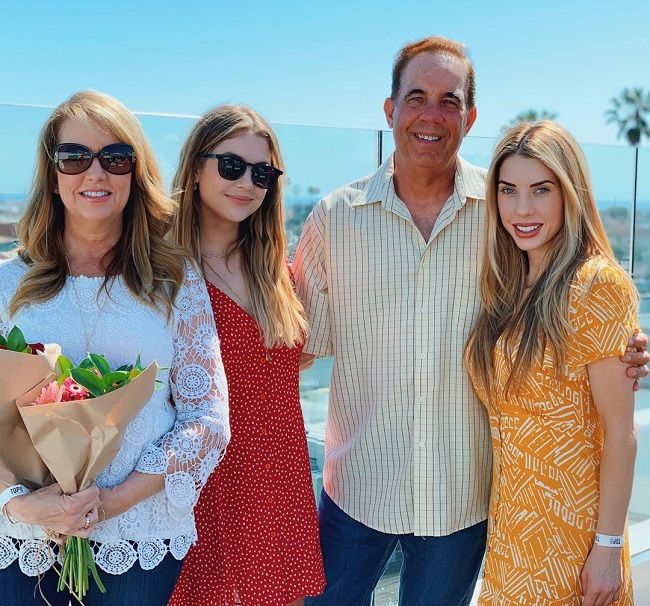 Caption: Ashley Benson was photographed with her family. Source: Instagram

Though she is most popular for the television series ‘Pretty Little Liars’ wherein she plays the role of Hanna Marin, she first came to the limelight with the NBC soap opera ‘Days of Our Lives as Abigail Deveraux. Her inherent talent in acting and drama is visible in her work which reaffirms her artistic skills. Television apart, Benson’s popularity and fame grew by leaps and bounds with her films, the 2012 crime thriller ‘Spring Breakers’ and the 2015 horror drama ‘Ratter.’

She also had a cameo role in Romeo Miller (aka Lil Romeo) and Solange’s music video for the song “True Love”. She did a photo shoot with Britney Spears for Vogue Magazine. Similarly, she is in NLT’s music video, “That Girl”.

Ashley received nominations several times at various award shows. She has won a total of six awards among them all. All of them are for her role in the TV series Pretty Little Liars. They are:

Moving on to her net worth and earnings, her acting career and other public appearances heavily influence her earnings. At present, her net worth estimation is around $6 million U.S. dollars.

The American actress stands tall at a height of 1.65 m, i.e. 5’5″ and weighs around 54 kgs. Ashley’s chest-waist-hip body measurements are 35-24-34 inches and she wears a bra size of 34B. Moreover, she wears a shoe size of 8 and the dress is size 6, both as per the U.S. standards. Additionally, she has beautiful blue eyes and blonde hair. 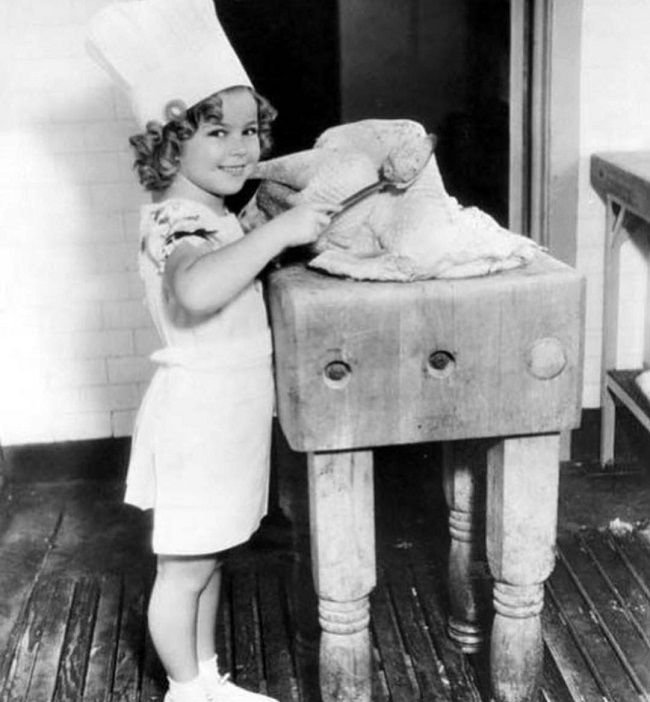