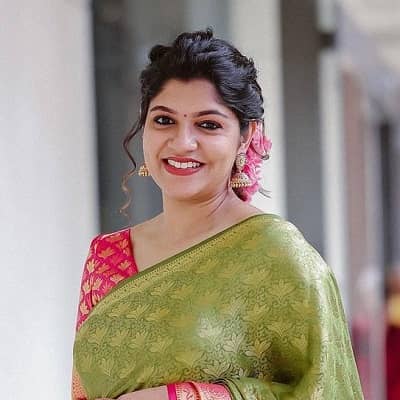 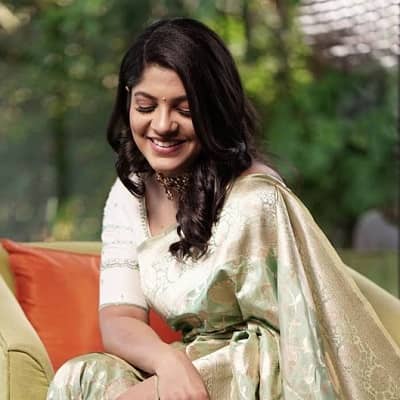 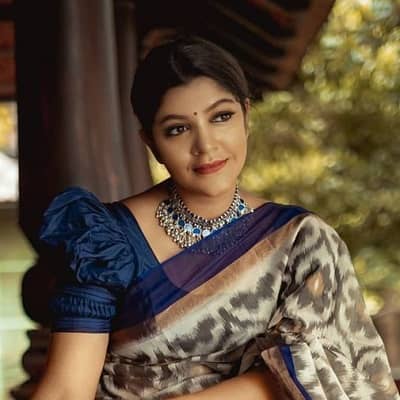 Aparna Balamurali was born on 11 September 1995 and she is currently 25 years old. She hails from Thrissur, Kerala, India, and her zodiac sign is Virgo.  Talking about her family, Aparna’s parents are mother Sobha Balamurali and father K. P. Balamurali.

Likewise, Aparna’s father is a music director whereas her mother is a lawyer. Aparna’s father has composed several musical albums while her mother has also worked as a playback singer in some Malayalam films. Further, Aparna also has a paternal link with popular singer-composer K. P. Udayabhanu as a great-uncle.

Moreover, Aparna is well trained in Indian classical music and classical dance styles. Some dance styles that Aparna is excellent in includes Bharatanatyam, Mohiniyattam, and Kuchipudi. Regarding her educational journey, Aparna studied architecture at the Global Institute of Architecture. This institution is located in Palakkad. 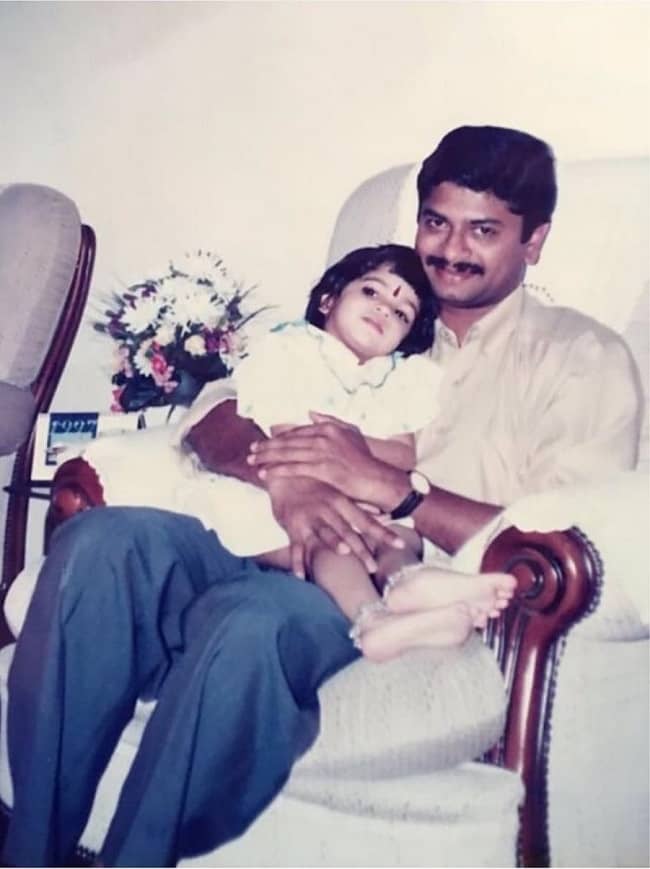 Caption: Aparna Balamurali in a childhood photograph with her father. Source: Instagram

Professionally, Aparna Balamurali is a famous actress as well as a playback singer. The actress mainly works in Malayalam and Tamil cinema. Likewise, the actress is also famous for her roles in Maheshinte Prathikaaram, Sunday Holiday, and Soorarai Pottru among others.

Talking about the beginning of her career in the entertainment industry, Aparna started off at the young age of 18 years. The actress is most popular for her work in Malayalam and Tamil film industry. The young actress made her acting debut in the Malayalam film Yathra Thudarunnu. It was back in the year 2013. For this project, Aparna worked alongside Lakshmi Gopalaswamy and director Jayan Sivapuram.

Then in the year 2015, Aparna worked on her second project, i.e. movie Oru Second Class Yathra. Aparna gained immense fame with the film Maheshinte Prathikaaram in the year 2016. The actress then starred in Oru Muthassi Gada the same year. 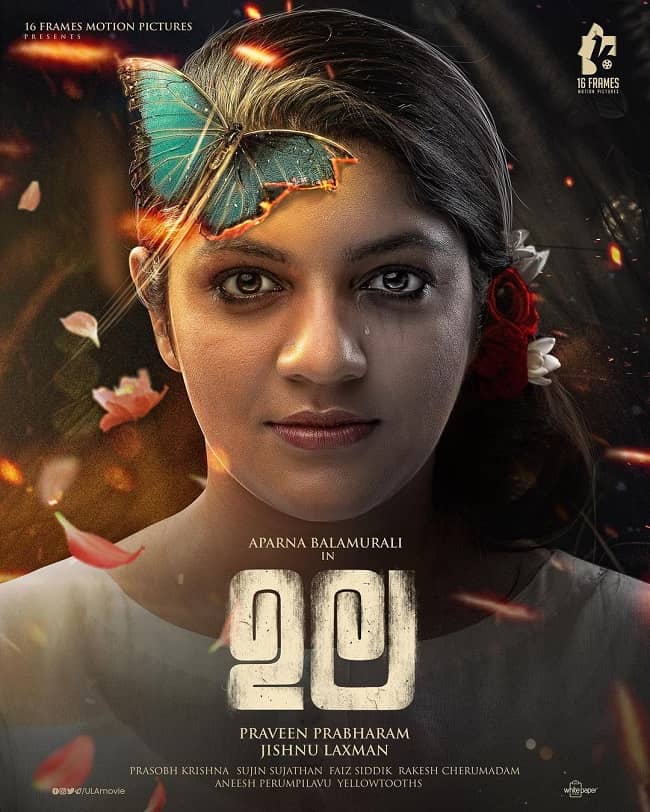 Caption: Aparna Balamurali on the poster of the film ‘ULA’. Source: Instagram

Moreover, Aparna made her Tamil debut with the film 8 Thottakkal in the year 2017. The actress starred in Sunday Holiday and Thrissivaperoor Kliptham the same year. In both of these aforementioned films, Aparna worked alongside the lead actor Asif Ali.

Besides her career in acting, Aparna also has a successful career in music. Some of her songs include Mounangal Mindumoree, Thennal Nilavinte, and Thanthane. In the year 2018, Aparna released songs including Kamuki and B. Tech.

Additionally, Aparna is also a Tamil film’s heroine in Sarvam Thaala Mayam in which she appeared alongside actor G. V. Prakash Kumar. Similarly, in the year 2019, Aparna worked on Malayalam films including Mr. & Ms. Rowdy and Jeem Boom Bhaa. Then in the project Soorarai Pottru, Aparna played the role of Bommi. The actress’s next Tamil movie is Theethum Nandrum released recently in 2021.

Aparna Balamurali is most probably single at present. The Indian actress has yet to share insights into her love life and affairs. The actress also has yet to shares any details on her social media regarding this matter. Nevertheless, when the time is right, Aparna is sure to attract many lovers through her beauty, charm, and talent.

Aparna Balamurali stands tall at an approximate height of 162 cm or 5 feet 4 inches and her weight is around 52 kgs or 114 lbs. Likewise, Aparna has a chest-waist-hip measurement of around 34-28-36 inches respectively. Further, the actress has dark hair and eyes of the same color. 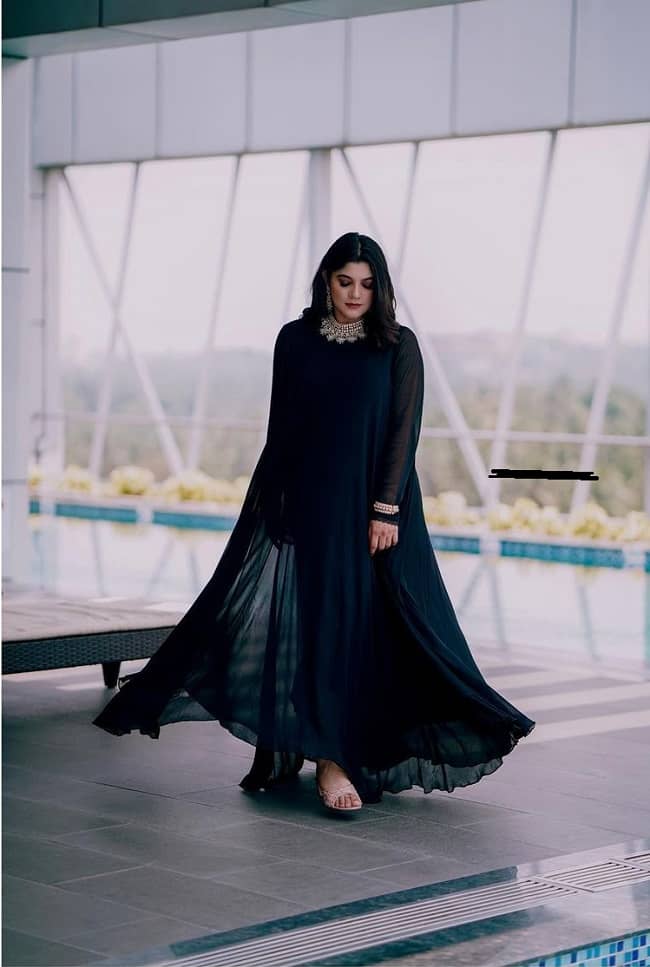 Caption: Aparna Balamurali posing for a photo in a beautiful dress. Source: Instagram

Talking about her social media presence, Aparna Balamurali joined Twitter in August 2016 and so far has over 82.2K followers on her @aparnabala2. Likewise, Aparna is available on Instagram under the username @aparna.balamurali. So far, this account has accumulated over 1.3 million followers. Moving on, Aparna has a net worth estimation of approximately $1 million to $5 million US dollars.