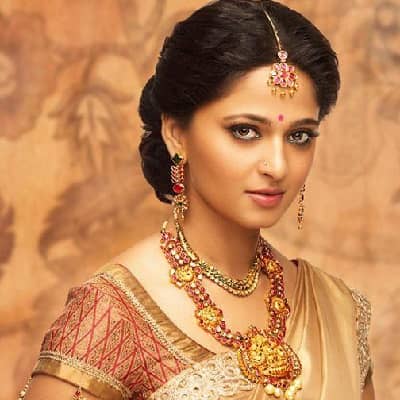 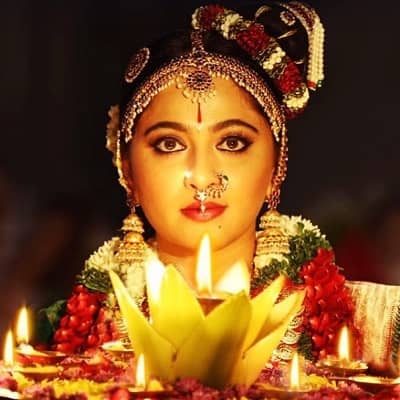 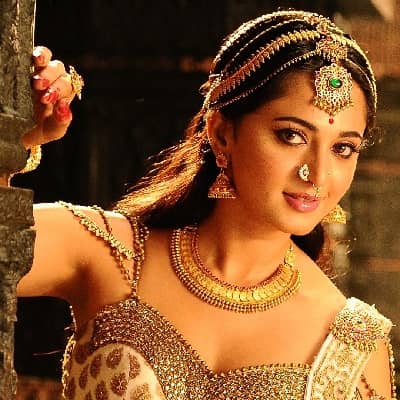 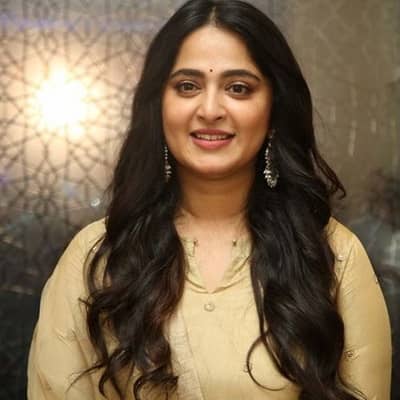 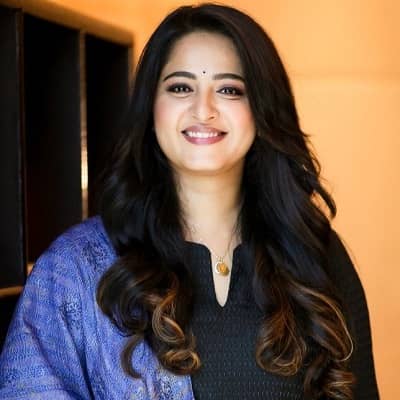 Anushka Shetty is an Indian actress and model. Anushka Shetty mostly stars in the Telugu and Tamil film industries. Moreover, she is famous for starring as ‘Princess Devasena’ in the Baahubali series.

Anushka Shetty’s real birth name is Sweety Shetty. She came to this world on 7 November 1981. She originally hails from Mangalore, Karnataka, India. Anushka is 39 years old as of now and her zodiac sign is Scorpio. Moreover, she is an ethnic Tuluva. Her parents are Prafulla Shetty (mother) and A. N. Vittal Shetty (father). Similarly, she also has two elder brothers namely Gunaranjan Shetty and Sai Ramesh Shetty.

Talking about her educational journey, she gained her Bachelor of Computer Applications from ‘Mount Carmel College’ in Bangalore. Anushka was also a yoga instructor, trained under Bharat Thakur. Additionally, she fluently speaks Kannada, Hindi, Tamil, Telugu, and English languages. 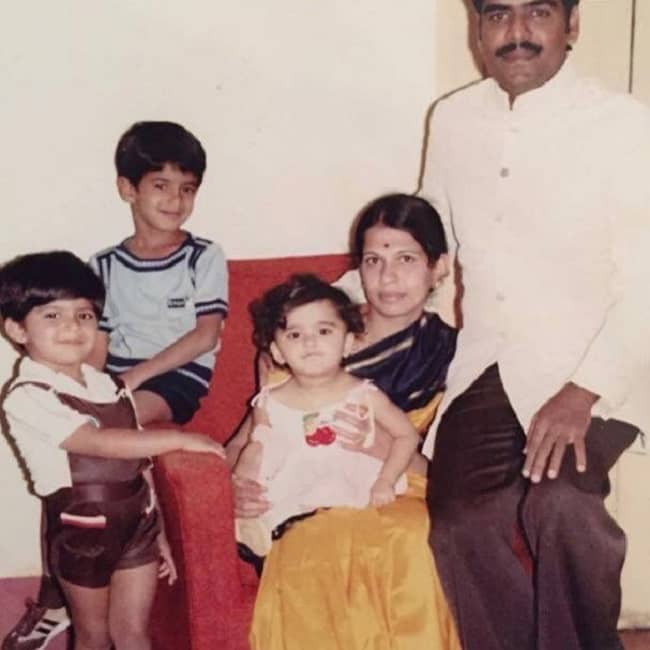 Anushka has received many accolades, including 3 CineMAA Awards, a Nandi Award, TN State Film Awards. And, also three Filmfare Awards from eight nominations. She has appeared in over 50 films and is one of the highest-paid actresses in India. Moreover, she is popularly known as the Lady Superstar of South Indian cinema. She and Nagarjuna have been good on-screen pairs for the past few years.

In the year 2009, she played dual roles in the Telugu dark fantasy film ‘Arundhati’. And, it garnered her critical acclaim and several awards, including her first Filmfare Award for Best Actress- Telugu, Nandi Award, Cinema Award for Best Actress. Similarly, in the following year, her portrayal of a prostitute in the acclaimed drama ‘Vedam’ won her a second consecutive Best Actress Award from ‘Filmfare and CineMaa Award.’

And, following the success of a series of films, she established herself as one of the leading actresses of Telugu cinema. In the 2010s, she achieved success in Tamil cinema with starring roles in the action films like ‘Vettaikaran (2009)’, ‘Singam (2010)’, ‘Singam II (2013)’, and ‘Yennai Arindhaal (2015)’. All of the movies were major commercial successes.

Anushka continued to draw praise from critics with her leading performances in the dramas ‘Vaanam (2011)’, ‘Deiva Thirumagal (2011)’, and ‘Size Zero (2015)’. She also portrayed the titular Queen in the 2015 epic historical fiction ‘Rudramadevi’. It won her the third Filmfare Award for Best Actress- Telugu. Similarly, her role as Princess Devasena in the Baahubali series (2015–17) gained widespread acclaim.

Moreover, while ‘Baahubali: The Beginning (2015)’ is the 7th highest-grossing Indian film, its sequel ‘Baahubali: The Conclusion (2017)’ is the second highest-grossing Indian film of all time. Also, it made her the highest-paid actress in South Indian Cinema. Moreover, in the Telugu horror-thriller film ‘Bhaagamathie (2018)’, she played the character Chanchala, an IAS officer. Therefore, her portrayal of Bhaagamathie and Chanchala was notable. 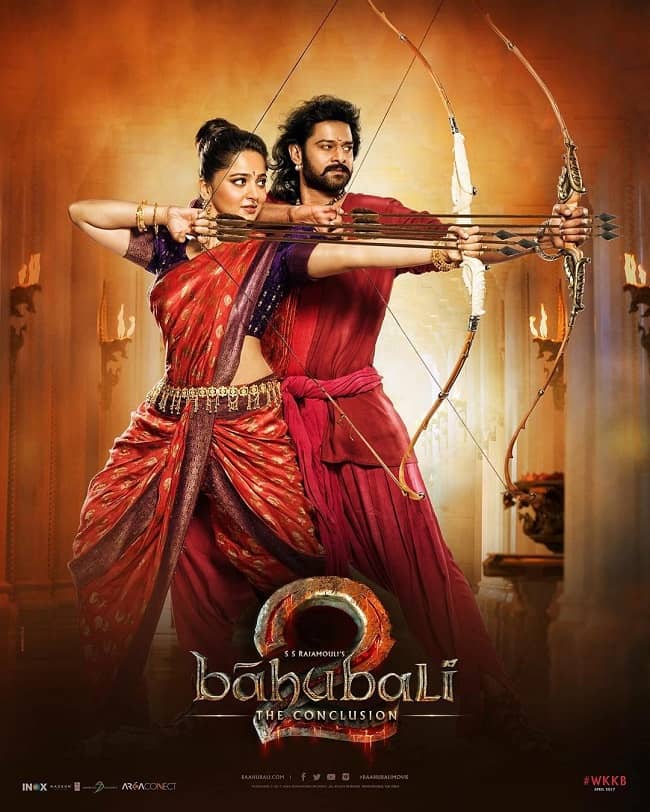 Caption: Anushka Shetty and Prabhas in the poster of ‘Baahubali 2’. Source: Instagram

Anushka was rumored to be dating director, Krish. Therefore, she was also rumored to date Baahubali’s main actor, Prabhas. But, both Prabhas and Anushka denied the news and it came to a full stop. However, as per some sources, she is believed to marry director, Prakash Kovelamudi. Sadly, there is no much information related to her personal life. She has kept her personal life away from the media’s attention.

Anushka is one of the prettiest and gorgeous actresses. She is 5 feet 10 inches tall and has a weight of 62 kilos. Similarly, she has a stunning body figure. Therefore, she maintains her body physique through yoga and exercise. However, she has a measurement of 34-28-34 inches including chest, waist, and hip respectively. Further, she has a set of dark brown eyes and her hair is of black color. 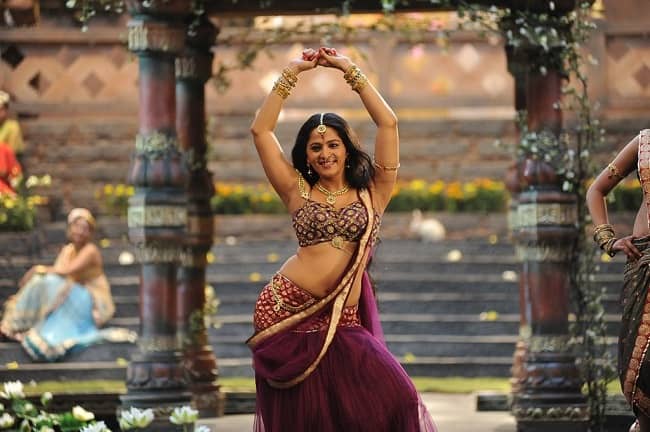 Anushka is a famous and notable actress who has a good sum of income. Therefore, she has a net worth of $5 million as of 2021.