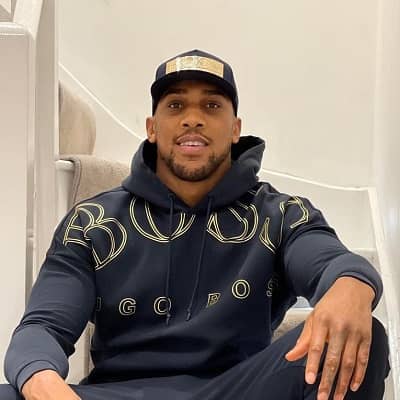 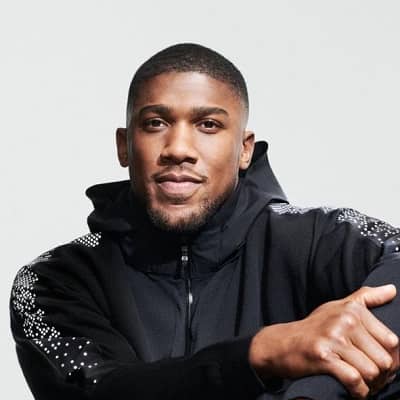 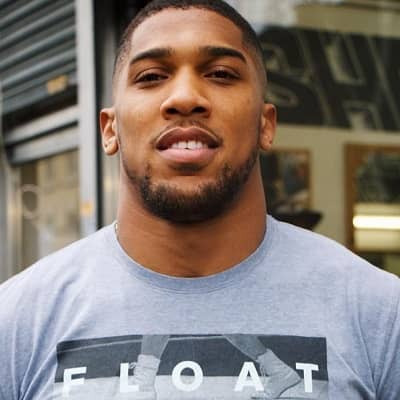 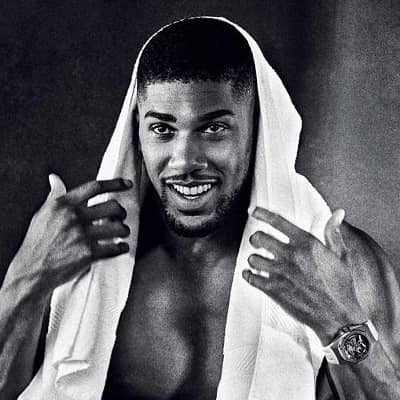 Anthony Joshua was born on 15 October 1989 and he is currently 32 years old. He hails from Watford, Hertfordshire, England, and his zodiac sign is Libra. Likewise, his full name is Anthony Oluwafemi Olaseni Joshua. Talking about his family, his parents are his mother Yeta, and father Robert Joshua.

Moreover, his mother is Nigerian whereas his father is of Nigerian and Irish ancestry. His Nigerian background is traced back to the Yoruba people. HI’s cousin is Ben Ileyemi and Ben is also a professional boxer. The cousin duo made their professional debuts together in the year 2013. 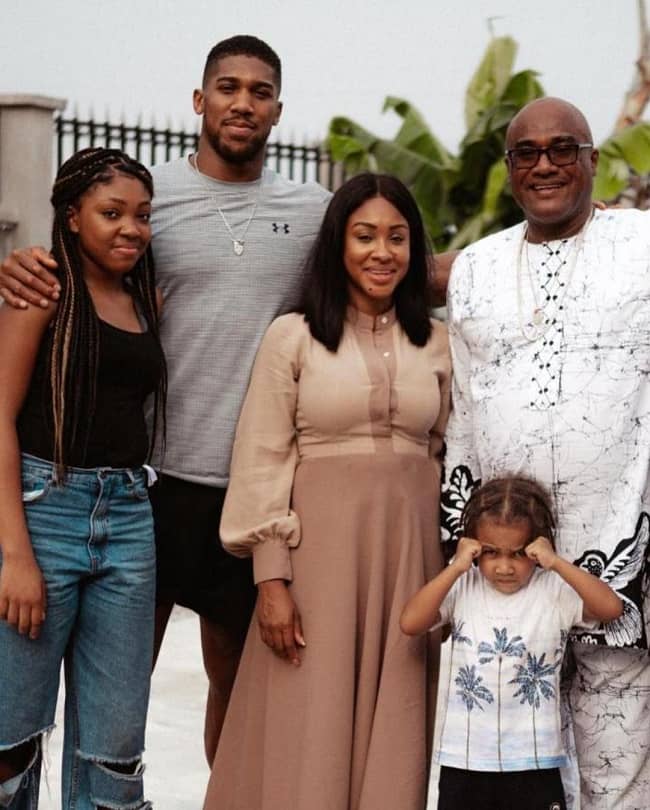 Caption: Anthony Joshua posing for a photo with his family. Source: Instagram

Similarly, he spent some of his early years in Nigeria. There, he was a boarding school student at Mayflower School in Ikenne. Unfortunately, his parents divorced when he was 12 years old. Following this incident in his life, he returned to the UK. Young, he left for the United Kingdom halfway through Year Seven and he later joined Kings Langley Secondary School.

He then grew up in the Meriden Estate in Garston, Hertfordshire. His friends and former teachers called him “Femi”. It was derived from his middle name, Oluwafemi. He additionally excelled at football and athletics. He also broke his school’s Year Nine 100 m record with a time of 11.6 seconds.

Moving on, he has a net worth of around $60 million US dollars.

Professionally, Anthony Joshua is a professional boxer. The boxer is a two-time unified world heavyweight champion. He is also the winner of WBA (Super), WBO, IBF, and IBO titles. He has held these titles since December 2019. Prior to this, he also held these titles between 2016 and June 2019. At the regional level, from 2015 to 2016, he won the British and Commonwealth heavyweight titles. 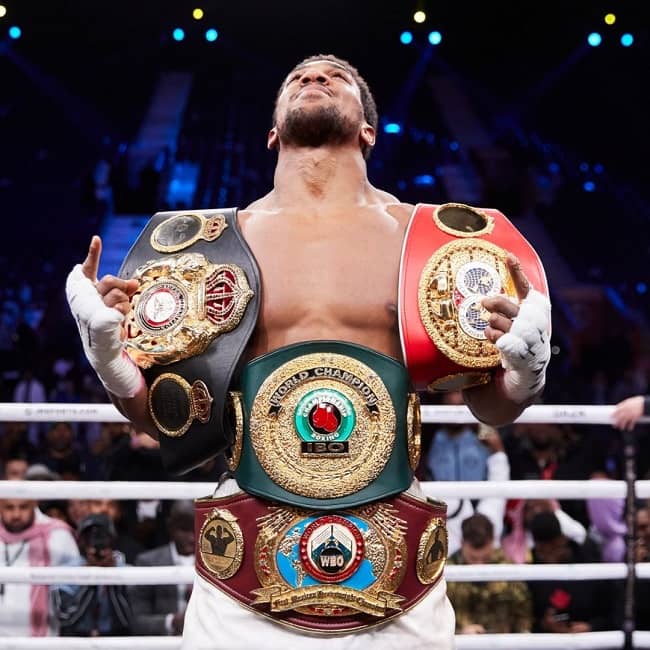 Likewise, he represented England during his amateur years. It was at the 2011 World Championships in the super-heavyweight division. At this event, he won a silver medal. He also represented Great Britain at the 2012 Olympics where he won gold.

In the year 2014, the Ring magazine named Anthony “Prospect of the Year”. This was only a year after turning professional. Then in 2017, he had a victorious fight against Wladimir Klitschko. After this fight, The Ring and the Boxing Writers Association of America named Anthony “Fight of the Year”.

Moreover, Joshua is the second British boxer, after James DeGale, to win both a gold medal at the Olympics and a world title by a major professional sanctioning body, as well as the first British heavyweight to do so. 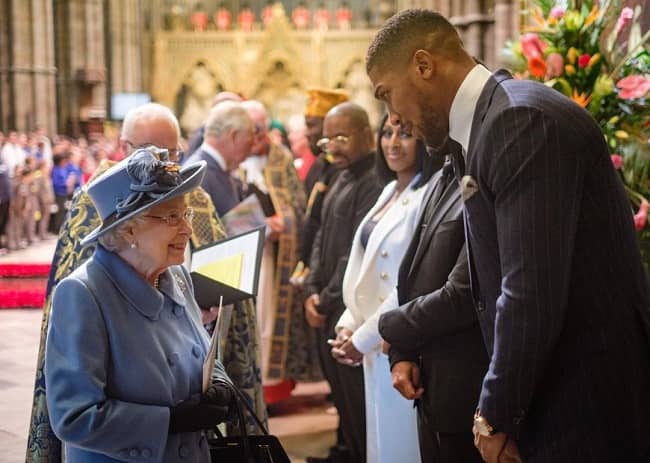 Caption: Anthony Joshua was captured during his interaction with Queen Elizabeth. Source: Instagram

Furthermore, BoxRec has ranked him among the world’s top 10 heavyweights since the year 2014. He was also ranked #1 at the conclusion of 2016 and 2017. The boxer’s knockout percentage stands at 93% (80% in world heavyweight title fights). 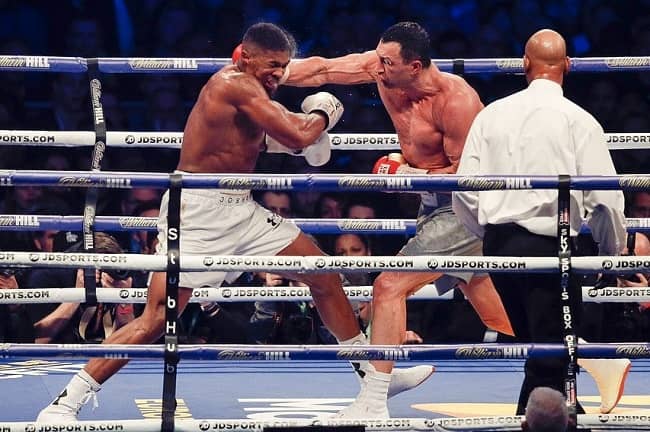 The boxer was a bricklayer before taking up boxing full-time. In the year 2009, he went to remand in Reading Prison. The boxer had to wear an electronic tag on his ankle when released. Then in March 2011, the police pulled him over for speeding in Colindale, North London.

The police found a sports bag with eight ounces (226.8 grams) of herbal cannabis hidden in his Mercedes-Benz. Subsequently, he was charged with possession with intent to supply a class B drug. This is an offense that carries a maximum 14-year sentence. The boxer was subsequently suspended from the GB Boxing squad. He was also sentenced to a 12-month community order and 100 hours’ unpaid work after pleading guilty at crown court.

In July 2014, he named Muhammad Ali, Mike Tyson, Evander Holyfield, Larry Holmes, and Lennox Lewis as his top five greatest heavyweight boxers of all time in an interview with iFL TV. Similarly, he also spoke about his positive relationship with his longtime promoter Eddie Hearn in 2020.

Anthony Joshua became a father in the year 2015 with a son named Joseph “JJ” Joshua. The mother of his son is the dance teacher Nicole Osbourne. As of now, he seems to be single currently. 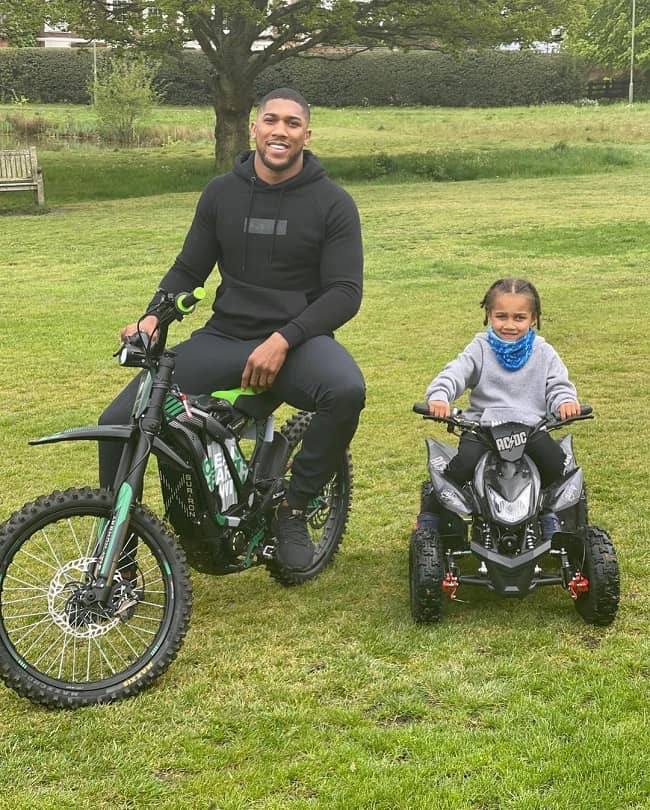 Anthony Joshua stands tall at an approximate height of 1.98 meters or 6 feet 6 inches and his weight is around 108 kg. Other than this, there is no information regarding his other body measurement details. Moreover, he has dark brown eyes and hair of the same color.

Likewise, the boxer created his official “Anthony Joshua” Youtube channel on April 21, 2017. So far, this channel has over 88.7 million views and 730K subscribers. He also has more than 7.1 million followers on his Facebook page.