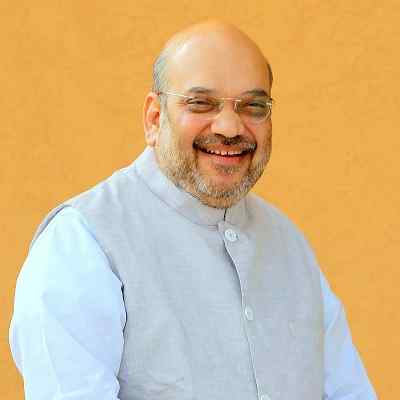 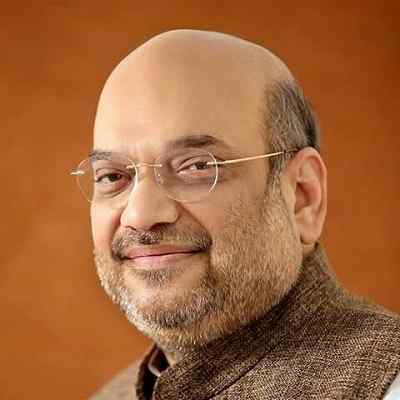 Amit Shah is an Indian Politician. Amit Shah is notable as a longtime member of the Gujarat Legislative Assembly of India. He even served as president of his country’s Bharatiya Janata Party. At present, he is serving as the Minister of Home Affairs.

Amit Shah was born in Mumbai, Maharashtra, India, on October 22, 1964. He is 56 years old and is under the zodiac sign, Libra. Amit holds Indian nationality. He grew up in a Gujarati Hindu Vaishnava family, who were Baniyas. His hometown is in Mehsana, Gujarat, India. And, his full name is Amitbhai Anilchandra Shah.

His father’s name is Anilchandra Shah and his mother’s name is Kusumben Shah. He has six sisters and two of them live in Chicago. His mother passed away from an illness on 8 June 2010. Amit’s father is a businessman from Mansa who owned a successful PVC pipe business. Likewise, Shah’sgreat grandfather was the Nagarseth (Capital city chief) of the small state of Mansa. Any other information regarding Amit’s parents as well as his family members is not available at the moment.

Regarding Amit’s educational background and qualification, she attended a local school in Mehsana, Gujarat, India. Then he moved to Ahmedabad from Gujarat to be able to study biochemistry at CU Shah Science College. Amit graduated with a BSc degree in biochemistry and then began working for his father’s business. Likewise, he even worked as a stockbroker and in co-operative banks in Ahmedabad.

Amit Shah became involved with the Rashtriya Swayamsevak Sangh (RSS) since his childhood. He was part of the neighborhood shakhas (branches) as a boy. Formally he became an RSS swayamsevak (volunteer) in Ahmedabad during his college days. Amit Shah and Narendra Modi first met each other in the year 1982 through the Ahmedabad RSS circles. And, at that time, Modi was an RSS pracharak (propagator), working in in-charge of youth activities in the city.

Amit Shah began his political career in the year 1983 as a leader of the student wing of the RSS. It is the Akhil Bharatiya Vidyarthi Parishad. He was able to join BJP in the year 1987, one year before Modi joined the party. He was able to become an activist of the BJP’s youth wing, Bharatiya Janata Yuva Morcha (BJYM), in the year 1987. Gradually Amit Shah rose in the BJYM hierarchy. He was able to hold various posts such as ward secretary, taluka secretary, state secretary, vice-president, and general secretary. And, he became popular and known for his management skills when he was the election campaign manager for Lal Krishna Advani in Gandhinagar during the 1991 Lok Sabha elections.

The BJP formed its first government in Gujarat in the year 1995, with Keshubhai Patel as Chief Minister. Narendra Modi and Amit Shah worked together to eliminate Congress in the rural areas. And, the duo’s strategy was to find the second-most influential leader in every village and convinced them to join the BJP. Likewise, they used the same strategy to reduce Congress’s influence over the state’s powerful co-operatives, which played an important role in the state’s economy. Amit Shah was elected as the president of the Ahmedabad District Cooperative Bank (ADCB) which is the biggest cooperative bank in India in the year 1999.

Despite not belonging to Patels, Gaderias, and Kshatriyas castes which had traditionally been controlling the co-operative banks, Amit Shah won the election. During that time, the bank was on the verge of collapse and Shah was able to turn around the bank’s fortune within a year. Likewise, Modi along with Amit Shah even sought to reduce Congress’ hold over sports bodies in the state. Amit was able to serve as the president of the Gujarat State Chess Association. Moreover, in the year 2009, he became the vice-president of the profitable Gujarat Cricket Association (GCA). Then in the year 2014, after Modi became Prime Minister of India, he became the president of GCA.

Narendra Modi used his influence to get bigger roles for Amit Shah. He was able to convince Patel to appoint Amit Shah as the chairman of the Gujarat State Financial Corporation. It is a public sector financial institution that finances small and medium-scale enterprises. In the year 1997, Modi lobbied to get Amit a BJP ticket for the Gujarat Legislative Assembly by-election in Sarkhej. Amit Shah then was able to become an MLA after winning the by-election in February 1997. And he retained his seat in the 1998 Assembly elections. 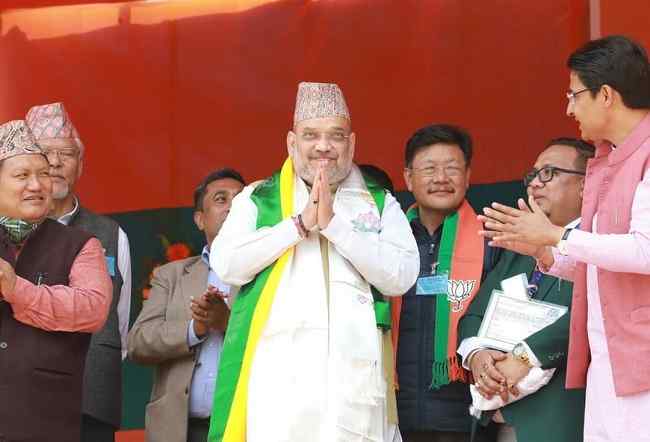 Given Amit Shah’s wide experience as well as commendable success, he became the national convener of BJP’s cooperative committee in the year 2001. Then, in the year 2002, as a prelude to the assembly elections, he became the co-organizer of the “Gaurav Yatra”. The party stomped into power in the state under Chief Minister Shri. Narendra Modi and this time too, Amit Shah was able to win his seat from the Sarkhej constituency for the third time in a row.

Likewise, Amit Shah got the key ministries of Home, Transport, and Prohibition, and his work as Gujarat Home Minister was much appreciated. And, his popularity and connection with people increased with time. In the year 2007, the Sarkhej electorate again showered its blessings on Amit Shah with a victory and he returned to the state cabinet. Moreover, he got responsibility for a number of key portfolios such as Home, Transport, Prohibition, Parliamentary Affairs, Law, as well as Excise.

Moreover, Amit Shah won his fifth straight victory from the newly carved Narayanpura assembly segment in the year 2012. And, the party even recognized his electoral talent, and in the year 2013 when he became General Secretary of the BJP. This time and position was a high point in his long as well as arduous political journey.

The BJP recognized and acknowledged the commitment, hard work, and organizational capabilities of Amit Shah. So, they made him the President of the party in the year 2014. And, in less than one year of taking over as BJP’s National President, he traveled to each and every state in the country to push the party’s ideology and enlarge party membership. He was able to make BJP the world’s largest political party with over 10 crore members. And, one of the programs was “Mahasampark Abhiyan” which aimed at engaging newly acquired members in party programs.

The combination of PM Modi’s leadership along with Amit Shah’s well-crafted election strategies resulted in BJP winning four of the five assembly elections held during the first year of his tenure as party president. Despite the hectic schedule and numerous public engagements, he loves to unwind by listening to classical music, playing chess, and watching a game of cricket. He has a keen interest in stage performances as well. 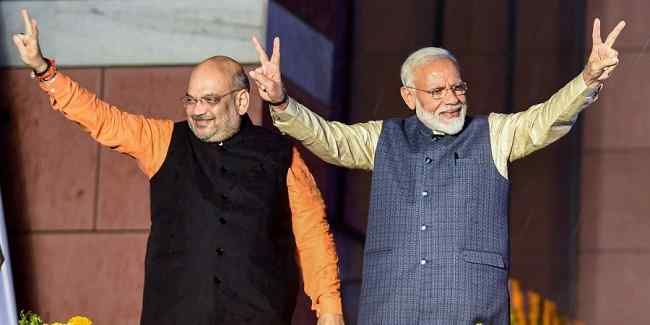 The UPA government under Congress slapped charges of a fake encounter against Amit Shah in the year 2010. He was imprisoned. Later on, his innocence was vindicated when the Gujarat High Court observed that there was no prima facie case against him. A special CBI Court even absolved Amit Shah of all charges on the ground that the case was “politically motivated”.

In the same year, he was accused of having orchestrated the extrajudicial killings of Sohrabuddin Sheikh. However, he was effectively discharged from the Sohrabuddin case by a special CBI court noting a lack of evidence and political undertones to the accusations in the year 2014. Amit Shah has also been accused of having ordered illegal surveillance on a woman in 2009 during his tenure as a home minister in the year 2013.

Amit Shah tied the knot with Sonal Shah. The couple has a son whose name is Jay Shah. The exact date of their marriage is not available at the moment. However, the duo seems to be very happy together and is pretty much in love. Talking about Amit’s past relationships, no information has come forward. 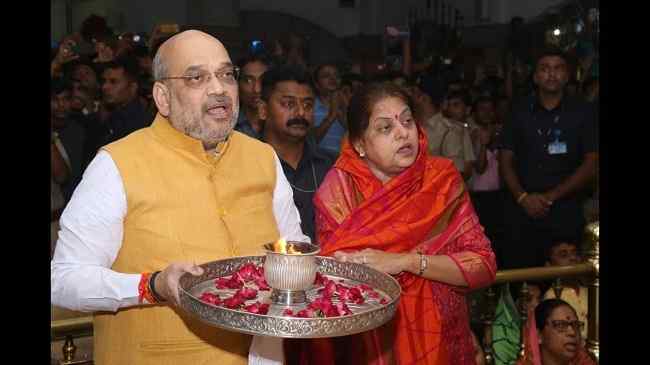 Amit Shah was operated on for lipoma at the backside of his neck in September 2019. And, on August 2, 2020, he tested positive for COVID-19 and admitted to the hospital.

Amit Shah has a height of 5 feet 6 inches whereas his weight is 90 Kg. Focusing on Shah’s other body measurements such as his chest size, waist size, and bicep size, their sizes are 40-33-12 inches respectively. Moreover, Amit has dark brown eyes and white hair now as he has gotten older.

According to caknowledge, Amit Shah has a net worth of $5.5 million. And his main income source is his career of being a politician.