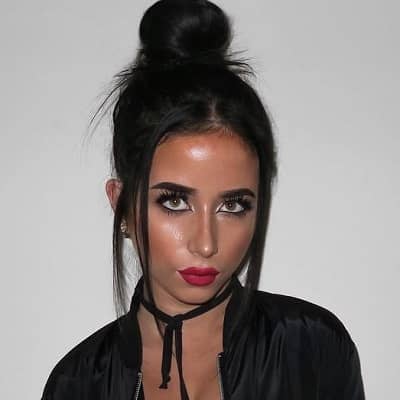 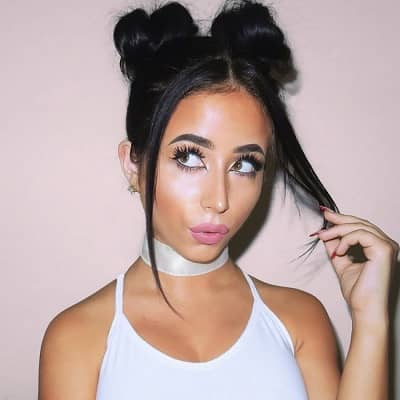 Amber Scholl is 28 years old. Her full name is Amber Brittany Scholl. She was born on August 13, 1993, in Los Angeles, California which makes her an astrological sign of Leo.

Similarly, she has two younger siblings and the eldest of three daughters named Alyssa and Angela. She has featured both of her sisters in the sister’s tag video. Her mother goes with the Instagram username @proudaaabear, and her father’s name is Russell Scholl.

Moving toward her educational background, she attended Desert Mountain High School from 2007 to 2011 and became a cheerleader in school.

Later, she enrolled at Pepperdine University and completed her graduation with a major in Broadcast Journalism in May 2015.

Talking about her nationality, she holds an American nationality and has Russian, German, Irish, and Polish ancestry.

Similarly, she became a leader in her Tri-Delta Sorority and served to organize fundraising campaigns for St. Jude Children’s Research Hospital. She even became a member of the Society of Professional Journalists and is a vegetarian. 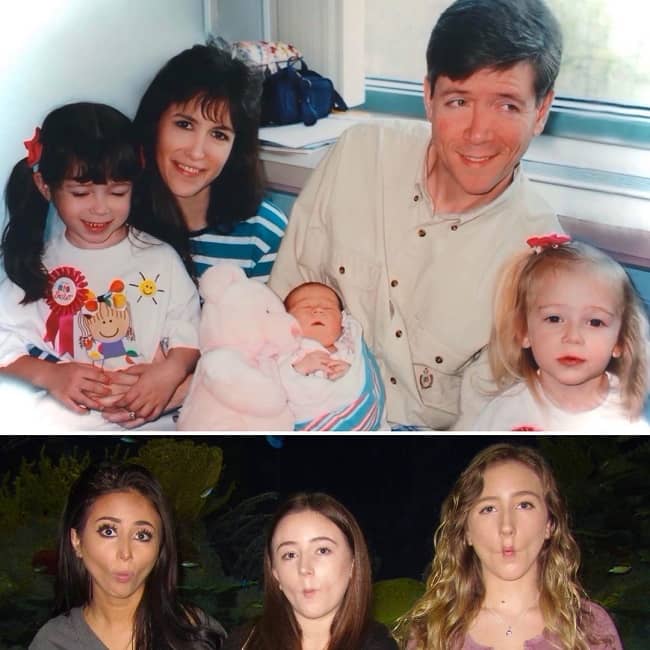 Caption: Amber Scholl on her childhood photo Vs now with her siblings and parents (Source: Instagram)

Similarly, she has black hair and brown hair which she often keeps on experimenting with different hair dyes.

She is active on different social media platforms. She has gained more than 897k followers on her Instagram handle, and 116.7K Followers on her Twitter account.

Likewise, she runs a renowned YouTube channel where she has earned more than 3.31 million subscribers. Additionally, she has also provided her email id [email protected] for business inquiries.

Professionally, Amber Scholl is an American YouTuber and social media personality who instantly gained fame after posting a budget DIY marble floor video on her YouTube channel in mid-2016.

She found it hard to get jobs in the very competitive Los Angeles area after completing her graduation. So she started doing a number of odd jobs during this time, including a brief stint in acting, but still became unable to earn enough to support herself.

Similarly, she even ran the Snapchat account for a women’s blog titled ‘All Women Talk’, based in New York. She also appealed for corporate jobs though she didn’t have much interest in those.

However, she was not lucky enough to get hired either. The only considerable job she did during this time was to drive for Postmates. But she dropped that job as well after she crashed her car on July 4th, 2016.

She literally got broke at the point and as a last-ditch effort. Then, she started posting random videos on her YouTube channel, which had earned about 10k subscribers already.

She launched her self-titled YouTube channel on October 13, 2011. Anyhow, one of her videos on that time titled ‘DIY MARBLE FLOORING’, ended up on the YouTube homepage and her channel instantly got notified.

She started gaining good views and also started watching her other videos on budget-friendly hacks, which till then had only a handful of views.

Then, she decided to quit her other “half-jobs” to concentrate full-time on YouTube after realizing the growth potential of her channel.

She even got interviewed by the ‘Beauty and the Vlog’ podcast in December 2016 after gaining 300k subscribers within a period of three months.

Successfully, she became in the news for posting DIY videos on making a prom dress out of trash bags and a wedding dress out of toilet paper.

As of now, her YouTube channel has garnered more than 3.31M subscribers, with almost 424 million total views.

She has posted several video content with the series named HOME DECOR DIYS, OTHER NONSENSE ツ, Amber School™, FASHION DIYS, Pretending to be a Beauty Guru, FASHION, and get in losers, WE’RE GOING SHOPPING!!!.

As a broadcasting student, she eternally wanted to be a newscaster during her student years. So, she also became an intern at Clevver Media, a Social Media Manager at oceanup.com

, and a Celebrity Host at WMTV, and an Entertainment Correspondent for Blanco Bleu Productions and Maximo TV.

holding the mic to renowned celebrities such as Kendall Schmidt, Kris Jenner, Chris Harrison, Ciara Bravo, Max Schneider, and Emblem3 and ‘WorldMonitor.TV’, on her YouTube channel.

She has additionally been a SAG-AFTRA registered actress since October 2014.

Moreover, she is also equally popular on the photo-sharing app Instagram, where she has garnered more than 897k followers. So far, she has shared her 1,320 posts. 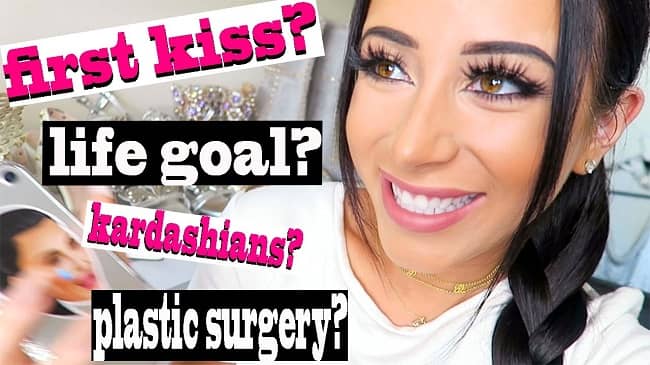 Apart from other popular YouTubers, her ability to come up with creative and exciting solutions to everyday problems under a tight budget.

As she enjoyed watching YouTube videos prior to beginning her own journey as a YouTuber, she finds it hard to afford any of the items shown by the most popular YouTubers of the time.

These things prompted her to share her ideas with a niche audience who were broke like her. From a young age, she was always a crafty kid, and so DIY videos came easily to her.

The marble floor video which made she famous overnight was actually her attempt at making a cheap selfie station that she required for her apartment.

She purchased vinyl tiles and made marble-like flooring within estimates of $20. She felt so amazed at her success that she determined to share the video online and quickly recognized that her unique posts can provide to a market not yet tapped.

Moreover, she is embraced, and cherished by her viewers for being genuine. Similarly, she has not changed as a person from how she had been in her early red carpet videos even after becoming famous.

She is even very much interested in tarrying in touch with her fan base; even though she laments not being able to do it anymore. Previously, she used to reply to every comment and dm when she had a small group of followers and treated them as friends.

Amber Scholl is a famous creative YouTube personality. She garnered the attention of millions of viewers through her creative and interesting DIY hacks.

Her main source of income is social media platforms, especially YouTube. Additionally, she also earns through other brand endorsements and promotions.

Concerning her YouTube channel, she has published 349 videos which all together add up to more than 380.4 million views.

She creates  9 new videos every month on average and gained 2.5k new subscribers with over 573k every day. Thus, her estimated net worth is around $1 million dollars as of August 2020.

Amber Scholl is single and straight. This famous personality has ever talked about her love life journey. She is more focused on herself and seems to enjoy living single.

There is no information regarding her relationships on the web. However, her fans suspect her of dating Coldy Brock. But they have confirmed being, not in a relationship, and are just friends. 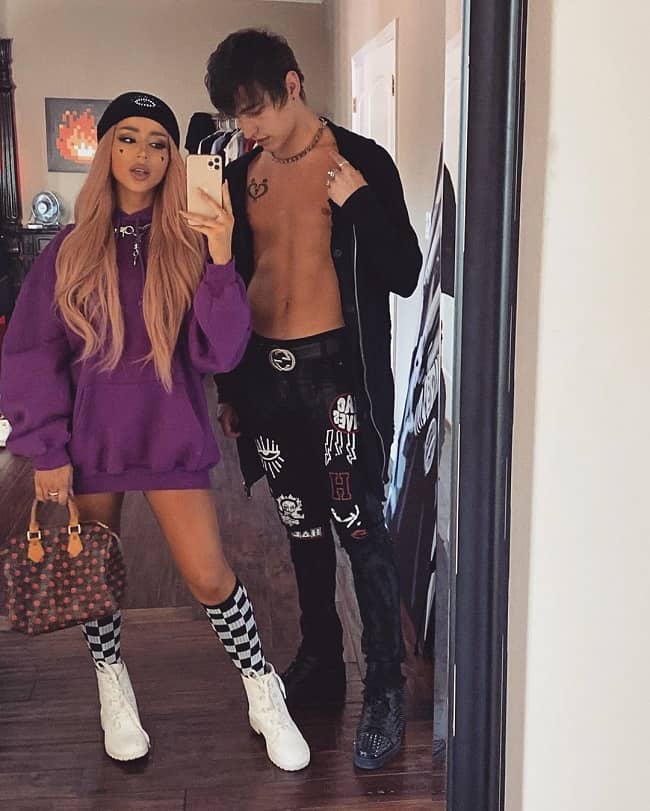 Caption: Amber Scholl posing for a photo with Colby Brock for a mirror selfie (Source: Instagram)

On a personal note, she has a cute little puppy named George Biscuit.  She even has created a separate Instagram handle with the username @sirgeorgebiscuit and has more than 69.9k followers. She has mentioned in the bio of her dog as:

“@amberscholl is my mom! she is also typing this. i can’t believe i’m now a person with an Instagram for their dog but here we are lol”

Further, there is no news of her involvement in the controversy and other negative rumors. That came to hamper her personal as well as professional life. Therefore, she has maintained a beautiful social media image.