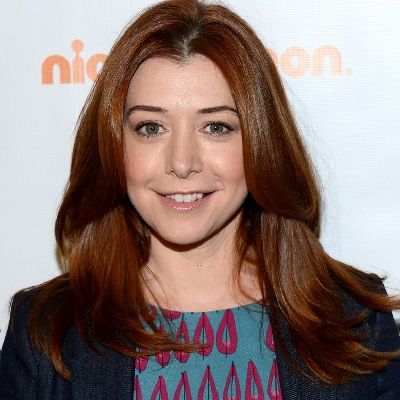 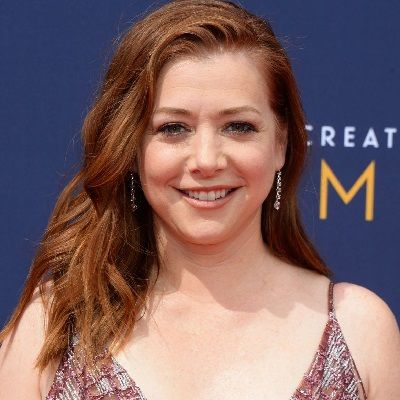 Alyson Hannigan is an American actress. Alyson Hannigan had come to fame after playing her roles as Willow Rosenberg on the television series Buffy the Vampire Slayer, Michelle in American Pie, and Lily Aldrin on How I Met Your Mother.

Alyson Hannigan is 47 years old. He was born on 24 March 1974, in Washington, DC.  Her birth name is Alyson Lee Hannigan and birth sign is Aries. Likewise, her nickname is Allycat. Her mother’s name is Emilie (Posner) Haas, a real estate agent, and father’s name is Al Hannigan, a truck driver. Her parents got divorced when she was just two years old, and she grew up mostly with her mother in Atlanta, Georgia.

Later, at age 11, she moved to Los Angeles. She also owns a mansion in Sacramento, California. Likewise, her father is of Irish ancestry and her mother is Jewish. She belongs to American nationality and mixed ethnicity of Irish and Jewish.

Talking about Hannigan’s educational history, she graduated from North Hollywood High School in 1992. She was a clarinet player as well during her junior high school and she also played soccer until she was injured in her early teens. Then after she attended California State University, Northridge, where she was a member of the Alpha Chi Omega sorority and holds a degree in psychology.

Alyson Hannigan started her acting career at the age of four in Atlanta. She played a major role in My Stepmother is an Alien, a science fiction comedy released in 1988. In 1989, she starred in TV series for the short time ABC sitcom Free Spirit. Prior to coming to the mainstream, she involved herself in commercials sponsoring such companies like McDonald’s, Six Flags, and Oreos. She is a seasoned television actress veteran, who started by guest-starring in Picket Fences (1992), Roseanne (1988), Free Spirit (1989), Touched by an Angel (1994) and The Torkelsons (1991).

Later, she starred in one of her most notorious roles till now, i.e. Buffy the Vampire Slayer (1997) as Willow Rosenberg and How I Met Your Mother (2005) as Lily Aldrin. As a teenager, she -played in How I Met Your Mother co-star, Bob Sager. In early 2004, she also made her West End debut, starring in a stage adaptation of When Harry Met Sally… at the Theatre Royal Haymarket, opposite Luke Perry. 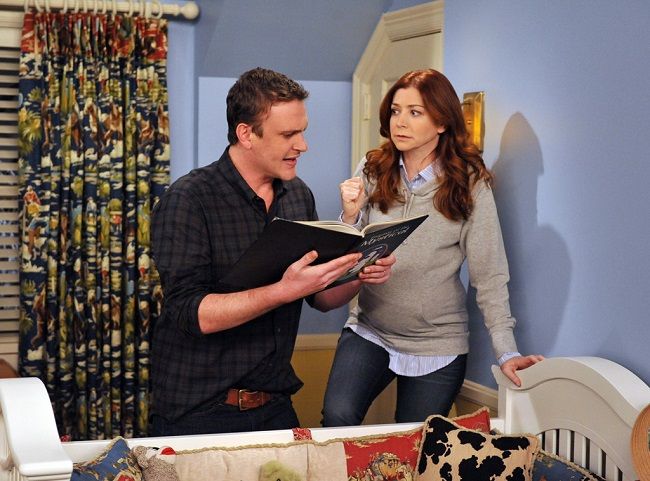 Caption: Alyson Hannigan with her co-star in How I Met Your Mother (Source: www.eonline)

She also made an appearance as a guest star on the ABC animated sitcom The Good Family in 2009. In 2012, she also reprised the role of Michelle in American Reunion. Moreover, he has also hosted the television series Penn & Teller: Fool Us since 2016. Also, she has starred in You Might Be the Killer Chuck (2018). Further, she will be starring in The Abduction of Mary Stauffer as well as flora & Ulysses Phyllis Buckman Post-production.

Furthermore, she has played in television series Man of the House Jessie Pilot (2018), Fancy Nancy Claire Clancy Voice, (2019) Kim Possible Ann Possible Television film,  Pure Esther Dunkel 6 episodes (2019). Moreover, Alyson was a spokesperson for breast cancer and she appeared in a new four-page brochure (featured in Vogue, Glamour, Self, Mademoiselle, and Women’s Sports and Fitness) to raise awareness about the disease as of May 2000.

Moreover, “Alyson Hannigan” by Juvenile Wreck, and “This One Time” by The Malcolm Effect are the two songs written recorded about her. Also, Alyson supports the StubHub’s Mom’s Night Out program. It is the program that  celebrates mothers and works with the Adopt-A-Classroom program. Additionally, she also has been good friends with Seth Green since the two met while filming My Stepmother Is an Alien (1988).

Alyson also babysat for Bob Saget’s children in her teenage. She also once went on vacation to Hawaii with his family and coincidently, two decades later, they co-starred together in How I Met Your Mother (2005), with Saget playing (the voice of) the older “Ted Mosby” and Hannigan playing younger Ted’s best friend’s fiancée. In 2020, she made an appearance in television show Girl Scout Cookie Championship and Outmatched as Annabeth.

However, she has been nominated for many awards like 1989 Young Artist Award Best Young Actress in a Motion Picture: Comedy or Fantasy My Stepmother Is an Alien, 1990 Best Young Actress Starring in a Television Series Free Spirit, Teen Choice Awards Choice TV Sidekick Buffy the Vampire Slayer,2001 Saturn Awards Best Supporting Actress on Television.

Alyson Hannigan has earned a decent sum of money by her acting career. Her estimated net worth is around $18 Million though her salary is not revealed yet.

Hannigan is a married woman. She tied the knot with her Buffy the Vampire Slayer recurring co-star Alexis Denisof at Two Bunch Palms Resort in Desert Hot Springs, California, on October 11, 2003. They are blessed with two daughters Alyson and Alexis live. She is very happy and blissful with her family. 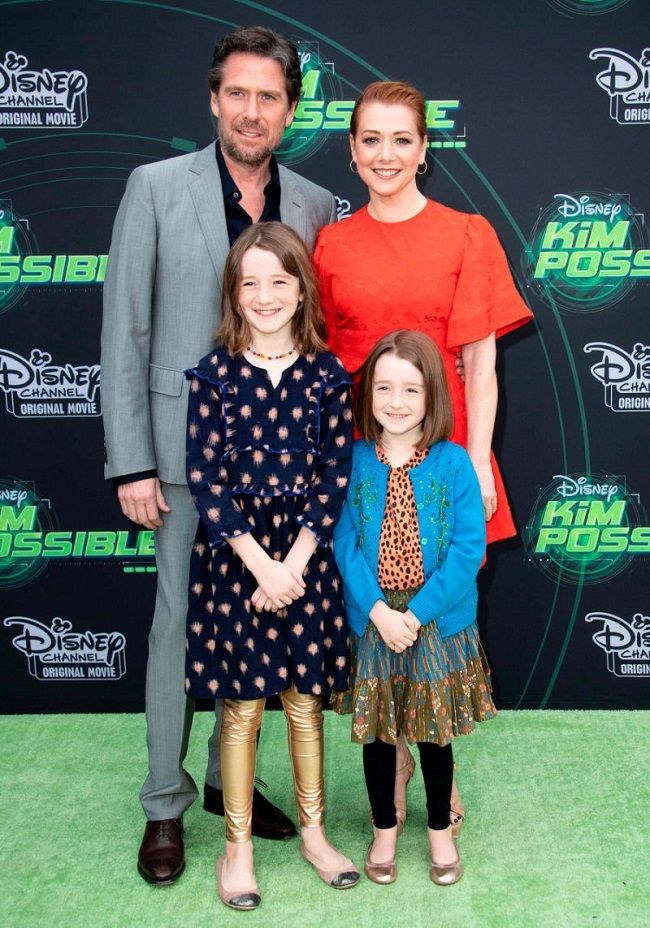 Caption: Alyson Hannigan with Family for Night out in Kim Possible (Source: Yahoo)

Talking about her past relationship, she has been in a relationship with Ginger Fish (1990-1998).

Reflecting on Hannigan’s rumors, there were rumors about her plastic surgery for nose and breast. Although she hasn’t confirmed it yet. Moreover, there are no any rumors and controversy regarding her personal and professional life currently.

Alyson has a charming personality. She has a height of 5 feet 5 inches and weighs around  52 kg.  Her body measurements are 34-23-34 inches. Similarly, her bra size is 32B, dress size 2 (US) and shoe size 7.5 (US). Furthermore, she has dyed her hair red and has green eye color. Also, she has several tattoos and some are a tattoo of tribal dolphins on her ankle, a Japanese kanji (for luck and happiness) on her back, and a cartoon turtle on her left foot. 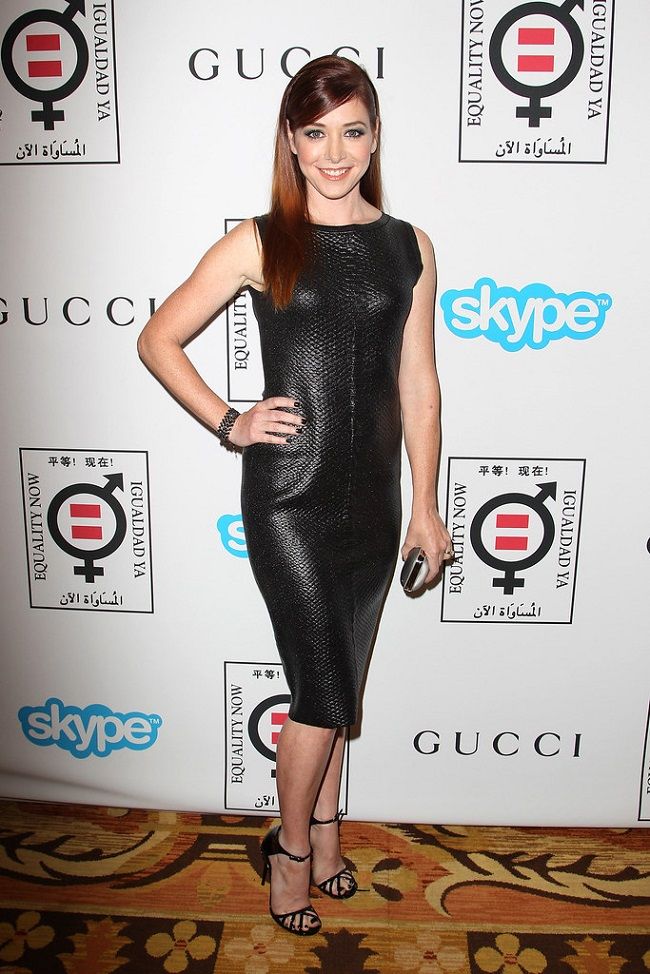