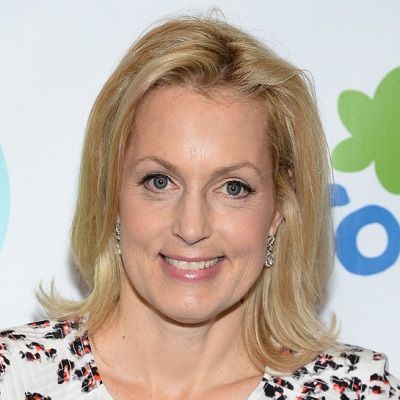 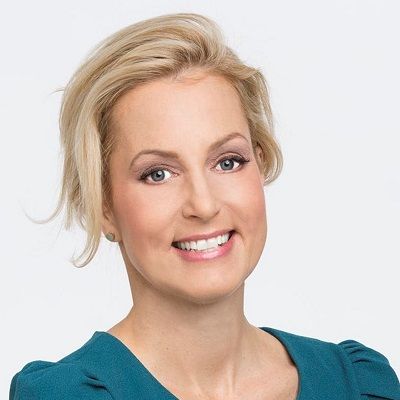 Ali Wentworth is a prominent American actress, producer, author, and comedian. Ali Wentworth is mostly popular for her involvement in movies and shows like “It’s Complicated”, “Jerry Maguire”, “Nightcap”, and “Will and Grace” among numerous others.

What is the condition of actress Ali Wentworth after testing positive for COVID-19? 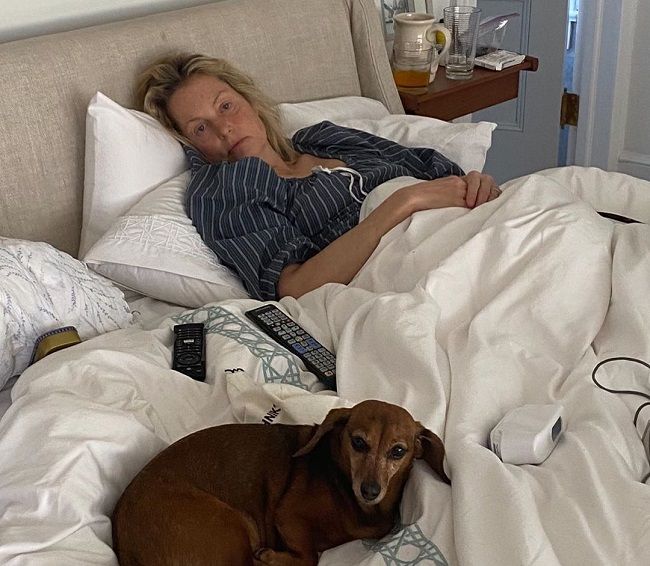 The prominent American actress took to Instagram to announce that she was struggling with COVID-19 while self-quarantining in their New York home. She shared the unfortunate news on 1 April 2020. Then on 13 April 2020, her husband, Georg, also announced that, though he was asymptomatic, he too tested positive for COVID-19.

The couple joined the ABC late-night show on April 15 and shared their journey and experience with the novel coronavirus that is creating a global pandemic around the world in 2020. George Stephanopoulos only suffered some lower-back pain and a brief loss of smell several weeks before the test.

However, Ali’s case was more severe. She spent 16 days bedridden after she contracted the virus and she battled the symptoms including a high fever and body aches during this time. Talking about their experience, her husband says:

“Ali had a real tough case. She was in bed for a couple of weeks. I’ve never had a fever, never had a cough, never had shortness of breath, never had chills. The only thing I could think of is, one day, a couple, now almost three weeks ago, there was a little bit of lower back pain and went to bed early. And then a couple of days after that had no sense of smell for about a day. But that was several weeks ago. And since then, just nothing beyond that.”

Then Ali Wentworth jokingly shares the varying experience the lovers had individually during the show:

“It’s funny because it’s very indicative of our lives. I get corona and I’m deathly ill for three weeks with a high fever and sweating and achy and going crazy like Martin Sheen in Apocalypse Now. And George gets it, and he has no symptoms. The whole thing annoys me and if I wasn’t quarantined with him, we would probably take a separate weekend away.”

Ali also shared that her husband was a rock star during this time and helped her recover. Though George didn’t have to bathe her or anything, he frequently brought her food. When asked how she handled her isolation, Ali said she spent most of the time focused on getting healthy and getting well. She mostly slept and took Tylenol P.M. timely. She further adds:

“I watched all seven seasons of Mad Men. And in my delirium, I actually believe, I thought I was married to Jon Hamm and that he was cheating on me.”

As Ali was on Jimmy Kimmel Live, she told the viewers that if they had coronavirus and had any questions about the experience, they could come directly to her. She said, “I’m telling you right now, you can DM me on Instagram if you have it and you’re scared and you want any pointers”. Ali also added that talking to people who had COVID-19 was really helpful when she was first diagnosed.

Ali Wentworth was born on 12 January 1965 and she is currently 57 years old. Her full name is Alexandra Elliott Wentworth and she is originally from Washington, D.C. Moreover, Ali’s parents are their mother Muffie Cabot (née Mabel Bryant Hobart), and father Eric Wentworth. Her mother was Nancy Reagan’s White House Social Secretary from 1981 to 1983. Likewise, her father was a reporter for The Washington Post.

Ali’s stepfather is Henry Brandon and he was the Washington correspondent for The Sunday Times of London. Similarly, her maternal grandmother was explorer Janet Elliott Wulsin.

Talking about her educational journey, Ali Wentworth graduated from the Dana Hall School for Girls in Wellesley, Massachusetts. Then she went on to study drama at Bard College in Annandale-on-Hudson, New York before graduating from New York University.

Likewise, as a teenager, Ali attended the same Washington D.C. school as actor Jeffrey Wright. Also, she is a close friend of actress Mariska Hargitay and she is also friends with Jane Kaczmarek and Lee Woodruff. Ali considers Chris Rock one of her favorite comedians. 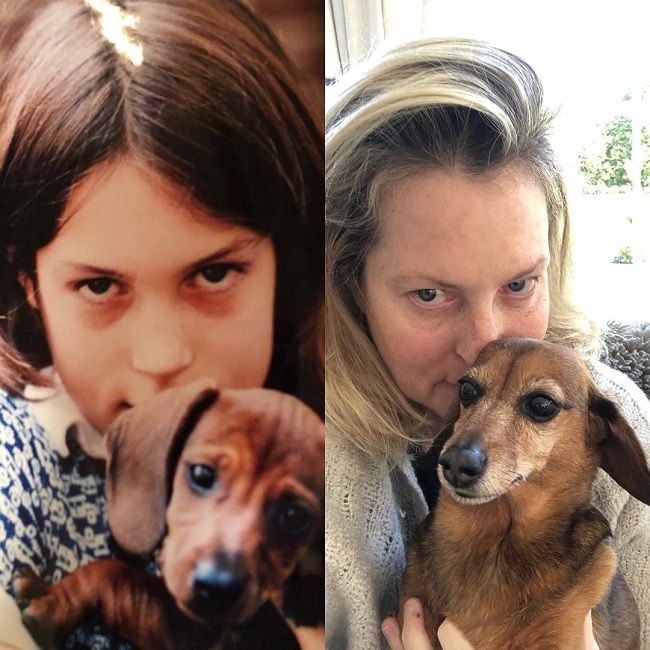 Caption: Ali Wentworth’s past and present photo with her pet. Source: Instagram

Professionally, Ali Wentworth is an actress, author, comedian, and producer. She is popular for It’s Complicated (2009), Jerry Maguire (1996), and Nightcap (2016) among many remarkable works. Likewise, Ali debuted as a cast member on the Fox sketch comedy series In Living Color from 1992 to 1994. There, she was popular for her impressions of Cher, Amy Fisher, Hillary Clinton, Princess Diana, Brooke Shields, Lisa Marie Presley, Sharon Stone, and other characters.

Ali’s recurring characters included Candy Cane. Cane is a deranged kids’ show host. She had had a string of bad relationships with her male coworkers. Likewise, she is also Grandpa Jack McGee’s promiscuous teenage daughter. Jim Carrey played the role of Grandpa Jack on The Dysfunctional Home Show.

Moreover, Ali Wentworth made correspondent appearances on The Tonight Show with Jay Leno and The Oprah Winfrey Show. In the year 1995, Ali played Jerry Seinfeld’s girlfriend Sheila “Schmoopie” in the memorable Soup Nazi episode of Seinfeld. This turned out as one of the most memorable episodes of the entire sitcom.

Ali also had a recurring role as the boss of the title character on the Warner Bros. (WB) series Felicity. Then in 2003, Ali co-hosted the syndicated talk show Living It Up! with Ali & Jack working alongside Jack Ford. 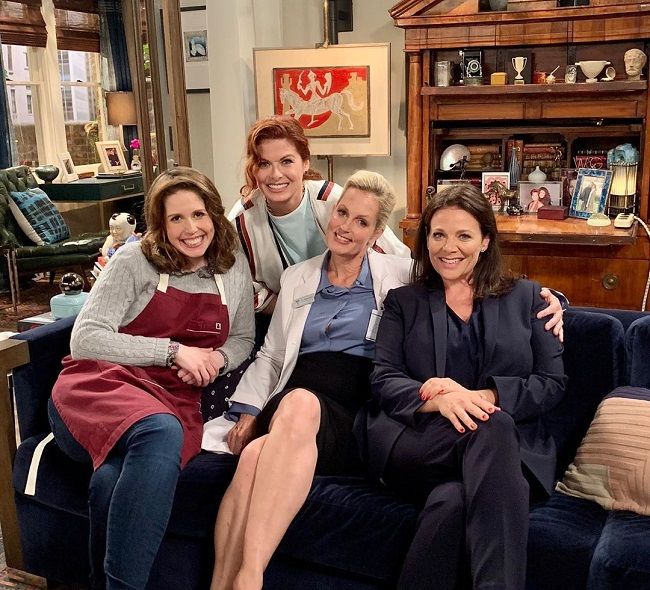 Caption: Ali Wentworth with her co-stars of Will and Grace. Source: Instagram

Ali Wentworth has worked on films like Jerry Maguire, Office Space, It’s Complicated, Meeting Daddy, Call Me Claus, Hardball, Seinfeld, Life Among the Cannibals, Big Packages, Trial and Error, The Real Blonde, and The Love Bug among many others.

Furthermore, Ali Wentworth also starred in the comedy Head Case on the Starz television network. She also guest-starred on the NBC show The Marriage Ref. Then Ali went on to host Daily Shot. It is a short daily talk show segment on Yahoo! Shine.

Moreover, as of 2016, Ali Wentworth created as well as stars in Nightcap as the lead character Staci Cole. She also appeared on the 23 July 2017 episode (Season 2 Episode 07) of the “$100,000 Pyramid” (The $100,000 Pyramid). She starred as a celebrity guest opposite Kathy Najimy. Ali helped Kathy win the $150,000 grand prize. She also writes a column in the women’s magazine Marie Claire.

Likewise, a chapter in her 2018 book Go Ask Ali is a cautionary tale about whether or not to hire a ‘hot’ babysitter. Ali stated that she has three friends who’ve lost their husbands to babysitters over the years. Moving on, Ali has a net worth estimation of around 6 million dollars.

Ali Wentworth is the wife of George Stephanopoulos. George is ABC News chief anchor correspondent and former political adviser to the Clinton administration. The two met on a blind date in April 2001 and they engaged two months later. Later, on 20 November 2001, the lovers tied the knot at the Archdiocesan Cathedral of the Holy Trinity on New York City’s Upper East Side.

The lovers together have two daughters namely Elliott Anastasia Stephanopoulos and Harper Andrea Stephanopoulos. Elliott was born on 9 September 2002 and Harper was born on 2 June 2005. Further, in an episode of Comedians in Cars Getting Coffee, Ali Wentworth shared that a well-known writer once offered her $40,000 for a night together.

Ali Wentworth appeared on ABC’s Good Morning America to announce her engagement to George Stephanopoulos. Similarly, her father-in-law is the Very Reverend Robert Stephanopolous. He is the Dean at Holy Trinity Greek Orthodox Church in NYC. It is the home parish of the Greek Orthodox Archdiocese of America. Moreover, he also presided over the Sacrament of Holy Matrimony that united Ali and George. 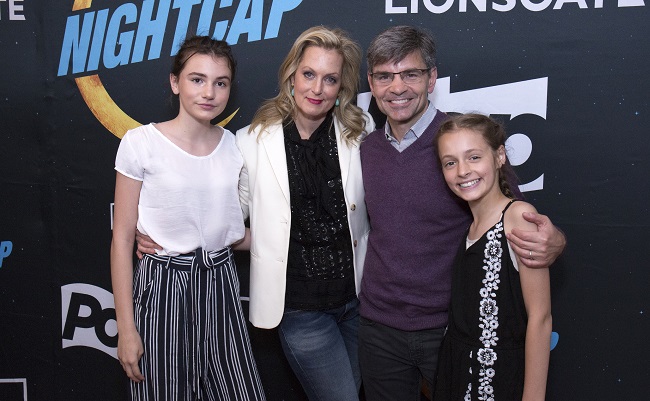 Caption: Ali Wentworth with her daughters and husband in an event. Source: Wonderwall

Ali stands at a height of 5 feet 7 inches and her chest-waist-hip measures are 35-26-36 inches respectively. Moreover, her dress size is 7 according to the US standard. Ali has blonde hair and blue eyes.

Talking about her social media presence, Ali joined Twitter in June 2011 and so far has 96.3k followers. Similarly, Ali has an Instagram handle that boasts 672 post shares and 215k followers at the time of preparing this biography.