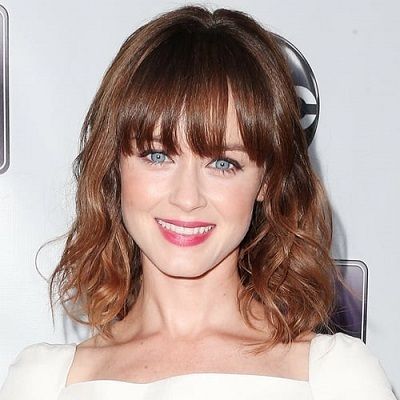 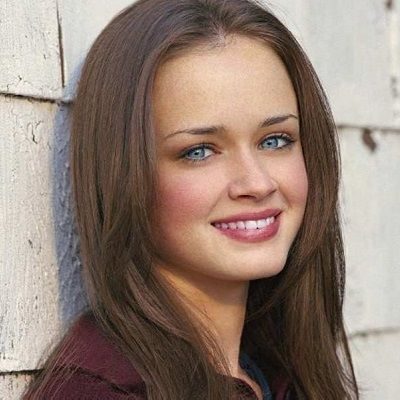 Alexis Bledel is a prominent American actress and model. Alexis Bledel is extremely popular for her role as “Rory Gilmore” on the TV series “Gilmore Girls” (2000-07). She is a hard worker and has taken a respectable position in the field of American acting and modeling.

Alexis Bledel was born in the USA, Houston, Texas on September 16, 1981, and her age at present is 40 years old. Her mother’s name is Nanette Bledel and her father’s name is Martin Bledel. Her mother worked as a gift processor and flight attendant. Zodiac sign of Bledel is Virgo and she belongs to mixed (Spanish, Scottish, English, Irish, distant German) ethnicity. Her nationality is American. Eric is the younger brother of Alexis Bledel.

Talking about her other family members, Alexis’s paternal grandfather is Enrique Einar Bledel Huus. He was born in Buenos Aires, Argentina, and was of Danish and distant German descent. He was also the Vice President of Coca-Cola Latin America and the Coca-Cola Inter-American Corporation.

Likewise, Alexis’s paternal grandmother is Jean (née Campbell) and she was originally from New York. She had Scottish and English ancestry. Moreover, her mother, Nanette, was born in Phoenix, Arizona, and later moved to Guadalajara, Mexico at the age of eight. Her mother was raised there and in Mexico City. Due to her upbringing in the Spanish-speaking family, Alexis didn’t learn the English language until she began school. Alexis also considers herself a Latina.

Talking about her educational background she joined St. Agnes Academy in Houston, Texas. Her mother mainly encouraged her to secure her career in the acting sector and also suggested plus encouraged her to attend Community Theater. Later on, Alexis also attended New York University’s Tisch School of the Arts for one year.

Alexis made her debut in film in the year 2000 and appeared in the film titled “Rushmore” as ‘Student’. She didn’t get the popularity as she expected because of the minor role she played. However, she struggled more for a major role in different films.

At the beginning career, Alexis played in low-rated films that include “Bride and Prejudice”. She made her first T.V debut in the year 2000 and appeared in a T.V series “Gilmore Girls” in a lead role in 153 episodes until 2007. Bledel, in 2005 played a prostitute role as screen name Becky, in the anthology neo-noir crime thriller “Sin City“.

In the year 2006, Alexis co-starred in the romantic comedy “I’m Reed Fish” as the fiancee of Baruchel’s. Again in the year 2008 August, she replayed the Lena Kaligaris in “The Sisterhood of Traveling Pants 2” role after the end of “Gilmore Girls“.

Furthermore, The Good Guy, Post Grad, The Ballad of G.I. Joe, The Conspirator, The Kate Logan Affair, Girl Walks into a Bar, Violet & Daisy, The Brass Teapot, Parts per Billion, and Outliving are the movies that Alexis starred in from the year 2009 till 2014. 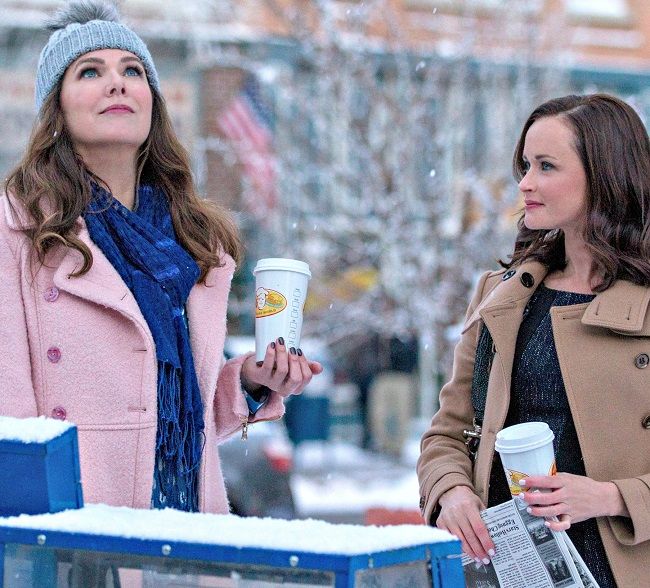 Caption: Alexis Bledel along with Lauren Graham captured during the scene (Source: Glamour)

In 2009, she contracted a with the modeling department of ‘IMG.’ She also made an appearance as ‘Dr. Julia Wise’ in an episode of the television series ‘ER.’
In 2010, she played in ‘The Conspirator’ as ‘Sarah Weston.’ However, the movie was critically acclaimed and was showcased at the ‘Toronto International Film Festival.’ Released for theatrical viewing on April 15 the following year.

Likewise, she appeared as ‘Beth Dawes’ in three important episodes of the hit American television series ‘Mad Men’ in 2012. In the same year, she cast as ‘Chrissie Myers’ in the theater production of ‘Regrets.’

In 2013, she made an appearance in ‘Remember Sunday,’ a telefilm. She even appeared in the television show ‘Us & Them’ where she played the lead role. In 2014, she portrayed ‘Sarah’ in Brian Horiuchi’s romantic drama film ‘Parts per Billion.’

She also made a guest appearance in the TV series ‘Motive’ in 2015. She even appeared in the movie ‘Jenny’s Wedding.’  In the following year, she appeared ‘Gilmore Girls: A Year in the Life,’ a sequel to the TV series ‘Gilmore Girls.’ In 2017, she entered the ‘Hulu’ dystopian web drama series ‘The Handmaid’s Tale’ where she represented the character of a bisexual woman named ‘Emily Malek.’

In 2019, she appeared alongside Beau Knapp and Luke Hemsworth in the crime drama ‘Crypto.’

Moreover, she has graced the cover of many fashion magazines, including Teen Vogue, Glamour, Parade, Nylon, CosmoGirl, Vanity Fair, Lucky, Elle Girl, and Seventeen. In 2000, she made an appearance in print advertisements for Bonne Bell lip balm and Naturistics lip gloss.

The well-known personality is also famous for his brand endorsement activities. He has endorsed or promoted brands like Naturistics Lip Gloss and Bonne Bell Chapstick.

Reflection on Alexis’s Awards and Nomination, she has won many awards. “Young Artist Awards” in 2001, “Teen Choice Awards” in 2005 and also nominated for more than five awards. In 2002, she appeared in the film “Tuck Everlasting” for which she was nominated for the “Saturn Award.”

She appeared in T.V series “Gilmore Girls” for which she won ‘Teen Choice Awards’ in the category of “TV – Choice Comedy Actress” in 2006. Again in 2012 for the film “Mad Men”, Alexis was awarded for the “Drama Guest Actress”.

Seeing her performance in her field we can surely assume that she earns a good amount of money. Her estimated net worth is around $8 million. However, her salary and income are still under review.

Cute and gorgeous Alexis is a married woman. Vincent Kartheiser and Alexis Bledel were in relation and after several years of continuity into their relationship, they finally announced their engagement which was in March 2013. Eventually, they got married in California, June 2014 and have already welcomed a new member of their family by giving birth to their son in May 2016.

Previously, she and fellow former Gilmore Girls co-star Milo Ventimiglia was in a relationship from December 2002 to June 2006. Likewise, she supported the 2012 re-election of Barack Obama and urged her fans to vote. 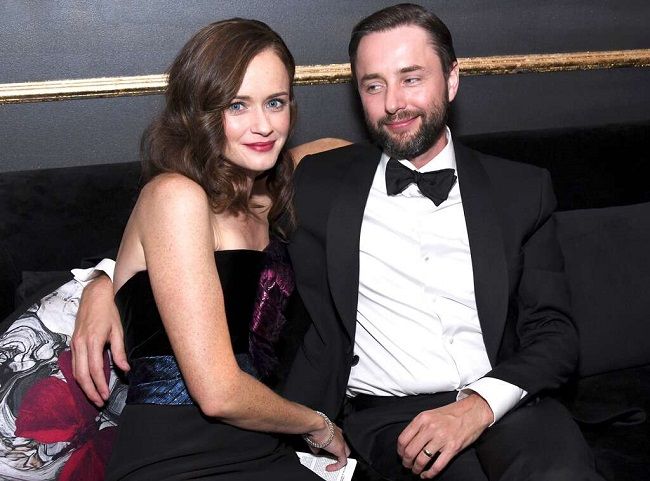 Separation of Alexis and Vincent got viral all over the internet. After this incident, the couple quickly announced the news was false. And described their healthy relationship. Also how happy they were living together and also the enjoyment of their marital life. Previously, Milo Ventimiglia and Alexis had been in the relationship during the year from 2002 to 2006.

Alexis Bledel has an amazing personality with a beautiful body. Her height is 5 feet 7inch. Her weight is 54kg. Similarly, her body figure measures the size of 34-24-34 inches. Her bra size is 32B, shoe size is 7(US), and also the dress size is 2-4(US). Furthermore, her natural hair color is brown. Also, she has dyed her hair into blonde and her eyes are blue. 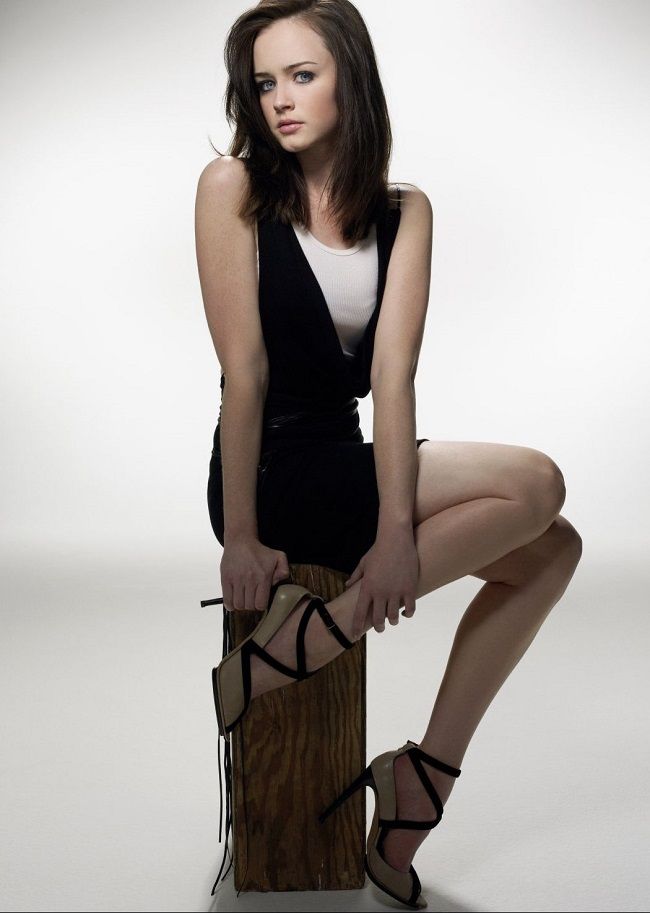