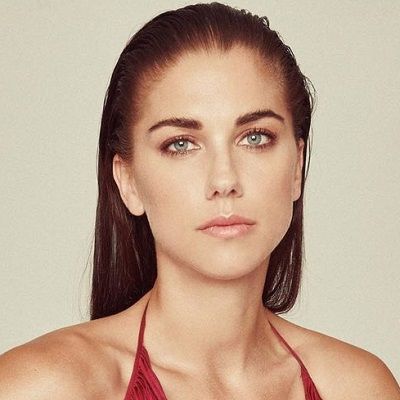 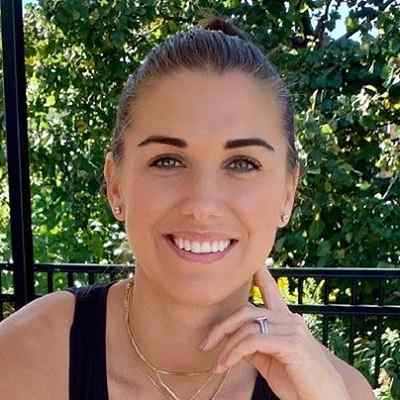 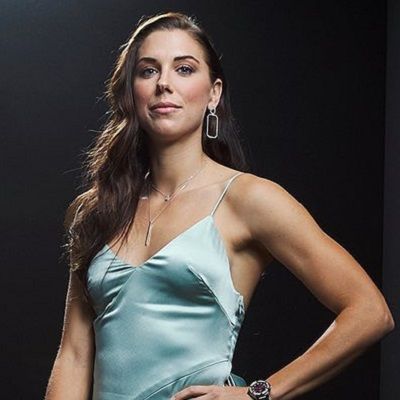 Alex Morgan is a professional soccer player. Alex Morgan had come to fame for being a member of the Orlando Pride in the National Women’s Soccer League (NWSL). As well as in the United States national team.

The player was born on the 2nd of July, 1989. Her parents are Pamela and Michael Morgan. Full name of Alex Morgan is Alexandra Morgan Carrasco and her birth name is Alexandra Patricia Morgan. Her zodiac sign is cancer. Likewise, she was born in San Dimas, California. Presently, she is 31 years old. Her nationality and ethnicity are American.

Similarly, she has two siblings named Jeni and Jeri. Along with her two siblings, the family was shifted in the nearby suburb of Diamond Bar. Moreover, Diamon Bar is located about thirty miles east of Los Angeles.

Since an early age, she used to be a multi-sport athlete. She had even begun playing soccer with the American Youth Soccer Organization (AYSC). However, according to some sources, she didn’t play club soccer until she is 14 when she joined Cypress Elite. She was always interested and active in the sports field.

Morgan completed her high school in Diamond Bar High School. In her high school, she was a three-time all-league pick. And was named All-American by the National Soccer Coaches Association of America (NSCAA). She was well-known for her speed and sprinting ability during that time.

At the age of 17, she was called up to the United States under-20 women’s national soccer team. And she got injured in an anterior cruciate ligament (ACL). Moreover, she was playing in a scrimmage against the men’s junior national team. Because of this, she did not play for the team until April 2008.

In the context of the player’s professional life, Alex Morgan has played for Olympic Development Program (ODP) regional and state teams as well.

She played California Golden Bears from 2007 to 2010 by attending UC Berkely. Talking about her club career, she was the first overall pick in the 2011 WPS Draft by the Western New York Flash on 14th January 2011. Later on, she suspended operations in early 2012 due to certain legal and financial difficulties. 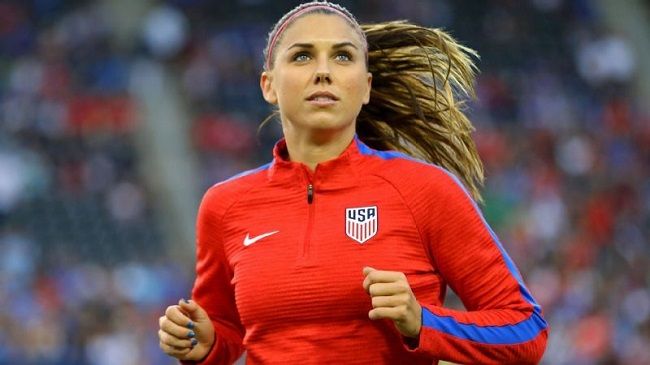 Likewise, she joined the team of her national teammates Hope Solo, Sydney Leroux, Megan Rapinoe and Stephanie Cox on the Seattle Sounders Women for the 2012 season. She was one of three U.S. National team players to join the Portland Thorns FC for the inaugural season of the National Women’s Soccer League through NWSL Player Allocation in 2013.

Currently, she is involved in Orlando Pride. On the 26th of October 2015, it was confirmed that the Thorns had traded Morgan. On 5th January 2017, Morgan signed with French champions Lyon for a reported $33,000 per month.

She scored five goals in the opening group game against Thailand to equal the World Cup single-game goals record set by Michelle Akers as a leader of the USWNT at the 2019 FIFA Women’s World Cup, in 1991.

She is also a novelist and has featured in a number of advertisement campaigns and modeling assignments In 2012, she signed a contract with Simon & Schuster to pen The Kicks, a four-book series for middle schoolers. In 2015, The Kicks, a live-action kids comedy series based on the books, began airing on Amazon Prime. 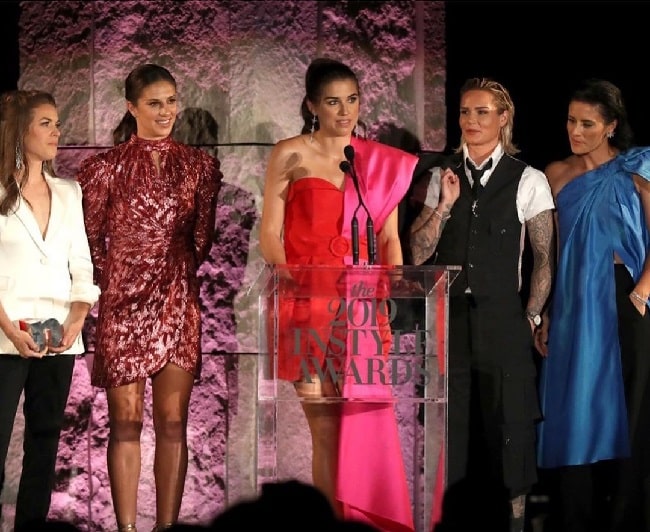 Besides Alex Morgan has even signed a contract with several endorsement deals with businesses including  McDonald’s, Nike, Panasonic, AT&T, Chobani, P&G, Mondelez International, and Coca-Cola. Time named her as the highest-paid American women’s soccer player in June 2015 and attributed mostly to her endorsement deals.

In July 2011, she contracted with a one-year endorsement deal with Bank of America. Likewise, in January 2012, she along with her national teammate Heather Mitts became brand ambassadors for a health product company, GNC. In the following year, she appeared on behalf of Ubisoft promoting the launch of their video game, Just Dance 4.

In 2013, she made an appearance in television commercials for Bridgestone. Also, in July 2018, she joined the team of ambassadors at Molecule, an athlete recovery mattress, and bedding company.

In 2016, she associated with UNICEF Kid Power as a UNICEF Kid Power Champion, in an effort to fight global malnutrition and raise awareness among kids, through the world’s first “wearable for good”, created by UNICEF.

It is estimated that Alex Morgan has a net worth of $3 million in 2019.  It even includes her properties and belongings. She has a yearly average salary of $450,000. Being a prolific goal-scorer for the United States Women’s National Team, she has been able to win many titles and awards.

Moreover, she has various endorsement deals with countless big-name companies. Some of her deals are with Nike, Panasonic, and Coca-cola.  It seems as if she has a connection of partnerships with many other companies. Furthermore, she had even starred in some of the television commercials. And has makes over $3 million annually.

Regarding her relationship status, Alex Morgan is happily married to Servando Carrasco. The couple shared their vows on 31 December 2014. They tied the knot after dating each other for seven years and being engaged for one whole year. The lovebirds married at Rancho Dos Pueblos overlooking the ocean in Santa Barbara. They shared their vows under an archway of pink, cream, and peach-colored roses. The bride wore a long-sleeved lace wedding dress made by Berta Bridal with a plunging v-neck and keyhole back.

Similarly, she changed into a custom wedding dress made by Amsale for the reception. Their wedding party included maracas honoring Carrasco’s heritage as well as coke cans with each of the guest’s names. At midnight, a balloon drop took place and everyone celebrated the arrival of 2015 right after the couple’s wedding. 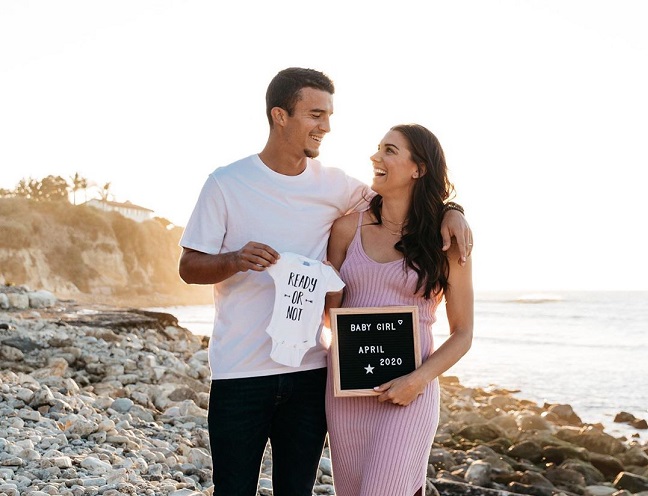 Caption: Alex Morgan and her husband disclosing their pregnancy in October 2019. Source: Instagram

The duo engaged in December 2013 after a fireworks show in Manhattan Beach. They went to the same college and met there while both playing soccer at Cal Berkeley. Besides this, the couple is expecting their first child, baby girl. They announced the news on 23 October 2019 and they are expecting the arrival of the child in April 2020. Moreover, her husband. Servando Carrasco is a popular Mexican soccer player. Finally, on May 7, 2020, she gave birth to baby girl  Charlie Elena Carrasco.

There are not many rumors and controversy. However, Morgan took some criticism for trolling England with a tea-sipping celebration after scoring a goal against the country in the semi-finals of the Women’s World Cup. She also claimed that she felt kind of uncomfortable with the criticism.