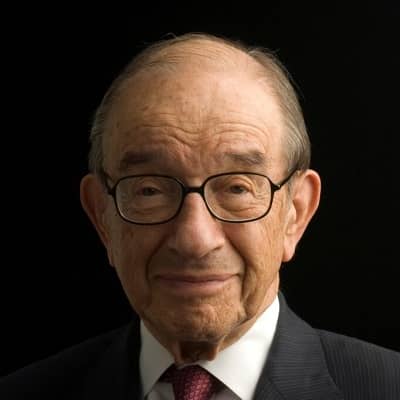 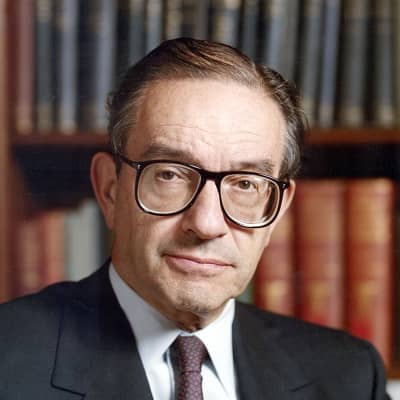 Alan Greenspan is a popular American economist and the 13th Chair of the Federal Reserve. Alan Greenspan is well-known for serving the chair from 1987 to 2006, the second-longest tenure in history.

Alan Greenspan was born on March 6, 1926, and he is currently 95 years old. He hails from the Washington Heights area of New York City, New York, and his zodiac sign is Pisces. Talking about his family, his parents are father Herbert Greenspan and mother Rose Goldsmith.

Caption: Alan Greenspan was honored by the President of New York University, John Sexton, at the Convocation in Honor of Alan Greenspan and Gordon Brown on December 14, 2005. Source: Getty

Regarding his educational journey, he graduated high school in the year 1943 from the George Washington High School. He attended this institution from 1940 to 1943 and one of his classmates at this school was John Kemeny.

Moreover, this personality played clarinet and saxophone with Stan Getz. For his higher education, he studied clarinet at the Juilliard School. He attended this institution from 1943 to 1944. Leonard Garment was also a bandmate of the Woody Herman band.

Later on, he attended Columbia University and studied advanced economic studies under Arthur Burns. However, he later withdrew due to his increasing work demand at Townsend-Greenspan & Company. Furthermore, he earned his Ph.D. in economics in the year 1977 from New York University.

Professionally, Alan Greenspan is a popular economist. People recognize him for serving five terms as the 13th chair of the Federal Reserve in America from the year 1987 to 2006. He is also the owner of the company Greenspan Associates LLC through which he works as a private adviser as well as provides consulting for firms.

President Ronald Reagan initially appointed him as the Federal Reserve chairman in August 1987. For consecutive four-year intervals, this personality was reappointed again until his retirement on January 31, 2006. He served the second-longest tenure in the aforementioned position. The only person to serve more than him was William McChesney Martin. 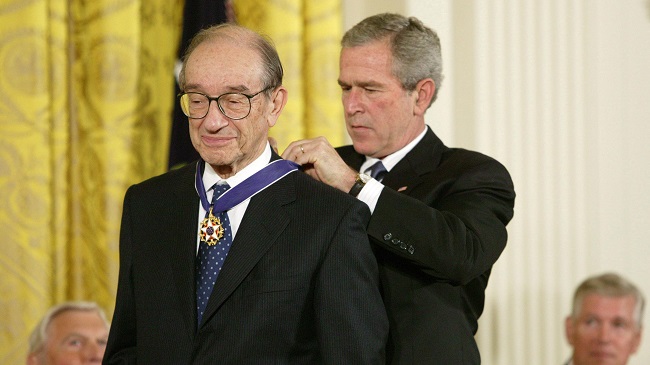 The congress democratic leaders criticized this personality because he politicized his office. They claim that he did so due to his support for Social Security privatization and tax cuts. Many people also argue the easy-money policies of the Federal government during his tenure were a leading cause of the dot-com bubble and subprime mortgage crisis. The easy-money policies also include the practice known as the Greenspan put.

However, he argues that the housing bubble was not a result of low-interest short-term rates. Instead, it was a worldwide phenomenon caused by the progressive decline in long-term interest rates. This economist also argues that it was a direct result of ‘high savings rates in the developing world and its inverse in the developed world’ relationship.

Alan Greenspan is a married man. His wife is Andrea Mitchell and she is a famous American journalist. The two started dating each other in the year 1984. At the time, he was 58 years old whereas his lover was 38 years old. Then in the year 1997, the couple tied the knot. It was done by Supreme Court Justice Ruth Bader Ginsburg.

Prior to this, he was married to Joan Mitchell. His first wife is a Canadian artist and the two tied the knot in 1952. However, Mitchell and Greenspan’s marriage was annulled less than a year later. After that, he also dated Barbara Walters in the late 1970s. Barbara is a newswoman. 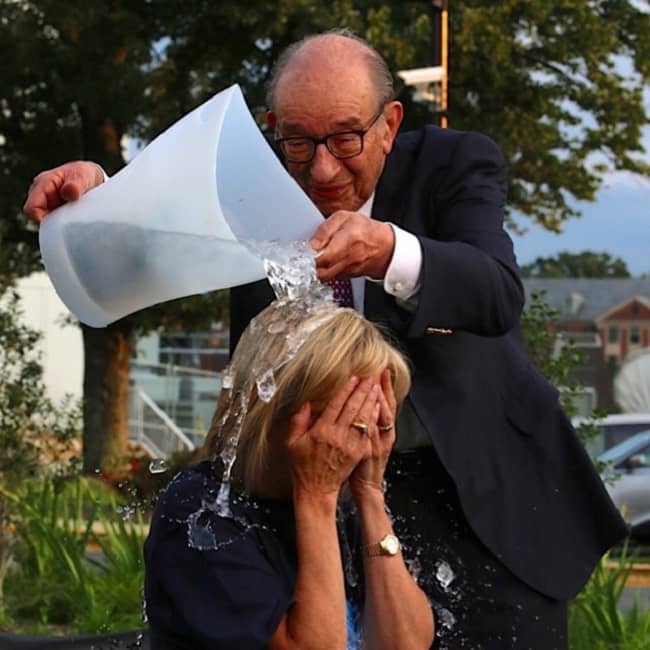 Caption: Alan Greenspan poured cold water on his wife during the ALS Ice Bucket Challenge in the year 2014. Source: Instagram

Alan Greenspan stands tall at an approximate height of 5 feet 10 inches or 180 cm or 1.8 meters. Likewise, his weight is around 84 kgs. Other than this, there is no information regarding the economist’s further body measurement details like chest-waist-hip measures, dress size, shoe size, biceps, etc. Further, this personality has brown eyes and hair of the same color.