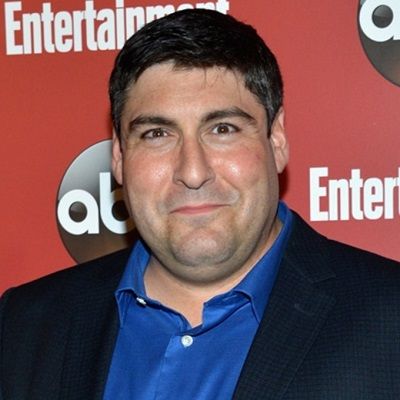 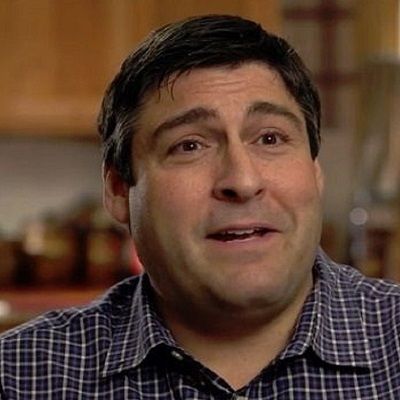 Adam is the youngest born of a Jewish Family in Philadelphia, Pennsylvania. He was born to Beverly and the late Murray Goldberg on April 2nd of 1976.

He grew up in Jenkintown with two elder brothers Barry and Eric. As of 2022, he is 46 years old. He was a writing enthusiast from a very young age.

At the age of 15, he staged his first play, Dr. Pickup. Subsequently, he earned the top prize at the Philadelphia Young Playwrights Festival. 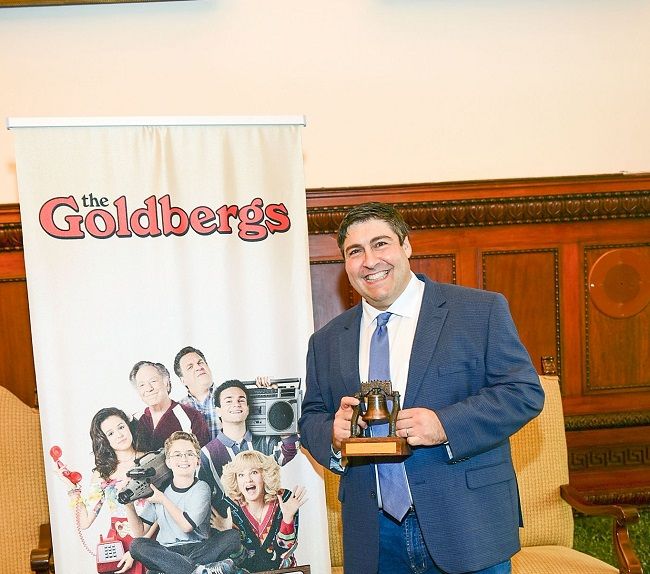 Caption: Adam was honored with the Liberty Bell on September 15, 2017
Source: Getty Images

Goldberg went to William Penn Charter School in Philadelphia, Pennsylvania. After high school, he wanted to take forward his childhood interest as his professional approach.

Consequently, he moved to New York and attended New York University in 1994. Here is graduated with a double major in film and dramatic writing in 1998.

Adam who started writing as a childhood interest has made a successful career out of it. He has been a well-recognized part of theater shows, Tv shows as well as the film industry.

Today at the age of 46 he stands at a net worth of $10 million. Moreover, with his ongoing shows and plans, he is sure to get richer with time.

Although Goldberg is a television personality and has a whole series about his childhood, he is not very open about his married life. Adam married his long-term girlfriend  Sarah Goldberg.

She is a therapist. The two met at a summer theater program for high school students at Northwestern University when he was only 16. Apart from this, he has not mentioned any details about his current status regarding the relationship or his children. 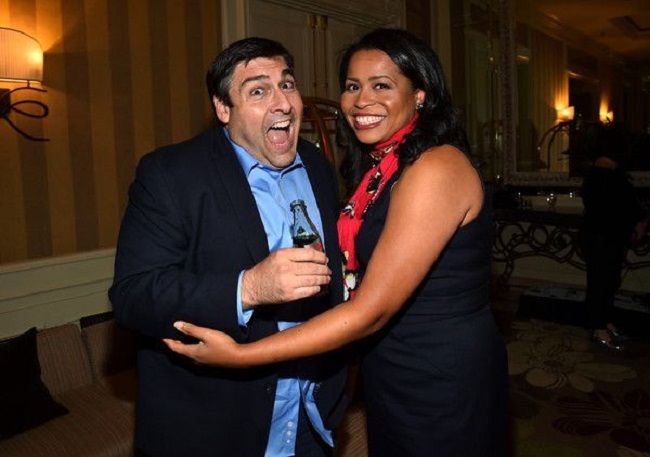 Caption: Adam and his wife attend Variety’s A Night In The Writers’ Room on June 9, 2015, in Los Angeles, California
Source: Pinterest

Pennsylvania Native Adam had begun writing theater plays at the age of 15. Similarly, he even penned numerous plays before graduation which were staged around the country.

He had written more than 50 plays by the age of 18. In 1995 he won the Anne M. Kaufman Endowment ARTS Award in the National Foundation for the Advancement in the Arts program for Playwriting.

Similarly, he even made it to the finals for the 1997 American Theater Critics Association’s Osborn Award for his full-length play, One on One

After the success of their theater career, he leaned into screenwriting in 2003. He began with his first comedy writing for the sitcom Still Standing.

He worked with the team for four years and ended up as a co-producer. Similarly, he also co-produced the 2016 fantasy thriller ‘Day Watch’ .

Meanwhile, he also teamed up with Picture Machine, Triggerstreet, and college friend Kyle Newman to develop the screenplay for Fanboys. Later it was sold to The Weinstein Company.

On the television side, Goldberg teamed up with Happy Madison. Happy Madison introduced him to King of Kong director Seth Gordon and together they created the 2011 Fox comedy series Breaking In.

Before Breaking In, he contributed to writing for the shows like ‘Secret’ ‘Girlfriend’, ‘Voltron Force’,’ and WordGirl.’ Subsequently, in 2011, he signed a three-year overall deal with Sony Pictures TV.

During this time, he worked on NBC’s ‘Community’ as a producer. In the meantime, he was offered to shoot an autobiographical show about his family titled ‘How the F— Am I Normal?’

Later the show was picked up by ABC and renamed ‘The Goldbergs.’ Besides, she was slow the co-producer for ‘Imaginary Mary’ and ‘The Goldbergs spinoff series ‘Schooled’.

Goldberg is in his early forties but still very healthy and active. He has average height but is slightly overweight with a bulging belly.

Aging has started to get visible with wrinkles on his face and grey hair. However, there is no data available regarding his exact body measurements. 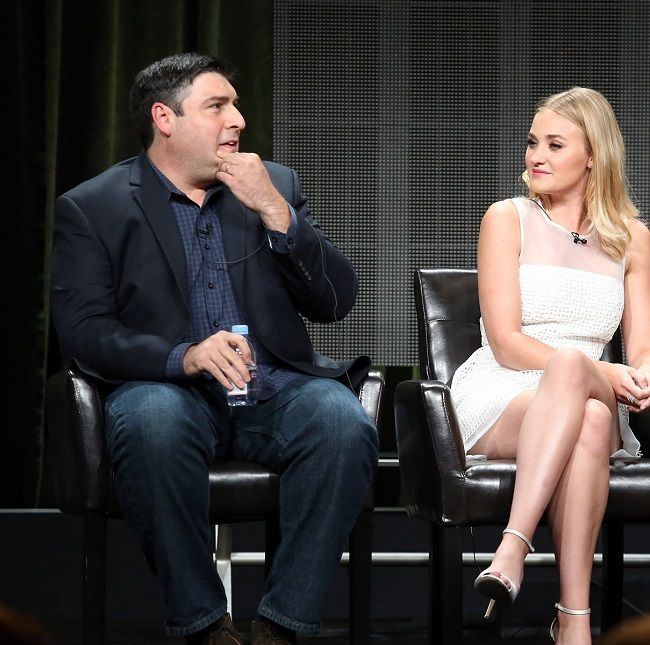 Caption: Adam at the ‘The Goldbergs’ panel discussion at the ABC Entertainment portion of the 2015 Summer TCA Tour at The Beverly Hilton Hotel on August 4, 2015
Source: Getty Images

Talking about Adam’s Internet presence, he is not much of a social media person. He is currently active on Twitter.

However, he has got a strong fan base of 133.8k followers. He goes by the name @adamfgoldberg and mostly shares posts related to his profession.