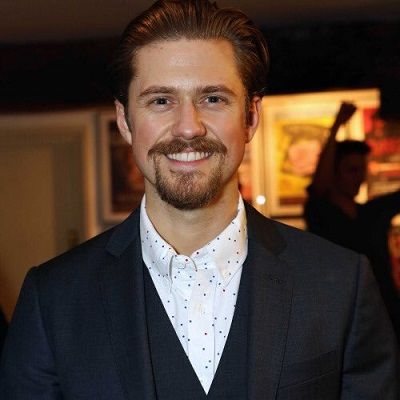 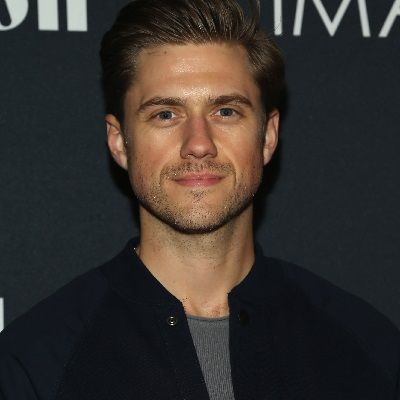 Aaron Tveit is an American actor as well as a singer. Aaron Tveit is famous for portraying the roles of Gabe in Next to Normal, Frank Abagnale Jr. in the stage version of Catch Me If You Can, and Christian in Moulin Rouge! The Musical on Broadway.

He has a brother named Jon who is five years younger. He is a Catholic priest in the Archdiocese of New York. Moreover, he belongs to the American nationality and ethnicity Norwegian. 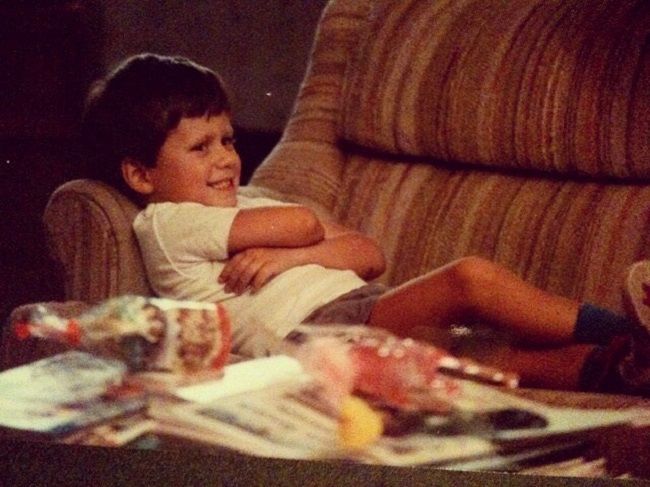 Moving toward his educational background, he attended Middletown High School in 2001. He was active both in chorus and sports, playing golf, soccer, and basketball.

He was performing in all four of his school’s theater productions. As a child, he also played the violin and French horn.

Likewise, he later turned down his business school scholarships to major in vocal performance at Ithaca College.

His decision was supported by his parents as well before switching to musical theater after his first year as he missed acting and theater.

The coronavirus pandemic has disturbed the whole globe. This has affected the members of the Broadway community and has begun to announce positive test results.

The Broadway star, Aaron Tveit, has shared their symptoms, health statuses, and pleas for social distancing.

He wrote through his caption mentioning, that he has been in quarantine since Broadway shows shut down on Thursday, March 12th.

He is feeling much better and feels extremely lucky to have very mild symptoms like a cold with no fever.

As so many people are experiencing much more serious symptoms as this is a very dangerous virus. He has shared a lot of his experience going through his contract with the virus.

Likewise, he has been experiencing a loss of taste and smell, which he thinks is a big sign for otherwise asymptotic people.

He also continued that he has been taking the situation extremely seriously, even before he was tested. Moreover, he wants everyone to understand that this can affect anyone.

Even if someone isn’t feeling sick or showing drastic symptoms, he requested to stay safe, stay healthy, and hope to see everyone at the theater again soon.

He shares his experience with a picture of Miles (his pet dog) because they’re loving all this special time at home with their Humans.

Looking up to his Instagram handle, he shares videos along with his friend engaging with the campaign #GetTheMasksBack along with @andybellin, @hankazaria, and Billy Crudup.

In response to the N-95 mask shortage caused by the COVID-19 pandemic,  they are trying to #getthemasksback to the healthcare workers whom they are certainly necessary.

They are asking everyone with extra masks to donate back or will be trying to purchase back.

They are also taking donations through GoFundMe to help in purchasing these masks for the people. He wrote that he has also donated a mask back.

Other Broadway cast who tested positive

Besides Tveit, the other co-star who was working in the Broadway company has also been caught through Covid-19 and shared their positive test results.

Matt Doyle, Max Clayton, Chad Kimball, and many more have shared their health condition through social media handles. Hope for their speedy recovery and good health.

What is the relationship status of Aaron Tveit?

Reflecting on Aaron Tveit’s relationship status, he is currently single. He has not been in a relationship with anyone.

He hesitated to speak about his private life and prefers keeping it away from the hands of the media.

This handsome hunk is not married to date and does not have any children thus he has not divorced from his date. However, he has not opened his relations yet.

Talking about his past relationship, he was in a relationship with musical theater actress Jacqui Polk from 2005 to 2007.

He does not have a girlfriend right now and also does not go out with many women in public. He seems to be shy regarding his relationships and thus does not have many.

Talking about Aaron Tveit’s professional life, he has had a remarkably successful and diverse career, on stage and screen.

Looking back to his initial acting phase, he joined the national tour of Rent as Steve in 2003.

Take a look back on his Broadway stage career, he made his Broadway debut in Hairspray as Link Larkin in 2006. In June 2008, he played in the company of Wicked as Fiyero.

He engaged himself two runs in the show, the first show lasted for five months, and the second, just two, before starting Next to Normal.

In 2008, he starred as Gabe in the off-Broadway production of Next to Normal. It was initiated at the Second Stage Theatre.

In November 2008, he appeared in Wicked to reprise his role in Next to Normal during its run at Arena Stage.

In the summer of 2009, he played the role of Frank Abagnale Jr. in Catch Me If You Can. Likewise, in August 2010, he performed in the Hollywood Bowl production of Rent, as Roger.

He earned nominations for his role as Frank Abagnale Jr. and others the Drama League Award for Distinguished Performance, the Outer Critics Circle Award for Outstanding Actor in a Musical, and the Fred Astaire Award for Best Male Dancer on Broadway.

After Catch Me If You Can, he took a break from Broadway. Then, he had a huge breakout role in the 2012 film version of Les Miserables with the fan-favorite role of revolutionary Enjolras.

The film led to his performance alongside the cast at the 85th Academy Awards ceremony.

In June 2013, he appeared on the USA Network television series, Graceland. This show lasted for three seasons and was withdrawn in October 2015.

He made his West End debut in Assassins in November 2014, portraying the role of John Wilkes Booth.

On January 31, 2016, he appeared in the premiere of Grease Live, the televised live production of the musical Grease on Fox.

He portrayed the lead role and was featured on the Grease Live soundtrack, which was also released that year.

After the end of Graceland, he was cast in a variety of other television and film productions.

Likewise, he appeared in CBS’s summer series BrainDead opposite Mary Elizabeth Winstead premiered on June 13, 2016.  The show ended after one season on October 17, 2016.

Then, he had time to perform more concerts in 2017 and also played a reprisal of his role from The Good Wife on an episode of The Good Fight and even starred in the independent film Created Equal in early 2018.

In November 2017, he engaged in a developmental lab for the stage adaptation of the 2001 movie Moulin Rouge as Christian.

In April 2018, he announced that he would be reprising his role in the premiere engagement of Moulin Rouge! at Boston’s Emerson Colonial Theatre.

For the iteration of Boston and Broadway productions of Moulin Rouge!, he had a recurring role as the aspiring politician Matt Dobbins on the 2019 CBS show The Code.

Similarly, he starred as a Christian in the Broadway production of Moulin Rouge! at the Al Hirschfeld Theatre which started on June 28, 2019.

The production had its opening night on July 25.  However, the production was put on hold beginning March 12, 2020, due to the Covid-19 pandemic. 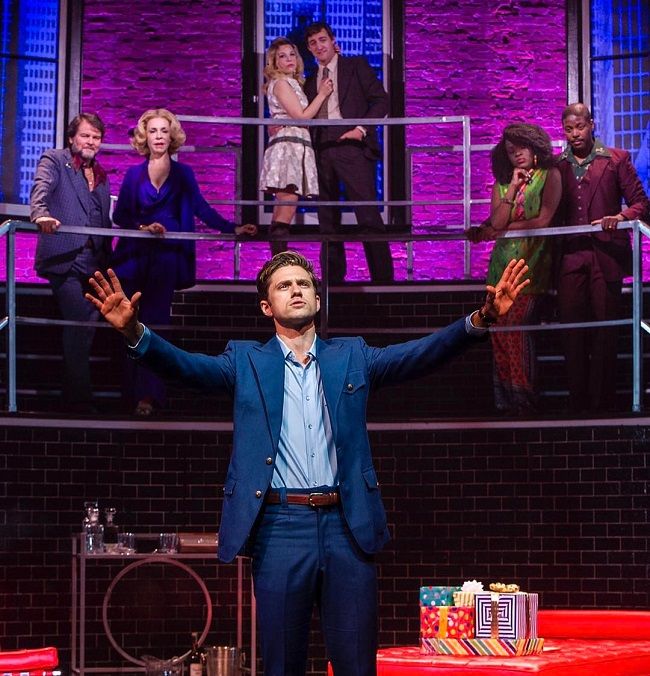 Besides his acting career, he hosted the 2016 Stockings with Care Benefit Gala at the Bowery Hotel Ballroom.

The following organization presents holiday wishes to homeless families and those in assistance programs. Likewise, he partnered alongside The First Tee in Spring 2017. Additionally, he is an avid golfer.

Talented and hard-working Aaron Tveit has received several awards throughout his acting career as well as got nominations for his characters.

Likewise, he won the Lucille Lortel Award for Outstanding Featured Actor for this role.

He was awarded the 2009 Helen Hayes Award for Outstanding Supporting Performer in a Non-Resident Production. For his role as Gabe, he won the Clarence Derwent Award from the Actors’ Equity Association.

Throughout his television & film and theatre career, he has been winning many awards and also performed in the function.

He has even won MTV Movie & TV Awards for Best Musical Moment Grease Live! in 2017 and  Best Actor for his role in Created Equal.

Speaking on Aaron Tveit’s earnings, he is a famous actor who has earned a decent sum of money throughout his acting career.

His main source of income is the entertainment field.  His estimated net worth is around $5 million. Likewise, he is one of the most handsome men in

Hollywood has worked in several movies and TV series and has an average salary is around $51k a year. He is living a lavish lifestyle with his great fortune. 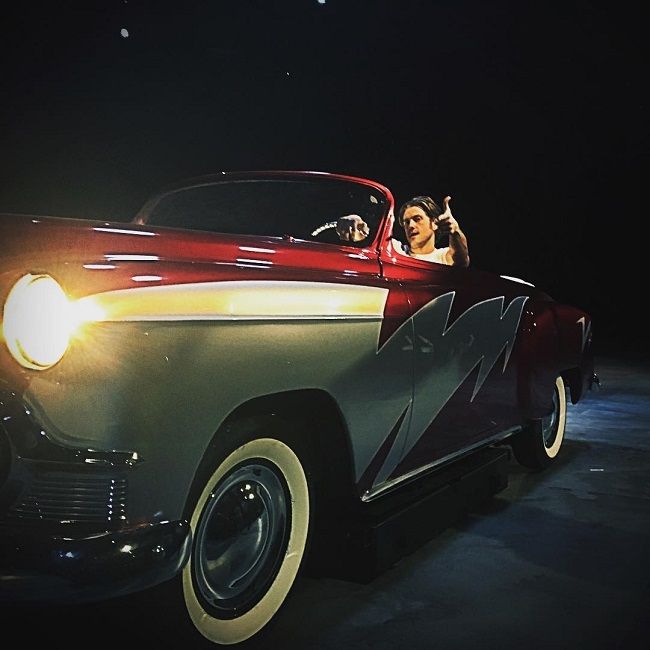 There are no notable scandals and controversies regarding his personal as well as professional life. However, there was an outbreak of rumors that the handsome hunk is gay and is dating actor Darren Criss.

Further, there have been many rumors about Aaron, but a maximum of them are not true. Likewise, he has been successful in maintaining a good image in the entertainment industry.

The 36-years-old handsome hunk Aaron Tveit has a good personality with a great height that stands around 6 feet. He weighs around 75 kg.

Likewise, he has a pair of blue eyes with dark blonde hair color. His body measurements are 32-26-32 inches.