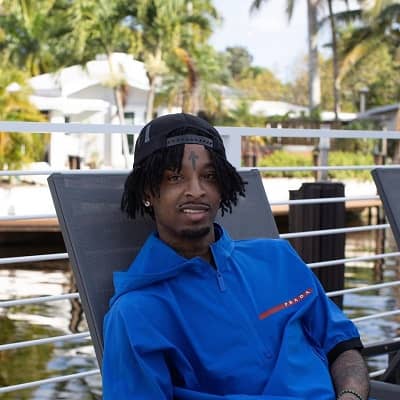 21 Savage is a young and prominent British rapper, songwriter, and record producer. 21 Savage is famous for several of his mixtapes, EPs, and albums like The Slaughter Tape, Savage Mode, Issa Album, Without Warning, and I Am > I Was among several others.

21 Savage was born on 22 October 1992 and he is currently 29 years old. He hails from London, England, and his zodiac sign is Libra. Likewise, his full name is Shéyaa Bin Abraham-Joseph. His parents, mother Heather Carmilla Joseph and father Kevin Cornelius Emmons welcomed 21 Savage at Newham Hospital in the Plaistow area of London.

Talking about his family’s origin, his parents are both of Caribbean origin. 21 Savage’s mother’s family is from Dominica and his paternal grandfather was Haitian. Moreover, 21 Savage’s father is from St.Vincent & the Grenadines. Furthermore, 21 Savage’s father and twin sisters continue to live in London. There, his father – Kevin – works for Westminster City Council.

Moreover, he has twin sisters namely Kyra and Jayda Davis. His twin sisters are dance choreographers. He grew up in Atlanta from the age of 7 years alongside his mother. 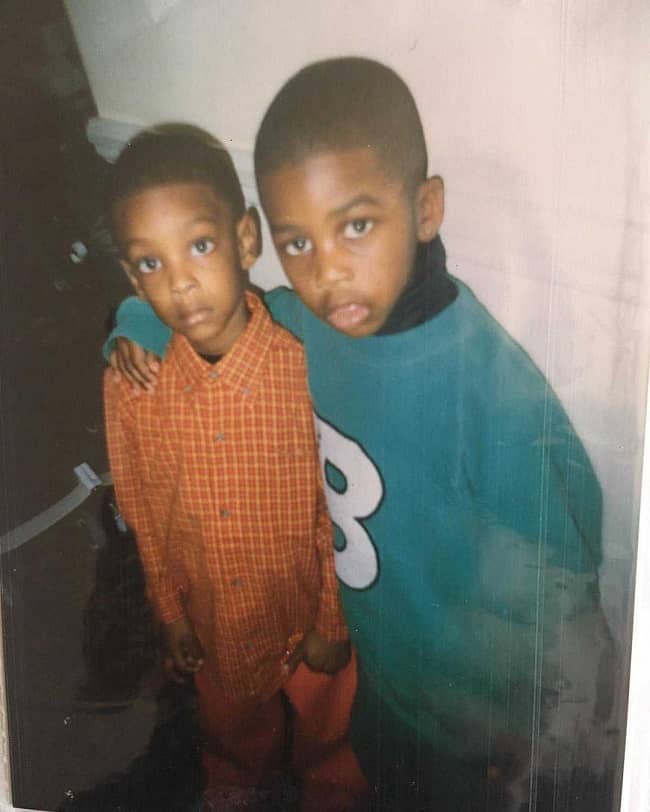 Caption: 21 Savage was captured with his younger brother in a childhood photograph. Source: Instagram

In the 7th grade, DeKalb County School District permanently banned the young 21 Savage from every school in its area. This was due to gun possession. This eventually led the young rapper to begin attending schools around the Atlanta metropolitan area. This was before the authorities sent him to a youth detention center.

After coming out from the youth detention center, he completed 8th grade through an alternative program. Later on, the young rapper finished a semester of high school and then dropped out in his freshman year following multiple exclusions that “exhausted” him.

After dropping out, the young rapper joined a local street gang affiliated with the wider Bloods gang. He eventually became a full-time drug dealer who mainly sold cannabis. 21 Savage also took part in other criminal activities like robbery and car theft regularly. However, 21 Savage was only arrested once after the authorities found contraband in a car that 21 Savage was driving.

Then in the year 2011, 21 Savage’s “right-hand man” Larry was killed in a shootout. The rapper was only 19 years old back then. Then in the year 2013, 21 Savage was shot six times by rival gang members. During this incident, he lost his best friend Johnny. This was during an attempt at robbery on 21 Savage’s 21st birthday. The next year, i.e. in October 2014, the authorities convicted 21 Savage of felony drug charges in Fulton County, Georgia. 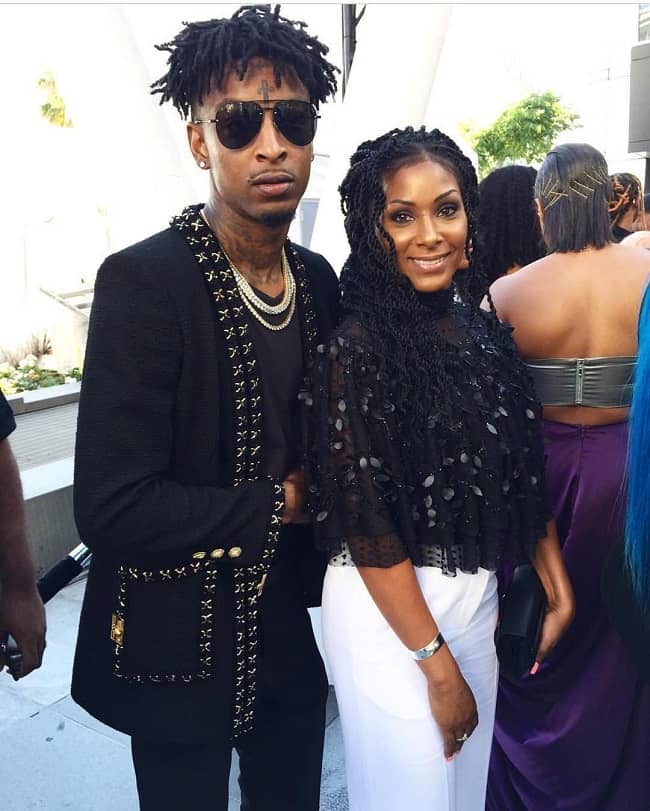 Caption: 21 Savage posing for a photo with his mother. Source: Instagram

Professionally, 21 Savage is a prominent rapper, songwriter, and record producer. The young rapper gained fame for his 2015 mixtape The Slaughter Tape. Then in the year 2016, 21 Savage gained even more attention nationwide after he released an EP with producer Metro Boomin. This EP is titled Savage Mode. Some of the popular singles of this EP are “X” and “No Heart”.

The same year, 21 Savage collaborated with Offset and Metro Boomin for the album Without Warning. The young rapper released his first #1 single in 2017 with his feature on Post Malone’s Rockstar. This got nominated in two categories at the 61st Grammy Awards. Likewise, 21 Savage’s second album is I Am > I Was and he released it in 2018. 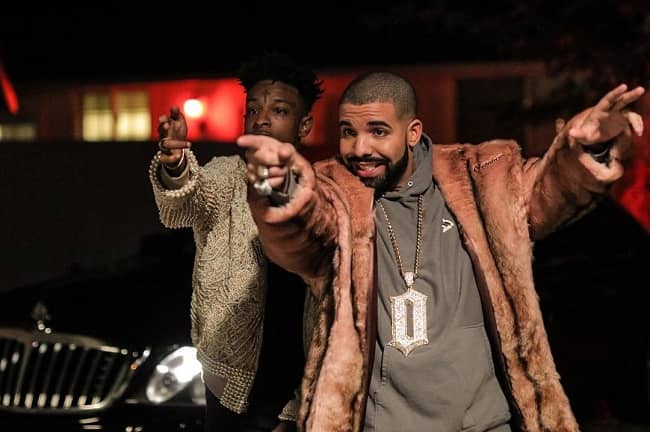 Furthermore, the U.S. Immigration and Customs Enforcement (ICE) arrested 21 Savage on 3 February 2019. This was because he was a British citizen who entered the U.S. in July 2005. The rapper unlawfully overstayed his visa when it expired a year later, i.e. in the year 2006.

Eventually, 2the officials granted the young rapper a bond on 12 February and he was released the next day. Further, the young rapper won the award for Best Rap Song for his song A Lot. He bagged this achievement at the 2020 Grammy Awards. This marked both 21 Savage’s and J. Cole’s first Grammy wins.

Furthermore, the young rapper’s long-awaited sequel collaboration with Metro Boomin was Savage Mode II. They released this in October 2020. This album also debuted at #1 on the Billboard 200. 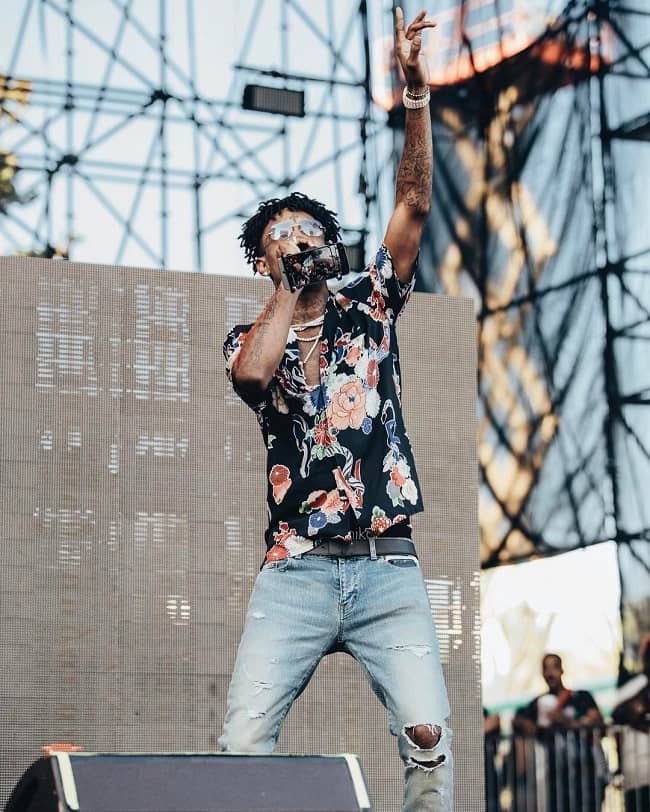 He was romantically involved with Amber Rose from June 2017 to May 2018. Amber is a famous model. The then-lovers went their separate ways in 2018. Other than this, it seems like he has not been romantically involved with any other people. Although their names are not shared, 21 Savage has three children. There is also no information available on kids’ mothers either. As for 2022, he is single.

21 Savage stands at an approximate height of 6 feet or 1.83 meters and his body weight is around 161 lbs or 73 kgs. Other than this, there is no further information regarding the young rapper’s other body measurements like chest-waist-hip measures, biceps, dress size, shoe size, etc. Moreover, the prominent British rapper has dark brown eyes and hair of the same color. The young rapper also has numerous tattoos all over his body.

Likewise, the young rapper has over 4.2 million followers on his official Facebook page and he also created his official YouTube channel on February 9, 2014. This YouTube channel has garnered over 3.28 million views and 7.44 million subscribers as of mid-2021. Moving on, the prominent young rapper has a net worth of approximately $12 million US dollars.